Inside the playbook: Rivers beats the Giants

Click here for the previous edition of Inside the Playbook: Porter’s Super Bowl INT

Previously here at the NFP, we talked about the concepts and the techniques of the 2-Man coverage — a 2 Deep, man-under defense using trail technique (align inside, force outside release, play to the back hip of the receiver). We used the chalkboard and the TV tape of the Packers-Steelers matchup from last season when Green Bay QB Aaron Rodgers hit WR Greg Jennings for an 83-yard TD pass.

On that particular play, the Packers took advantage of one of the weak spots of the scheme — the middle of the field. Today, we will head back to the chalkboard and to the TV tape of the Chargers-Giants matchup from 2009 to illustrate another weakness of the defense and why it can be victimized in the red zone.

Let’s set it up. The Chargers, down 20-14 late in the fourth quarter, are driving on the Giants. Knowing that New York is a heavy 2-Man defense (even in the red zone), San Diego uses a basic passing concept to attack the corner of the end zone — away from the half-field safety to the closed, or strong, side of the formation. 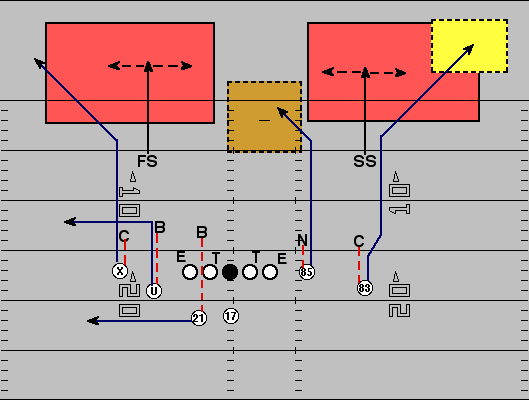 As we can see, the Chargers run a basic 7-Flat combo to the open or weak side of the formation. The “X” receiver runs the 7-route (or flag route), while the “U” TE (second TE in the game) runs the flat route. RB LaDainian Tomlinson, No. 21, stays in for protection and then check-releases on a swing route.

Playing 2-Man in the red zone is a risk, and although I have been on defenses that believed in the coverage inside of the 20-yard line, if I am coaching I take it out of the playbook once the opposing offense reaches the plus-30 yard line. Why? Simple, because the pressure put on the two safeties is enormous. Think about it this way when looking at the chalkboard: both safeties have to be able to get over the top of the 7-route and rally to any ball thrown down the middle of the field (which is highlighted in gold). As we said above, the underneath-man defenders are in a trail technique. That forces them to sit hard inside with their leverage, allow the outside release and then play from behind.

Yes, it has benefits for inside breaking routes, but when we look at this situation, the Chargers — and Jackson — toast the Giants because of the 7-route: a concept that breaks away from the leverage of the underneath player and runs away from the safety (highlighted in yellow). An easy throw for Philip Rivers.

Check out Jackson’s alignment. With the ball on the far hash, he is aligned inside of the numbers. And, when you look at the “X” receiver on the backside, his alignment — on the bottom of the numbers — is the same considering he is working into the boundary. This should tell the safeties to expect a 7-route. Why? Because WRs need room to run that route. That is the exact reason defenders use the numbers as landmarks. Not only for their own coverage drops but to recognize routes from their pre-snap reads. Offenses need plenty of room to run the 7-route.

If you go back to the TV tape, there is plenty to talk about from a technique standpoint. Let’s start with Jackson. He releases vertically off the line of scrimmage and then adjusts his route to get Webster on his back. WRs will stem their routes like this vs. CBs aligned in a press position to create separation. By doing this, Jackson can now get up field and use Webster’s trail technique against him by breaking away from his leverage — and the distance he has created between the ball and the defender. With Webster, we see poor technique vs. the release. He gets high on his feet, “hops” inside instead of getting a hand on Jackson, and he now has to play catch-up throughout the entire route. That is why he can’t find the ball in the end zone — he is “out of phase” with the WR.

Rivers knew this was 2-Man before the snap. Look at the Giants. There is no disguise whatsoever. The safeties are both already at their landmarks (top of the numbers), the LBs are shifted over the top of their coverage and the underneath DBs are aligned in a press-man look. No creativity at all, and because of that, Rivers knows that he will have Jackson running to the corner of the end zone, away from the safety, with Webster trailing the play. It looks like 7-on-7 out there instead of a defense protecting a lead late in the fourth quarter.