Inside the playbook: Rodgers to Jennings

Click here for the previous edition of Inside the Playbook

Let’s talk about 2-Man coverage today, and more specifically, how to beat one of the lead defensive calls in the NFL on third-and-medium to third-and-long situations. We will use the chalkboard and the TV tape to highlight how the Green Bay Packers’ Aaron Rodgers connected with WR Greg Jennings vs. the Steelers 2-Man look.

And, in this particular play, the Packers got the matchup they wanted — all because of the scheme.

Previously, we broke down the Tampa 2 coverage — a 2-deep, 5-under zone defense that is still a core call for multiple teams in the league. In 2-Man, the concepts are similar, except we are looking at a defense that wants to play man coverage underneath with two deep safeties providing help over the top. And, just like the Tampa 2, there are holes — especially down the middle of the field</p>

The Packers are in their "Posse" or 311 personnel (3 WR, 1 RB, 1 TE) vs. the Steelers Nickel sub package that has an exotic look up front (2 DL, 4 LB, 5 DB). Pittsburgh runs a DL stunt with the Nose and the DT (who is in the standing position) and plays 2-Man in the back end. A good call vs. the Pack in a third-and-5 situation.

Green Bay runs two route combinations: the Slant/Flat to the closed side and the Smash/7 to the open side — with Greg Jennings (aligned inside as the No. 3 WR) running the inside vertical seam. 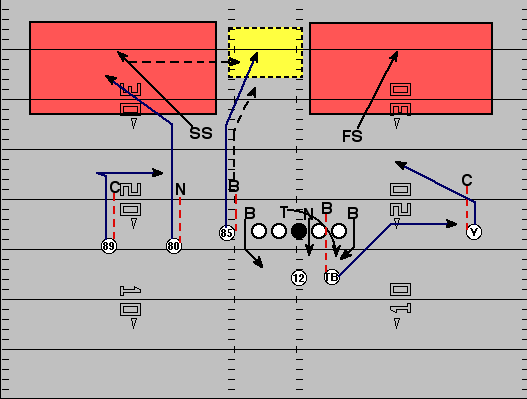 The idea behind 2-Man is simple — allow your underneath players to play man coverage and cut underneath any inside or outside breaking routes due to the safety help over the top. Those underneath man defenders are playing what is called a “trail technique,” which teaches them to sit hard inside with their leverage and play to the inside hip. Force an outside release and then try to steal one by breaking underneath the receiver when he makes his cut.

Third-and-5? Sounds and looks like the right call to me.

However, the NFL game is all about matchups — and the Packers win this matchup because of their pre-snap alignment.

Look back at the chalkboard: TE Jermichael Finley (the “Y” receiver) is aligned as the “X” receiver backside. Nothing new there as we see teams such as San Diego, Dallas, Baltimore, etc. align their TE as a WR to cause matchup issues vs. a CB. It is a common alignment on Sundays.

But, what this does is allow Green Bay to align Jennings inside as the No. 3 to the open side — and that puts him on a linebacker. The WR is aligned out of position for a reason — he is getting the football. And, what we will see in the TV tape is Lawrence Timmons trying to cover Jennings off of the line of scrimmage — with a free release.

Think about it: a linebacker trying to turn his hips and run with Jennings down the middle of the field. Get real.

I said above that the Packers are running a Smash/7 to the open side and a Slant/Flat to the closed side. But, the Smash/7 is important because of the 7 route (or flag route) run by WR Donald Driver. What this does is widen the SS off of his landmark (top of the numbers) and force him to play over the top of Driver. In reality, this opens up the middle of the field even more. The SS, Tyrone Carter, now has to come from outside-in to try and make a play on Jennings. The FS back side, Ryan Clark, has to sit over the top of the slant route.

Even with the downfall of 2-Man in the middle of the field, the throw from Rodgers still has to be near perfect — and it is. If Rodgers doesn’t deliver the ball on time and on the upfield shoulder of Jennings, both the SS and the FS will have time to overlap the middle of the field and make a play. The Packers have the perfect route combinations and the matchup they want with Jennings on Timmons — but at this level it still has to be done correctly to see success.

2-Man is still a great call — even with the result we saw today. Safeties love playing it because they have opportunities to come downhill on routes and take more chances knowing that there is man-coverage underneath. But, the middle of the field is always an issue. In the red zone, this coverage can be a nightmare vs. any offense that uses either the TE or any WR in the inside vertical game. And, as we saw above, the safeties act as the last resort — the final level of defense — but they still need to make a play on the football to see this coverage succeed.