Inside the playbook: Rodgers vs. Giants' 2-Man

Can the Giants limit the Packers on Sunday playing 2-Man in the secondary? A topic I have discussed throughout the week when it comes to game planning QB Aaron Rodgers and the Green Bay offense.

I have no issues with 2-Man (2-deep, man-under) in certain game situations. This coverage allows your defensive backs to play in a “trail-man position” (inside leverage, low on the hip) to take away inside breaking routes (slant, dig, etc.) with safety help over the top. Very similar to Tampa 2 (Cover 2) with man coverage principles underneath.

However, the middle of the field is an issue when you can widen the 2-deep safeties off of their landmarks (top of the numbers) and target the deep post (or seam) inside the hash marks. Let’s take a look at how the Packers can spread the field and target speed on the post to split the two safeties. 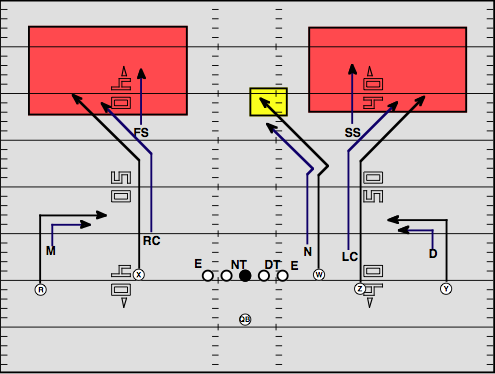 1. Speed inside the numbers: The Packers spread the field in an empty alignment with both TE (Y) Jermichael Finley and RB Ryan Grant (R) removed from the core of the formation and the No.1 receivers to the closed (strong) and open (weak) side. Because of this, the Packers can get speed inside of the numbers with WR Jordy Nelson (W) as the No.3 to the closed side matched up vs. a nickel corner (N).

2. Route concept: This is a base Smash-7 (corner) route on the outside. Greg Jennings (Z) and Donald Driver (X) will take a vertical stem up the field, break on the 7 cut and force the safeties to widen off their landmarks. A key to creating room in the middle for the field for Nelson to work.

3. “Trail-man” technique: In 2-Man DBs are taught to play to the bottom hip of the WR, mirror his release and hold inside leverage. With the 2-deep safety look over the top, DBs want to undercut routes inside of the numbers and react to the outside breaking concepts (out, option, comeback). However, vs. a vertical concept there will be separation up the field.

4. Nelson’s route stem: I added a slight stem to the corner from Nelson here to create even more separation vs. the nickel. Add in the safeties playing over the top of the 7 routes and Nelson now has a one-on-one matchup vs. a DB playing from a trail position. Both safeties will overlap on the throw, but they won’t make this play with Rodgers at QB. Give the advantage here to Green Bay.

Will we see this route on Sunday up at Lambeau Field? Its possible if the Giants want to play 2-Man vs. the speed and depth of the Packers skill positions. Like I said above, 2-Man is a solid call, but every defense can be beat in the NFL if you get the right matchup.