Inside the playbook: Roethlisberger vs. Patriots

Let’s go back to the Patriots-Steelers matchup from Sunday and take a look at Ben Roethliberger’s TD pass to Antonio Browns. A good opportunity to talk route concepts, coverage and defensive technique in the red zone.

A quick set up before we check out the Steelers’ pre-snap alignment and the video replay. Pittsburgh has their “Kings” personnel (4 WRs, 1 TE) on the field in an empty alignment vs. the Patriots' Cover 2 scheme.

Run the Flat-7 (corner) combo and target Brown on the “whip option” in the flat. 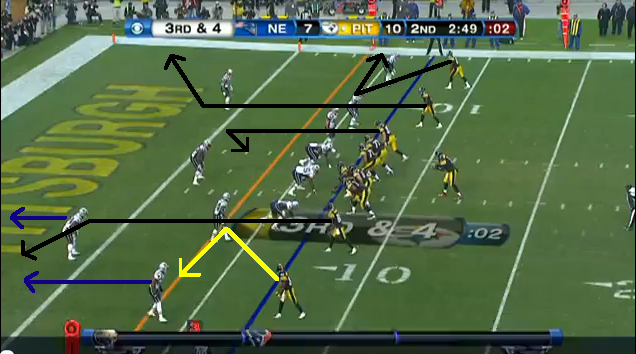 - The Flat-7 is a great call vs. Cover 2 because it puts stress on the safety and the CB. Test the top of the defense and force the CB to sink and protect the safety vs. an outside breaking route to the corner of the end zone.

- Use the “whip options” from the No.1 (X, Z) receivers. Brown is going to stem his route hard to the inside (can also be used as a Cover 1 beater) and break back to the flat.

- Read deep to short. Roethlisberger wants to throw the 7 cut. That is his initial read based off the drop of the CB. If the CB “squats” in he flat, throw the 7. If he sinks too deep, target the flat.

- In a 2x2 set, the Steelers run the 7 route from inside the numbers for two simple reasons: space and a free release. Aligned outside of the numbers, a WR has to win vs. a rolled up CB in Cover 2 and stem his route to create enough room to break back to the corner of the end zone.

- TE Heath Miller aligns as the No.3 receiver to the closed (strong) side of the formation and is the check down option for Roethlisberger out of the empty look.

- The Patriots go with a three-man rush and drop eight into coverage—with six DBs on the field. And if you can’t get home with three, Roethlisberger is going to have plenty of time to work the open side CB. A big part of why Brown was able to come open in the flat.

- Watch the open side CB, Antwaun Molden. Solid technique at the line of scrimmage to mirror the inside release of Brown, snap the hips and sink at a 45-degree angle. However, with Roethlisberger having time to throw, Molden drops too deep into the end zone. As I said above, the CB has to “protect” the safety, but this turns into a bracket coverage on the 7 cut—leaving the flat vacated.

- The Patriots have the correct call on the field to play the Flat-7 with their Cover 2 shell. Take away the 7 route and force the ball to go to the flat or Miller on the check down. But when you only rush three, zone coverages inside of the 10-yard line open up. This turns into a 7-on-7 drill for Roethlisberger with time and an easy throwing lane from the pocket to expose the defense.