Inside the playbook: Tebow's impact

Today: Tebow and the Load Option

I have always been a fan of option football: the inside and outside veer, the triple option, the speed option, the read option we see from spread offenses in today’s college game, etc. Running these schemes as an offense puts a lot of pressure on the defense from a responsibility perspective. Who takes the QB? Who takes the pitch?

But, we don’t really see it at the NFL level. Yes, we have the ‘wildcat’ and the many possibilities it can bring. But a true option? Maybe, with Tim Tebow out in Denver. Is this a way Josh McDaniels gets the first-round QB on the field? Possibly as a red-zone weapon?

Today, let’s break down an example of the Load Option from Urban Meyer’s offense in Florida and use the TV tape of the Gators-‘Noles game from 2009 to highlight why it could become part of the Broncos’ playbook.

It looks like a lot going on, but when we break it down, we will see that the Gators are running a basic Load Option and “reading” the last man on the line of scrimmage. 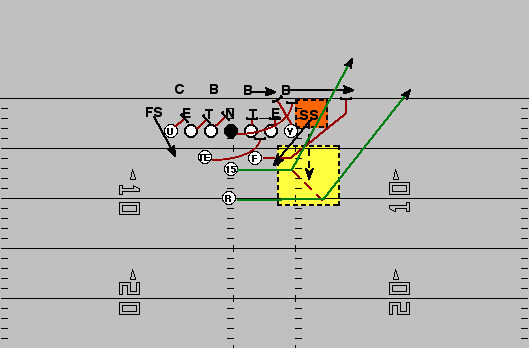 Coach Meyer uses creative formations down in Gainesville—and we see that here. But, you can run this exact play out of a double-tight look with a wing, the Power I and the old-school wishbone we saw from Oklahoma in the 1980’s. How you line up doesn’t really matter—because it is still option football.

The rest? Backside scoop blocks by the O-Line, with Tebow and the RB optioning the SS. If the SS crashes to the QB, he pitches to the RB. If the SS gets up field, the QB keeps the ball. Option football is basic from an offensive standpoint. One man remains unblocked, and the QB forces him to make a decision.

As we can see from the TV tape, the ‘Noles are crashing the SS and FS. A technique used by defenses to force the ball to bounce outside. The safeties will “spill” any lead block and make the ball carrier bounce outside to defensive pursuit. Here, we see the complete opposite in the execution by Florida State. The SS gets hung up on the TE trying to get to the second level of the defense—and now Tebow can just keep the ball and walk into the end zone because of the lead blocks in front of him. The SS essentially takes himself out of the play—and there is no one to option off of.

Can it be run at the NFL level? 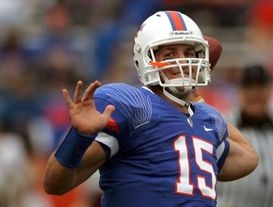 ICONExpect to see Tebow on the field as a rookie for the Broncos.

Of course, if you have the right personnel. Running the option takes practice and it is best when someone who is used to carrying the ball runs it. That is why we see it fail so often when a WR is used in the wildcat of today’s NFL. They don’t have a ton of experience pitching the ball or reading an end man on the line of scrimmage. The defense will be faster to react in the NFL for sure, but with Tebow, this is a real package that can be used—and used effectively. Why not insert it into the game plan and try to create a big play or put the ball in the end zone? And, let's not forget what you can do in terms of the passing game in these situations. Plenty of opportunities.

Like we mentioned above, defenses have to be fundamentally sound when playing the option. Play your responsibility or give up a big play. As a former defensive player myself in this league, creative formations and packages that go against the normal game plan are tough to prepare for. They take extra practice and meeting time—and cause confusion. Because of this, I would expect to see Tebow on the field this season in some sort of creative package where the Broncos and Josh McDaniels could force the defense to make a mistake. Is it a go-to play in a crucial situation? Probably not, but that doesn’t mean it can’t produce results in this league.