Inside the playbook: the Miami wildcat

Click here for the previous edition of Inside the Playbook: Rodgers to Jennings

The wildcat offense has become the rage ever since the Miami Dolphins put it on display in 2008 against the New England Patriots on the road in Foxborough. It has since been copied and mimicked, but the results are never as dominant as they are down in South Florida when Miami puts it to work.

The reason why is pretty simple: the Dolphins use a creative formation to run their basic off-tackle power running game, and the ball carriers are used to having their hands on the football.

We see it all over: Josh Cribbs in Cleveland, Devin Hester in Chicago, Michael Vick in Philly, etc. It is a gadget offense when these guys are in the game. But, in Miami, the Dolphins use Ronnie Brown and Ricky Williams — two players who are used to running downhill — in the basic Power O. Essentially, the Dolphins use window dressing to produce in the power run game.

Today, we will use the TV tape from that ’08 game in Foxborough to break down the wildcat and gain a better understanding of how it works.

Before we get to the chalkboard, let’s set it up. Miami is in its wildcat personnel (2 TE, 3 RB) with a “tackle over” look as the LT, Jake Long No.77, aligns to the strength of the formation as a TE. The Patriots are in their Heavy personnel (4 DL, 4 LB, 3 DBs) and use a 4-4 front inside of the 5-yard line. 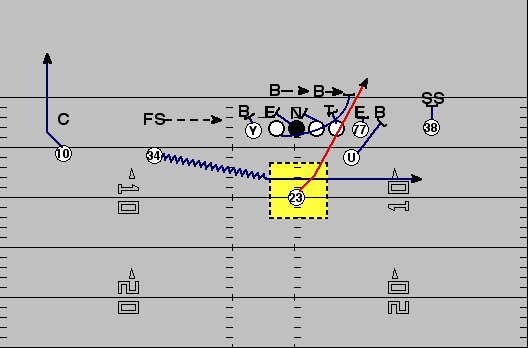 To start, let’s go back to the Dolphins pre-snap alignment.

The “U” TE (second TE in the game) basically takes the place of a fullback and aligns to the strength of the formation — a similar setup to what we saw from Urban Meyer’s offense in Florida last season with Tim Tebow at QB. He should tell the defense where the ball is going.

As I said above, the Dolphins run the Power O. It is a standard off-tackle running play that every team in the NFL has in its playbook. It consists of a kick-out block (done here by the “U” TE) and the backside guard pulling through the hole and up to the second level of the defense — looking for the first opposite-colored jersey. That is why the front side blocks down, the strong side linebacker is left for the pulling guard and the hole opens up.

But, this is an exotic formation, highlighted by Williams using pre-snap motion to simulate a mesh point (highlighted in yellow), consistent with that of the college read-option out of the spread. Only here, in Miami, it is a predetermined play with Williams acting as a decoy.

Power O all the way. The same play we will see in San Diego, Cincinnati, Baltimore, etc. Only, in Miami there is a lot for the defense to think about before the ball is even snapped based off of the Dolphins alignment.

Let’s check out the TV tape…

Patience by the ball carrier

How often have we seen the wildcat turn into a negative play in the NFL? The reason is simple: lack of patience. You put a WR in the backfield and most often he will take the snap and run head first into the line of scrimmage or chase himself out of bounds by sprinting to the sideline. That is why the mesh point and personnel are so important for the Dolphins. By using the fake option-read with Williams in the backfield, Brown is able to let the guard pull and the down blocks occur. The Power O does take a sense of patience, as the RB has to let the play — and the hole — develop in front of him. Brown has run the Power O since he was at Auburn, and he knows how to let the blocks develop before he picks a hole to run through.

The two inside linebackers for the Patriots in this play are slow in their reads. To defeat the Power O, the strongside ILB has to attack the pulling guard and meet him in the hole. Instead, when we look back at the TV tape, he is slow to read the backfield action and is thus late to the hole — which also prevents the weakside ILB from scrapping over the top to make a tackle. When the center and strongside offensive guard block down, that is a direct indicator to the inside linebackers to come downhill and expect a pulling guard or tackle. Not fast enough for the NFL.

Too often, we want to believe that the wildcat in the NFL is an actual read-option. We may see it from time to time this season with Vick in the lineup for Philly, but most of these plays are predetermined. An actual read-option consists of the QB (or Brown in this case) reading the unblocked DE to either give the ball to Williams or keep it and get up field. But, in this play — and for the most part in the NFL — Williams knew he was a decoy coming out of the huddle.