Inside the playbook: the Packers' zone blitz 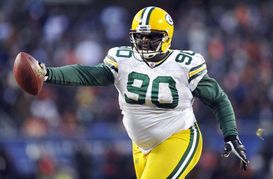 Today, let’s focus on the Packers’ defense under Dom Capers and go back to the NFC Championship game to break down B.J. Raji’s interception return for a TD. A zone blitz scheme (corner cat) with vertical hook players dropping under the inside seam routes.The Bears are in their Posse (311) personnel (3 WR, 1 TE, 1 RB) vs. the Packers 2-4-5 Nickel alignment (2 DL, 4 LB, 5 DB). Show man pressure from the pre-snap alignment and then move at the snap of the ball to create a zone concept in the secondary.

The route scheme from Chicago is a basic Hi-Lo concept with the Z receiver (Devin Hester) on the underneath crosser and the RB (Matt Forte) on the angle route. Run three vertical seam routes (Y, W, X) and work the underneath game vs. pressure. It is a route the Bears ran all season out of multiple personnel groups and alignments. 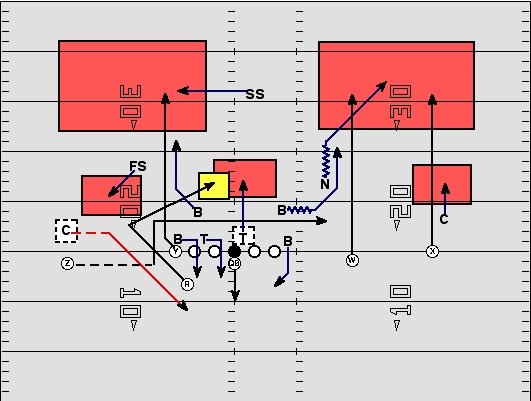 Rush four—and drop seven. That’s it. Whenever you send the corner cat (Sam Shields in this situation), you are playing coverage in the backend and looking to steal a play.

Looks exotic, but the Packers are playing a 2-deep shell with Woodson (N) dropping to the deep half to play over the top of W and X, while the SS moves from a single high look to play over the top of Greg Olsen (Y) on the seam route. Collins (FS) is responsible for playing No.1 (Z) underneath and the open side CB (Tramon Williams) will carry No.1 vertical—and react to anything thrown in the flat. Think of it as a two-to-one read. We used to call it “Gold” under Gregg Williams in Washington and comes straight from Dick LeBeau’s playbook. Drop No.1 vertical to the deep half players if you are tested underneath.

The two inside linebackers are called “vertical hook” players as they will carry any inside vertical seam and use the 2-deep look as protection over the top. Raji will step to the line of scrimmage and then drop into the “middle hook” between the hashes—something that Chicago QB Caleb Hanie didn’t account for.

1. The Corner Cat: You have to pick your spots with this blitz because it can leave a safety in a tough spot if No.1 goes vertical at the snap. However, this is a perfect example of how to run this scheme. With the Bears using a 5-man protection scheme, Shields can use the pre-snap short motion from Hester to help his disguise—and get a free run at the QB. The OLB will occupy the offensive tackle and that leaves the edge wide open for Shields. Nothing better than a CB coming unblocked to the QB’s blind side.

2. Raji’s play: This is great technique from the Packers’ NT. Step to the line of scrimmage (to draw the protection) and then drop into coverage. With Hanie locked onto Forte on the angle route, Raji reads the eyes of the QB and steps right in front of the throw. For a man his size—playing in space—it isn’t going to get any better than that. That’s impressive and it makes the scheme look perfect.

3. Woodson: Talked already about the disguise. That is so important when we look ahead to this Sunday. With Woodson aligning over No.2 (W) this looks like man pressure. But he moves before the snap to drop to the deep half and the Packers now gain the advantage—because the QB is thinking man coverage with the defense playing a zone scheme.