Inside the playbook: the play action game

Let’s talk play action today and concentrate on using creative pre-snap movement to set up the deep ball. We will take a play from the 2009 Detroit Lions and highlight Matthew Stafford’s 54-yard TD pass to Calvin Johnson vs. the Bengals base Cover 2 look.

Not surprisingly, we are once again looking at a defense taking the bait and giving up a big play. Let’s set it up. The Lions are in their base pro personnel (2 WR, 2 RB, 1 TE) vs. the Cincy 4-3 front playing Cover 2 (or Tampa 2) in the back end.

Sounds simple enough. However, the reason I chose this play — besides to show the deep-ball arm of Stafford — is to show how a one-man route can be productive if run in the correct situation with the proper disguise. And, as we will see, the Lions use “ghost” motion from the “Z” receiver to cause confusion.

Let’s check it out on the chalkboard... 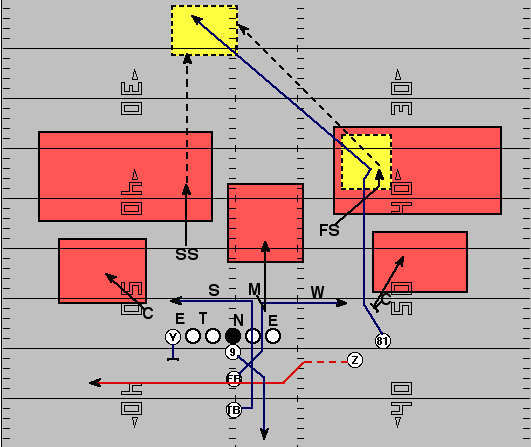 Let’s start with field position. As I have written before from a defensive perspective, when the ball is in between the 40-yard lines, expect something down the field. Or, as one of my coaches told me, “expect the deep ball and react to everything else.” This is where the offense will take a shot, and if you are a deep-half safety playing in a Cover 2 scheme, get some depth and be prepared to flip your hips and run.

The “ghost” motion is a term used when a player removed from the formation (as we see with the “Z” receiver) starts toward the line of scrimmage and then runs through the backfield. This started to gain some popularity when I was a senior in college in the Big Ten and still has a home in creative situations. Add this to the downhill, off-tackle action from the RB and FB (creating a Lead Open look), and this looks like a Lead or a Reverse.

What the Lions have created is a six-man protection (TE stays in to block), one-man route with Johnson on the deep post. His only other option on the play is the check down routes by the RB and the FB and a swing pass to the “Z” receiver as a last resort. Bottom line: he is throwing the deep ball.

In fact, the FS to the open side doesn’t take the bait (like the linebackers do). but as we will watch on the TV tape, his technique gets him beat.

Johnson essentially gets a free release off of the line of scrimmage because of his reduced split (aligned inside of the numbers). In Cover 2 schemes, the CB cannot chase a WR on an inside release. His job is to jam the WR and force him to release inside to protect the safety. But, just like a Randy Moss, when Johnson gets a free release he can get up to top speed on a safety quickly — and eat up his cushion. And, all we really see on the TV tape is a slight head fake to the 7 route (or flag route) that beats the safety. The rest? Simply pure straight-line speed with a safety now on his back. 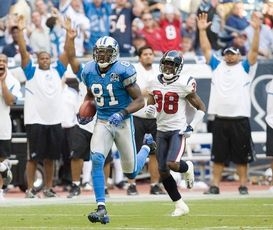 I want to take a moment to talk about the SS in Cover 2 vs. a TE with no WR. Essentially, he is part of the run front and will fill the “alley” between the CB and the DE, but what is more important is the coverage aspect. When the TE gives a “high hat” read (pass set) there is no receiver releasing vertically into the deep half. Because of this, the safety should “push” to the open side of the field and help on any inside breaking route. And, it is alerted before the snap. Because of the slot look to the open side, the SS should look to help. In this case, he is late and is no match for the speed of Johnson and ends up trailing the play.

I talked above about the slight head fake that Johnson gave to the FS. As a safety, you read the hips of the WR and try to ignore any upper body movement. Why? Because for Johnson to run the 7 or flag route, he needs to turn his hips. Never trust the eyes or the head of a WR. In this case, the FS bites and uses what is called an “open angle turn” as he is getting ready to run with the 7. But, when Johnson breaks to the post, the FS has to use a “head whip” and is caught in a trail. A race he can’t win.

We have talked about Johnson, the pre-snap alignment and the play action, but let’s not forget the throw by Stafford. It is perfect. Across the field, on the opposite numbers to a receiver at top speed. An underthrown ball and the FS has a chance to “play the pocket” and get a hand on the ball, and a ball overthrown and Johnson may run out of space. Fifty-four yards on a rope.