Inside the playbook: the Redskins' swap boot 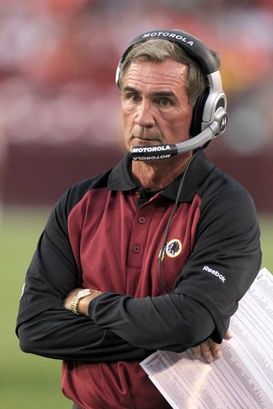 ICONIn Shanahan's offense, the boot game is a priority.

During the preseason, it is tough to draw up formations and schemes on the chalkboard due to the basic and vanilla game plans we see on August weekends. But, with the Redskins, we should discuss a vital aspect to their playbook — because we will see it throughout the regular season.

Mike Shanahan’s offense is big on what I like to call “movement passes.” Going back to Denver — and now in Washington — Shanahan will get the QB out of the pocket using play action (usually misdirection play action) to create a situation where the QB has multiple options: a deep read down the field and an underneath read. The progression is simple — read high to low for the QB.

Today, let’s talk about the “Swap Boot.” Most of us had a version of some sort of boot action going back to our high school playbooks. Roll the QB away from the backfield action and force the defense to over pursue to the run fake. The “Swap Boot” is along the same theory, only in this case, the FB and the closed side (or strong side) TE are the underneath reads coming back across the field.

Let’s set it up and break it down…

I put the offense in regular pro personnel (2 WR, 2 RB, 1 TE) against a base 4-3 Cover 2 (or Tampa 2) look from the defense. This scheme, which is exactly what we will see from QB Donovan McNabb and the ‘Skins, can be run against any front and any coverage — Cover1, Cover 2, Cover 3, etc.

From the perspective of the defense, this looks like an outside zone with the fullback and tailback stepping to the closed side — along with the action of McNabb. Versus Cover 2, the linebackers will flow hard to the closed side, and in this case, the backside Will Linebacker (highlighted in orange) bites like fish and takes the bait — allowing the weak side Hook/Seam to open up. I saw this play multiple times against the Broncos (and QB Jake Plummer) in my career and can say that I was always a big fish in this situation. As a defensive player, you have to trust your run/pass reads, but just like we saw when the ‘Skins played the Bills over the weekend, it usually is wide open. 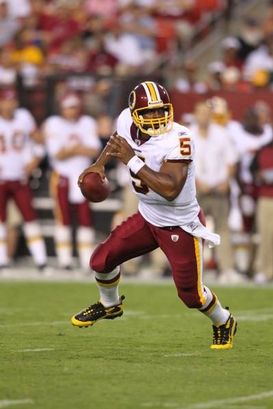 ICONMcNabb will work outside of the pocket in the boot game for Shanahan.

Like we talked about above, McNabb will read high to low. The “X” receiver releases hard outside and vs. Cover 2 will run the deep comeback — trying to settle in the hole between the deep-half safety and the CB who is sinking. Versus Cover 1 and Cover 3, the “X” will convert the comeback to a “9” route (or go route) against any corner that squats on the comeback. That is McNabb’s No. 1 read, followed by the dragging TE on the crosser (which will be Cooley for the ‘Skins), and finally, the FB coming back across the formation. Three reads to the open side for McNabb — along with the deep post down the middle of the field if he has time to read the entire field.

What is the QB seeing?

In this example, McNabb will look at the CB to the open (or weak) side. Does he sink to protect the comeback? Does he squat and play the TE crosser and FB in the flat? With the Will Backer taking the fake, McNabb will use the CB to judge where to go with the ball vs. Cover 2.

How do you prevent it?

Run/pass read is key. Is the O-Line coming off of the ball or are they turning and running? We used to call it "elephants marching." Is the TE blocking down, or is he releasing up the field? Much easier to see on film than out on the field, but defensive players must have the correct reads to have any chance to stop this play. Plus, let's take a look at the "X" receiver. With an outside release (plus a wide split) he can run only two routes: the comeback and the "9." Can't run an inside breaking route with an outside release and not enough room to run the "7" route (flag route). The deep half safety has to know that based off of his alignment and release.

Another key aspect is the split of the WRs. Check out the reduced split of the “Z” receiver. He is aligned on the bottom of the numbers (and often will be aligned inside of the numbers.) Why do this? From a defensive perspective, he can only do two things: crack block in the run game or release on an inside breaking route. In the “Swap Boot,” he is aligned like this to get a clean release and run his route to the middle of the field — which cuts off the distance of the throw the QB has to make across his body.