After the 49ers’ 36-32 comeback win over the Saints in the Divisional playoffs, I wrote up some notes on Vernon Davis. The San Francisco tight end displayed the ability to beat both press and off-man coverage, create after the catch and produce vs. Cover 2 in the red zone.

Today, let’s go back and break down Davis’ game winning TD catch vs. the Saints 2-deep look on the chalkboard. A route concept (skinny post) designed to test the deep half safety and the underneath coverage. 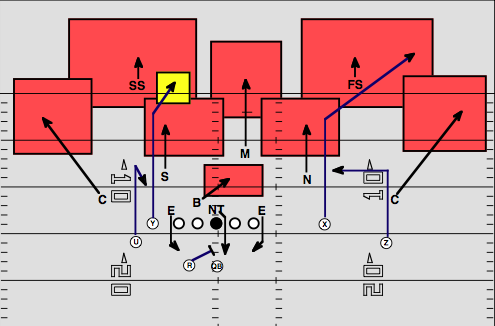 Cover 2 in the red zone: A good call in this situation? That’s how I see it when you consider the Saints are protecting a three point lead. Inside of the 20-yard line, Cover 2 (Tampa 2) adjusts to “Red 2.” Both CBs will play a “soft squat” (no jam) and sink at a 45-degree angle to protect the safety on the 7 (corner) route. With the Mike Backer running the inside vertical seam, the Saints have now created a 5-across look on the goal line to force the ball to go underneath. Eliminate the vertical game into the end zone. Here, the Saints only rush three and drop eight by adding a “spy” (B) underneath.

Route scheme: The 49ers' are in an "Orange" pre-snap alignment (2x2 spread look). To the open (weak) side of the formation, San Fran is running a Smash-7 concept (No.2 WR on the ball is a pre-snap key). A standard Cover 2 beater in every NFL playbook. The X receiver, Michael Crabtree, will stem vertically up the field and break to the corner with the Z receiver running the “Smash” (quick square-in). To the closed (strong) side of the formation, both 49ers’ tight ends (Y, U) align in a “stack look.” Davis (Y) will run the skinny post with the U on the short inside curl route.

Beating the underneath defenders: The Saints two “seam-hook” players (N, S) will drop with added depth inside of the red zone. QB Alex Smith has to target Davis with the Sam backer (S) dropping into the throwing lane and the Mike Backer (M) running the middle of the field. A tight window to put the ball in with the deep half safety over the top. This is a top-tier throw from the 49ers’ QB given the playoff stage and the game situation.

Davis vs. Harper: The Saints’ SS has a clean break and then drives downhill on the throw—exactly how he is coached to play this route. However, this is the matchup issue that Davis creates. With his size (and length), Harper won’t be able to drive through the up field shoulder and make a play on the ball. Great call, route and throw vs. a defense that is designed to limit the offense's ability to put the ball in the end zone.