Former Hawkeye Jeff Tarpinian turned some heads on Monday at the Iowa pro day in front of NFL personnel. With all 32 clubs represented in Iowa City, the linebacker posted some times comparable with defensive backs, according to league sources. 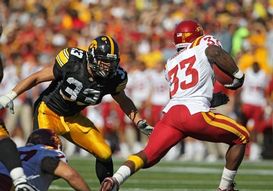 Tarpinian posted 47 tackles and saw action in eight games as a senior after battling through injuries, but did make the start at LB in Iowa’s Insight Bowl win over Missouri. He originally came to Iowa as a defensive back and switched to the linebacker position during spring practice in 2007. Tarpinian was also a productive contributor on the Hawkeyes’ coverage units throughout his career.

With numbers like these, the Omaha native, and former Nebraska Gatorade Player of the Year, should be viewed as a possible special teams standout as a rookie in the NFL.