Is the 'Read Option' here to stay in the NFL?

I’m a big fan of option football (at any level) and when you have the personnel it creates explosive plays on the edge. That's something we saw again Sunday in the NFL.

Think of it this way: the Read Option causes issues starting on Wednesday when the game plans are handed out. That means more meeting time and practice time spent on a scheme that you don’t see on a weekly basis.

Is the Read Option here to stay in the NFL? Maybe. Plus, we should point out that it’s also team specific at this point. We won’t see this scheme run in New England, Green Bay, Denver, etc.

However, it can be a weapon if used in specific game situations.

Look at RG3 and the Redskins. Offensive coordinator Kyle Shanahan has built an entire package around the Read Option out of the Gun, the Pistol and that leads to multiple opportunities in the play action game to test the top of the defense.

Or how about Russell Wilson in the Week 13 win over the Bears in Chicago? Lovie Smith’s defense struggled vs. the option series in OT and that created a scoring opportunity to win the game for the rookie QB.

What did we see on Sunday? Two big runs from quarterbacks Colin Kaepernick and Cam Newton.

Here is a quick view of Kaepernick: 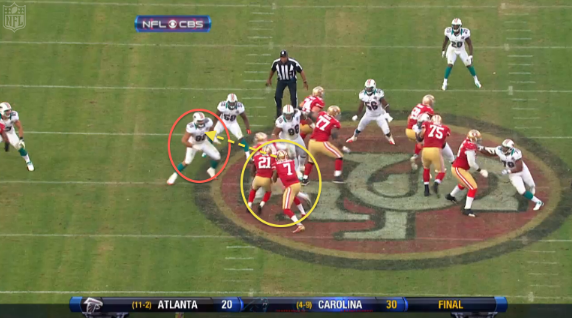 Like any option play (Read Option, Veer Option, etc.), Kaepernick is going to ride the RB through the mesh point and read the end man on the line of scrimmage. With the TE/H pulling around to work up to the second level (LB), Kaepernick can ride RB Frank Gore (Pistol alignment) on a downhill path and make his read. 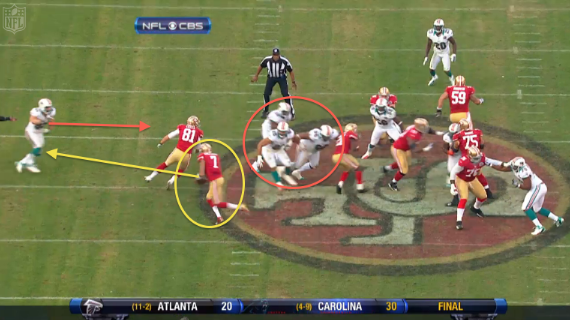 The Dolphins take the bait here and Kaepernick has second level blockers to work with. After that his athletic ability (and speed) takes over as he turns this into six points. 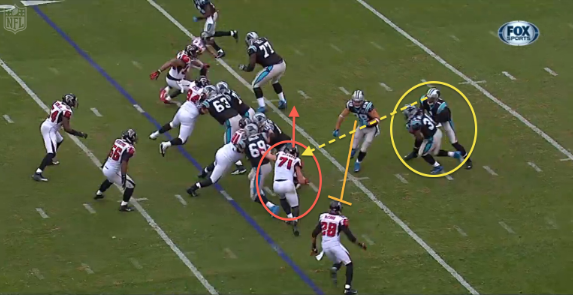 Same scheme as the Niners (out of the Gun) with the TE/H pulling to block the safety. Newton will ride DeAngelo Williams through the mesh point and read the DE. If the DE stays up the field, give the ball to Williams. And if the DE crashes down the line of scrimmage, Newton will keep, play off the block of Greg Olsen and get vertical. 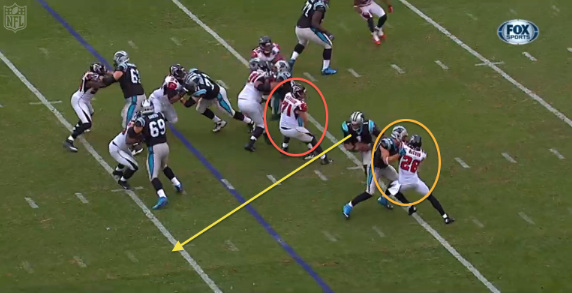 Check out the set up for Newton here. Olson gets the kick out block (think of the Counter OF) and Newton has a clear running lane to get square to the line of scrimmage on a play that turns into a 70-plus yard TD run.

Again, the Read Option isn’t a scheme we are going to see as a top package in the NFL. But I don’t think we can call it a “gadget” offense if you mix it into your regular game plan that includes the drop back passes, boot action (play action), 3-step route tree, etc.

And looking at this from a coaching perspective, do you have an answer to limit the Read Option on a consistent basis? A scheme that will test the eye discipline and technique of your players? That's tough work.