It is all about the quarterback for the Jets

You think there is pressure on Jets QB Mark Sanchez this week with the Patriots and Tom Brady coming to town? Getting off to an 0-2 start in the NFL forces you to put together an early season run in the win column — and that is tough to come by.

On Monday night against the Ravens, we all saw the same thing: a QB who didn’t challenge the secondary. Take the check down and put the ball in someone else’s hands. Let the RB make a play. 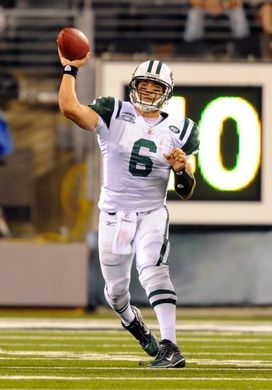 Can’t have that from your starting QB.

Sanchez doesn’t have to put up the numbers we are accustomed to seeing from Brady, Peyton Manning, Drew Brees, etc. That isn’t the style of football the Jets play under Rex Ryan. However, he does have to make the throws when the situation presents itself. Third and long, in the red zone and in a two-minute situation when his team needs to get in field-goal position to win a game.

Ryan’s defense is going to continue to force turnovers and continue to provide Sanchez and that Jets offense with ideal field position throughout the season. But, the Jets need touchdowns. They can’t continue to settle for field goals and waste scoring opportunities — especially against a team such as New England. To beat Brady you have to put the ball in the end zone.

Force offensive coordinator Brian Schottenheimer to expand and open up that playbook — or give him a reason to. Use WR Braylon Edwards and TE Dustin Keller in the passing game. Yes, the 3-step slant, the hitch and the play-action game (boots, sprint, dash) will always be there. But, we are talking about big plays. And, to get those in this league, you have to challenge defenders. Throw the deep post, the 7 (or flag) route, the double move. And, in third and long, deliver the ball on time in the intermediate passing game. Move the sticks, put drives together and give that defense time to rest on the sidelines.

Yes, there are other areas of the Jets offense that need to be discussed (such as the running game), but it still starts with the QB. You want to challenge for the AFC East, then the QB has to play. The same can be said down in Miami with Chad Henne or in Buffalo with Trent Edwards.

But, it is magnified in New York with expectations and hype — the same hype we have all listened to since the Colts sent this team home in the AFC Championship game last season.

I don’t buy into panic after losing a one-point game to Ray Lewis and the top-tier Ravens defense in Week 1. But, that doesn’t hide the fact that Sanchez has to improve, see the tape and show those corrections on the field this Sunday. The Patriots have a very young secondary and common logic says that the Jets will challenge them down the field.