At the midway point of the 2011 NFL season, let’s talk about the MVP award. Here are my top five (plus five more that just missed the cut) as we head into the Week 9 schedule. 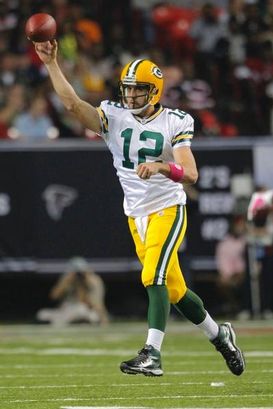 ICONIt was easy to make Green Bay's Aaron Rodgers my No.1 MVP candidate.

1. Aaron Rodgers, QB, Packers: The Green Bay QB has thrown 20 TD passes and only 3 INTs to lead the Packers to a 7-0 record, but look beyond the numbers with Rodgers. He is the playing the best football in the NFL. And when you break down this offense, I still can’t come up with a solid game pan to match the Packers' personnel and the skill set of Rodgers. Blitz-man, zone pressure, Cover 2, etc. Right now, Rodgers is beating every scheme you can throw at him.

2. Fred Jackson, RB, Bills: Take a step back and really look at Chan Gailey’s system in Buffalo, because Jackson is the key player in this offense. The RB has posted over 1,000 yards of total offense (721 rushing, 353 receiving) and has 6 TDs to go along with it. Jackson has shown top tier ability to cut back, exploit the second level of the defense and is a tough matchup for a SS/LB in the passing game. Take him out of that offense and we aren’t talking about the Bills as a first place team with a 5-2 record.

3. Calvin Jonson, WR, Lions: Why can’t we put a WR on the list? In my opinion, the Johnson is the most explosive weapon in the NFL and he forces you to adapt your defensive game plan. The fade route inside of the 10-yard line vs. press-man, the deep dig, the post, 7 (corner route) and double-move vs. Cover 2, etc. Johnson can run the entire route tree, beat man coverage and get on a safety’s cushion in the deep half. Through eight games, Johnson has 11 TDs and 47 receptions for 804 yards. However, the key stat from a defensive perspective: Johnson is averaging 17.1 yards per catch for the 6-2 Lions.

4. Tom Brady, QB, Patriots: Rodgers has better numbers this season, but if there is a QB I am going to pick to go win a game for me in the fourth quarter, it is still Brady. The Patriots’ QB has thrown 18 TDs and 8 INTs this season along with 2,361 yards. Maybe I do have him too far down my list, but the key with Brady remains the same: if you want to beat him, you better be near perfect from a pressure and coverage standpoint. That will never change.

5. Matt Forte, RB, Bears: How many wins do you give to the Bears without Forte in the lineup? One? Maybe two? The Chicago RB has accounted for almost 50% of the total offense in the Bears' playbook, can run the screen game and has consistently shown the ability to make defenders miss in the open field. 672 yards rushing and 419 yards receiving for the all-purpose back in Chicago. An ideal fit for what Mike Martz wants to see from the RB position--and the numbers are legit.