Now that we are at the mythical halfway point of the 2010 season, let’s start talking about the MVP race. What players are on my list as the top candidates to take home the award at the end of the year—and who is the overall front-runner?

Today, my top five candidates for the MVP award…plus five more that just missed the cut.

1. Philip Rivers, Chargers: It is an easy call for me to put Rivers at the top of the list—especially after the Chargers’ last two wins over Tennessee and Houston. The San Diego QB is making all of the throws in Norv Turner’s offense and doing it with limited talent outside of the numbers. Yes, Antonio Gates is the best player at the TE position in the NFL, but I don’t see another QB who has more control of his offense right now than Rivers. And his numbers are outstanding: 2,944-yards, 19 TDs and 8 INTs. If the Chargers can put their standard run together and get into the post season, Rivers may walk away with the MVP title. 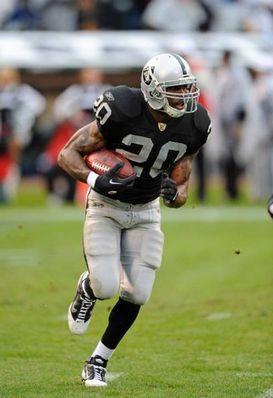 ICONMcFadden is producing like a legit No.1 back for the 5-4 Oakland Raiders.

2. Darren McFadden, Raiders: There might be some strong opinion on having the Raiders’ RB this high on the list, but when I look at the MVP award; I want to see how the player impacts that football team. Oakland is relevant again—and winning big football games—because McFadden looks and plays like a legit No.1 pro back. The former Top 5 pick is showing patience in the backfield, finishing runs and developing into that feature back that is more than just an edge runner with breakaway speed. 757-yards (over 5-yards per carry) and 4 TDs—in only seven games.

3. Clay Matthews, Packers: If Matthews doesn’t get consideration for the MVP award, then it is safe to say that he is without question the leader for the Defensive Player of the Year award at seasons end. But, why not talk about him as an MVP candidate? The Packers’ OLB is the ideal fit in any 3-4 scheme because he can use speed off of the edge and is a great technician. The numbers: 31 tackles, 10.5 sacks, 1 INT, 1 FF and a TD. Matthews is the he No.1 reason this Packers’ defense under Dom Capers is forcing turnovers.

4. Peyton Manning, Colts: Easy to have Manning on the list every single season. We have talked about the Indy offense before: basic personnel groupings and simple route concepts. But, no one does it better than Manning. Every Sunday we can see why he is labeled as one of the top students of the game because he works around defensive schemes—and always dictates the flow of the game. Plus, Manning is working with injuries across the lineup and still has the numbers to back it up: 2,478-yards, 16 TDs and only 4 INTs. If the Colts win the AFC South, Manning will likely be the top favorite of the masses.

5. Arian Foster, Texans: Breakout season for the Houston RB. Leads the league in rushing with 864-yards, 9 TDs and an average per carry of 5.5. MVP numbers when we talk about the RB position. Reminds me of Eddie George (and Eric Dickerson) when we look at styles. Runs tall, and is a long strider, but has the ability to cut and change direction. Foster is going to have the numbers, but the Texans’ season is going to decide whether or not he remains in the discussion. I’m not sold that Gary Kubiak has a playoff team down in Houston.

Check back to the NFP tomorrow for my Week 10 NFL tip sheet: pregame notes, personnel to watch, my top ten teams and picks for the entire slate of games.