MNF: Bears beat up the Cowboys

Let’s run through my notes from the Bears’ 34-18 win over the Cowboys down in Dallas. Some Xs and Os, personnel, etc. Here’s what I saw tonight… 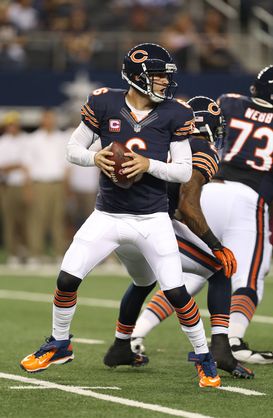 US PRESSWIRECutler targeted Marshall on inside breaking cuts in the Bears' Monday night win.

Cutler to Marshall: The Bears used the Slant, the Spot (7-Curl-Flat combo), Swap Boot, etc. to get the ball to Marshall (7-138-1TD), giving him open field to work with. Think leverage here with the Bears' WR. Routes breaking inside of the numbers (Smash route on the TD) where his size/length come into to play. The 9 (fade) route in the 4th quarter? That’s a veteran push-off from Marshall that will never be called. And this is exactly what QB Jay Cutler (18-24-275-2TDs) wants—a WR that will go get the ball.

Bears’ Cover 2: Look at the turnovers Lovie Smith’s unit produced vs. Tony Romo in their two-deep shell. Get after the QB with your front-four and drop seven into coverage. Nothing new from the Bears. Let’s talk about two (of the five) interceptions Romo threw...

- On D.J. Moore’s pick, this is how you play the “seam-hook” vs. an inside vertical seam. Get depth, carry No.2 and read the QB. Easy play for the Bears’ nickel back to roll under the route and step into the throwing lane.

- On Major Wright’s pick, he has to play two verticals. The CB will sink with No.1 (and cushion the safety), but this is Wright’s play to make. Align at 15-18 yards off the ball and put yourself in a position to drive at a downhill angle vs. both vertical concepts. Great break off the numbers.

Dez Bryant’s drops: That was undisciplined football from the Cowboys’ WR all night. Start with the missed “hot read” vs. Chicago’s open (weak) side zone pressure. In that situation, the WR has to convert to a Slant, Hitch or Fade based on the QB. Bryant runs the wrong route and it leads to a “basket” INT (and score) for Charles Tillman. Now move on to the dropped balls. Those are plays you have to get from your WR. Finish. Move the sticks. Protect your QB....Bad football from Bryant.

Hester’s TD: I’m calling this a “Dino” route from the Bears’ WR on the 34-yard TD. Stem up the field, shake to the out and then work vertically to the post. With rookie Morris Claiborne playing with an outside shade (and looking in the backfield) he had no chance to recover on this route. Where was the FS? Looked like a “cut” call on the backside vs. a WR in a reduced split (close to the formation). Solid execution from both Hester and Cutler on the play.

Cowboys' lack of production in the run game: Dallas only generated 41-yards on the ground. And we have to understand that the Bears played a 7-Man box (Cover 2) for the majority of the game. When a defense wants to keep both safeties removed from the run front, you have to establish the line of scrimmage and force the SS to walk down (Cover 1, Cover 3). That needs to improve when you have DeMarco Murray in the backfield.