Here are some quick game notes after watching the Texans move to 5-0 on the season with a 23-16 win over the Jets in New York—starting with Arian Foster and J.J. Watt. 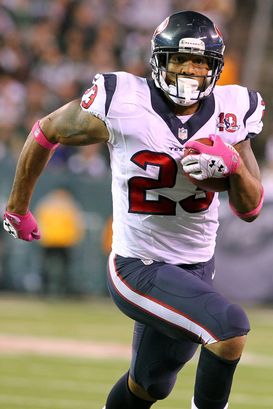 US PRESSWIREArian Foster carried the ball 29 times for 152-yards and a TD in the Texans' win over the Jets.

Foster’s production: Look at the final numbers: 29 carries, 152-yards and a TD. In the Texans’ playbook you will see the Counter OF, Power O and Lead out of their 2-Back looks with the Stretch and Stretch “GT” (pull the front side Guard and Tackle) when Foster is aligned in the “dot.” And off this run action, the boot (and “Swap” boot) come into play for QB Matt Schaub. The Texans didn’t generate the big plays down the field to WR Andre Johnson when he was matched up vs. CB Antonio Cromartie and they scaled back the call sheet in the fourth quarter. However, when you have a back with Foster’s vision and power vs. a D-Line you can move off the ball, its easy to lean on the run game.

Jets’ “gadget” offense: I’m not making excuses for QB Mark Sanchez. We all know he has to play better football for this club. However, look at all of the “gadget” plays New York wants to run. I have no problem with getting creative, but when you put yourself consistently in adverse situations with these trick plays, you can’t expect Sanchez to come back in the game, make throws and rescue the offense. That’s not smart football. Especially when you are down six in the fourth quarter. Give the ball to your starting QB and let him run the offense.

J.J. Watt continues to own the NFL: When you watch the Texans’ DE play, its easy to be impressed with his athletic ability, speed up the field and his power at the point of attack. That’s legit talent right there. But let’s not forget about the technique Watt displays with his hands. He can “press” an offensive lineman and create some separation to work his counter moves. Fast and violent with the hands. That’s what I took from the game.

The “block” on Cushing: O-Lineman are going to cut. No different than a WR going after a safety down the field. As a defensive player, you do drills throughout camp and in regular season practices to get your hands down and defeat the cut block (extend your arms, press down on the shoulder pads and get the blocker off your legs). However, you can’t defend yourself vs. a cut-block that comes in late on the side of your knee (and even possibly behind the knee). That’s what I saw from Jets’ guard Matt Slauson who took out Cushing when the LB was trailing the play. And that would be a major loss for Houston if Cushing is out for an extended period of time with a serious injury.