Regular season prep begins today around the league, but let's take some time to look at some final notes from training camp and the 2010 preseason in the NFC North. 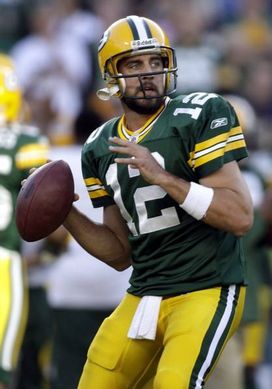 - What impressed me most about Packers QB Aaron Rodgers was his placement of the football. Sounds simple, and looks simple on TV, but to be able to consistently throw the back shoulder fade, the inside vertical seam and the “7” (or flag) route away from a defender’s leverage wins. Defensive backs will turn on the film and listen to their position coach say, “Great throw, great catch….nothing you can do.” That is the sign of a mature, polished passer in this league.

- TE Jermichael Finley is going to stretch the field for this Packers offense and he will be a major issue for opposing defenses in the red zone. A TE who can use speed, athletic ability and his size — where he can essentiality “box” out defenders in the end zone. A tough matchup and I am very curious to see how teams will game plan this offense when Finley is consistently removed from the formation as another WR.

- Rookie Morgan Burnett is going to start at FS. What we saw in the preseason was a young player who has ball skills and very good range from the middle of the field. However, I have spoken to pro scouts who are questioning his ability to tackle in the open field, and we have to remember that he is still a rookie. Burnett will make mistakes early as he gets used to the speed of the game in the regular season.

- Chris Harris is playing out of position at free safety. In my opinion, he is the ideal player for Lovie Smith’s system to play in the run front when Chicago uses its Cover 1, Cover 3 and any single high safety defenses. Can take on lead blocks, tackle close to the line of scrimmage and set the edge in the run game. He looks out of place in the middle of the field and can take poor angles to the football. The Bears organization is high on Harris, but they need to get rookie safety Major Wright back on the field. Harris belongs in the box. 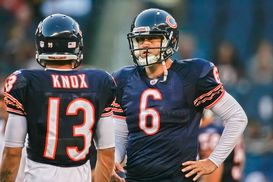 ICONCutler has a No.1 WR in Johnny Knox.

- Johnny Knox is a legitimate No. 1 WR. He can create separation on any inside breaking route in Mike Martz’s offense, is smooth in his cuts and can use his speed to press the cushion of the CB — where he can take his route up the field or break off on the out, the comeback and the “7” route. Knox can run the entire route tree.

- Jay Cutler was not good enough in the time he saw during the preseason. He forced the ball in certain situations and looked uncomfortable in the pocket. I do see Cutler being able to move the ball and put points on the board in this scheme, but he has to learn to take the check down and live for another play — especially with an O-Line that is not playing great football. You want your QBs to challenge defensive backs, but you don’t want to put the defense in a tough spot by giving away field position.

- No way around it, the loss of WR Sidney Rice hurts. But, with Favre, is anyone going to question whether or not he is still going to sling the football around? You and I could line up at WR, and he would still try and stretch the defense. But, someone on that roster has to step up and produce for this offense outside of the numbers. Bernard Berrian? Greg Camarillo? Favre needs a new No. 1 to work with. 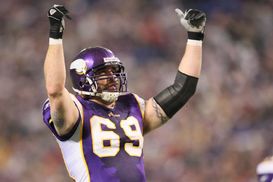 - Defensive coordinator Leslie Frazier’s best asset is his front four. Until someone can block Jared Allen and the rest of the Minnesota D-Line, Frazier will continue to play coverage over pressure in a secondary that has some question marks at the CB position. That has won in the past for the Vikings.

- Who is going to be the third-down back for the Vikings? Between rookie Toby Gerhart and former Hawkeye Albert Young, there has to be a solution. Gerhart is a straight downhill player who isn’t going to make many defenders miss at this level, which would give the nod to Young in my opinion. But, if all else fails, we could see expanded reps for Adrian Peterson — and that wears down RBs.

- The Lions move to trade up into the back end of the first round and grab Jhavid Best might be the one of the top moves of the draft. He is explosive, can catch the ball and will be an instant weapon for this offense. Interested to see how Best is used in Chicago next Sunday when the Lions open the season at Soldier Field. Lots of creative ability with the rookie RB from a game plan perspective. 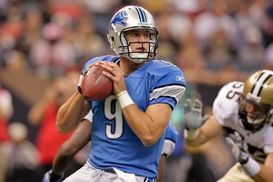 ICONPlenty of positive talk around the league on Lions QB Matthew Stafford.

- I talked to multiple defensive coaches recently who see a big year coming for QB Matthew Stafford. This is an offense that is going to score points and with the additions of TE Tony Scheffler and WR Nate Burleson, Stafford will have more options to go with WR Calvin Johnson — a player who I see as the best deep threat in the league outside of Randy Moss.

- The problem in Detroit: can they stop anyone on defense? That is what I am hearing from pro scouts. I like the front four and am anxious to see rookie DT Ndamukong Suh play in the regular season, but that secondary looks soft. Expect opposing offenses to test the Lions CBs down the field on a regular basis.