As we look ahead to the Divisional Playoffs this weekend, let’s breakdown personnel, matchups plus some Xs and Os. Here are five things I am looking for—starting with Alex Smith’s production vs. the Saints.

1. Alex Smith’s production: The 49ers’ QB doesn’t have to match Drew Brees in the box score, however he does have to make the throws in crucial situations (3rd downs, red zone, etc.). The Saints will bring a game plan that has multiple pressure packages, but they will also play coverage in the secondary—rushing three and dropping eight. There will be opportunities for Smith to work TE Vernon Davis between the numbers, target Michael Crabtree with deep play action and test the Saints’ safeties in their Cover 2 scheme. I would expect a call sheet that leads with Frank Gore and the off-tackle run game, but don’t let that discount the plays Smith has to make from the pocket. 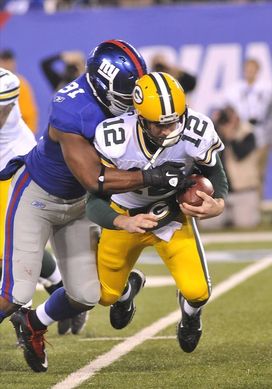 ICONTuck and the Giants' D-Line could force the Packers to alter their protection schemes.

2. Giants’ front four pressure: I’m looking at protection schemes from the perspective of the Packers. Will we see Green Bay keep in added protection (six, seven-man schemes) to handle Tuck, Pierre-Paul, Umenyiora, etc. or do they spread the field, use empty alignments and get the ball out? There has been plenty of talk this week from a coverage aspect when breaking down this Giants defense vs. QB Aaron Rodgers. Play 2-Man, Cover 2, blitz-man? The key here (regardless of the coverage call) the the Giants’ front can getting to Rodgers consistently, moving him off the spot and forcing the QB to come off of his primary read. The pass rush has to get home on Sunday at Lambeau.

3. Belichick vs. Tebow: Think adjustments—on both sides of the ball. Second meeting of the season for the Broncos and Pats that will lead to new game plans, tendencies and install. Look for Broncos’ offensive coordinator Mike McCoy to build on his playbook from the win over the Steelers in the Wild Card round, add in more movement passes (boot, sprint, etc.) and create specific schemes that allow Tebow to produce. The challenge for Belichick is to give Tebow new looks, take away inside breaking routes and prevent the vertical game (Fade route, double-move) that sent the Steelers home for the offseason. If you like Xs and Os, this is the matchup to watch over the weekend.

4. More Ray Rice: Give the ball to the feature back and let him go to work. QB Joe Flacco will have opportunities to throw the ball, but I see a game plan that needs to start (and end) with Rice this Sunday vs. the Texans. Create play action, work inside of the defensive front and win the field position battle. If you want to throw the deep ball to Torrey Smith and get the one-on-one matchups outside of the numbers, then establish control of the line of scrimmage with Rice. Stick to the game plan if you are Ravens' OC Cam Cameron: run the ball, use the play pass and taken advantage of the field position your defense can provide to advance to the AFC Championship.

5. Eli’s big play WRs: With Hakeem Nicks, Victor Cruz and Mario Manningham, the Giants’ QB has three targets that can get down the field and produce vs. a Green Bay secondary that has given up some plays. Think about the top of the vertical route tree vs. Cover 1 with a single-high safety look. Manning is excellent at moving the free safety and then getting the ball outside of the numbers. To keep pace with Rodgers and the Packers, Manning will have to take some vertical shots and test the top of this defense.