Click here to see a breakdown of Fleener vs. Notre Dame.

When looking at prospects on the offensive side of the ball I think scheme and field position. Create favorable matchups and use specific route concepts to win based on pre-snap alignment.

With Stanford’s Coby Fleener—the No.1 TE on the NFP Big Board—I focus on the red zone and inside breaking concepts. To illustrate this, I went to the chalkboard to draw up three route schemes: the backside slant, Pin and the TE “shake” (or “nod.”). Bring Ace personnel (2 WR, 2 TE, 1 RB) on the field and align Fleener as the “move TE” (or the U). 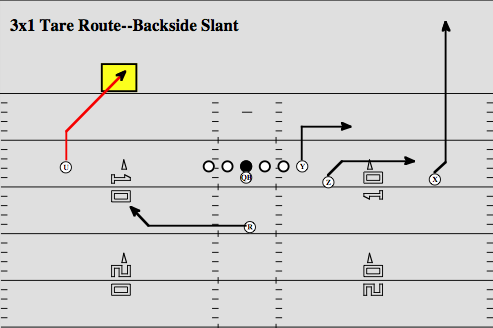 - Backside of a 3x1 set in the NFL (regardless of field position) is a high alert for a slant route (T.O. made his money on this route in Philly). To the closed (strong) side of the formation, the offense is using the Tare concept (Flat-Option-9).

- With Fleener (highlighted in red) removed from the core of the formation he will draw the matchup of a LB or SS (and possibly a CB) in Cover 1. An inside breaking concept (slant) that is based on leverage. With Fleener's size, he can win on the release and shield the defender from the ball.

- Simple throw, simple read for the QB. Even vs. Cover 2 or Cover 4 (quarters), this is a 3-step route that we see across the NFL inside of the 10-yard line. And when you align players out of position it is done for one reason: to create a matchup you can win. 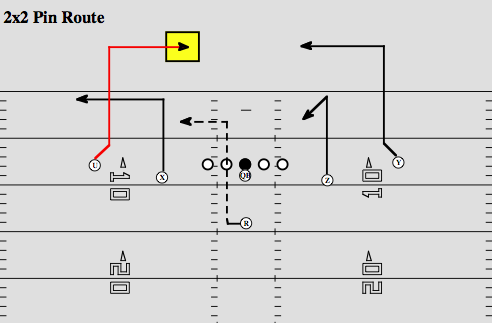 - The Pin is similar to the Hi-Lo routes we see in west coast systems. The Dig (square-in) with an underneath curl (or option) route. Key vs. zone based defenses in the red zone to hold the underneath defenders and create throwing lanes to target the dig breaking back to the middle of the field.

- Drawn up in a 2x2 “Orange” look (Patriots offensive formation) with both TEs (Y, U) removed as the No.1 receivers to the closed and open side. Inside release, vertical stem up the numbers and then an inside cut.

- With both slot receivers (X, Z) breaking underneath the dig routes, this gives Fleener the opportunity to work back to the inside. If the defense is showing Cover 4, draw the safety up on the option route and break back to the middle vs. a CB playing outside leverage. The same can be said for Cover 1 and vs. a deep half safety in Cover 2.

- The Shake (or “nod”) is a simple double move run inside of the numbers. Again, I have Fleener removed from the core of the formation in a “doubles” look.

- Vertical release, use the out cut and then break back up the field. This is a tough route for a safety in man-coverage and can be a nightmare for a Cover 2 Mike Backer that settles his feet.

- Think both zone and man here. You would like to get Fleener matched up in Cover 1, but the Shake route will also create holes in zone schemes.