Playing Cover 2 (or Tampa 2) at the safety position is all about reading releases and stems of the WR. Drop to your landmark, play with depth and drive downhill on the throw. And as we continue to work towards the NFL Draft, I want to look at two routes (fade, corner) that every safety prospect will have to defend in deep half if they want to see valuable minutes on Sundays.

Here are the concepts (Flat-7, 4 Verticals) drawn up on the chalkboard with Posse personnel (3 WR, 1 TE, 1 RB) on the field vs. Nickel Cover 2. Let’s break them down and get into come coaching points. 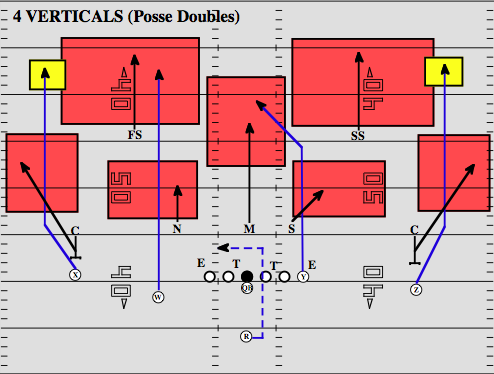 - Put stress on the top of the defense with four vertical concepts and test the discipline of the deep half safety. Can be run from a 3x1 alignment (called “999”) or from a base 2x2 formation.

- CBs are taught to force an inside release in Cover 2 (allows safety to stay on top of his landmark). Here, we see outside release from the No.1 WRs (X,Z). Widen the safety and open up the two inside verticals (W,Y). And that creates a two-on-one matchup vs. the Mike Backer.

- Why is the release of No.1 key? Only two routes a WR can run with that release outside of the numbers: 9 (fade) and comeback. That’s it. And if he doesn’t break between a depth of 12-15 yards, play the fade. Again, allow the release to tell you what the receiver is running. No different than Mario Manningham's route (and release) vs. the Patriots' Cover 2 in the Super Bowl.

- Tough spot for a safety, but you have to stay square (on your landmark) and get depth. Don’t jump inside. NFL QBs will turn this into an explosive play if the safety opens his hips or commits before the throw. Play with some patience, stay in your pedal and break only on the ball. That will allow you to play both verticals and drive at a downhill angle. 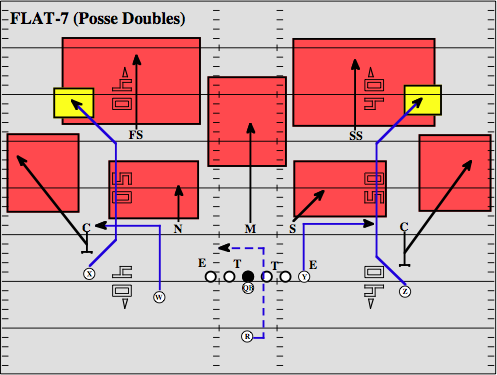 - The top Cover 2 beater in the NFL. Offenses want to create a one-on-one matchup vs. the safety at the top of the route stem by forcing the CB to sit (or squat) on the flat route.

- Look at the release and stem of the WR. A hard inside release and then a vertical stem up the numbers. That tells you to play for three routes: 7 (corner), 8 (post) and 6 (Dig). Forget about the 9 route with that release and stem. And just like I said above, the route will break at a depth of 12-15 yards.

- You need some help (or cushion) from the CB underneath to make a play on the 7 route. With the inside release, the CB is taught to sink at a 45-degree angle (zone technique) and react to the ball in the flat. This will force the QB to throw over the top of the CB when he targets the 7. And that buys you some time to drive on the route.

- Play the break at the top of the route stem. You have protection underneath from the CB, help on the 8 (post) from the Mike Backer, and the Dig isn’t the safety’s play to make in Cover 2. Take an angle that puts you on the upfield shoulder of the WR and play the ball. - Don’t guess—because that will get you in trouble. You might get away with it (once), but when those offensive coaches up in the box see you jump a route in Cover 2, they will dial up a double-move (corner-post) on the next series. And if you guess the 7route when the WR is breaking back to the post, it is time to strike up the band and play the fight song.