NFL Draft: How to grade the safety position

There is some talent in this year’s safety class with 'Bama's Mark Barron, Okie State's Markelle Martin, LSU’s Brandon Taylor, Boise State’s George Iloka and Notre Dame’s Harrison Smith. However, what are you looking for when you turn on the tape to grade prospects at the position?

Today, let's look at five keys I use when breaking down the safety position leading up to the NFL Draft... 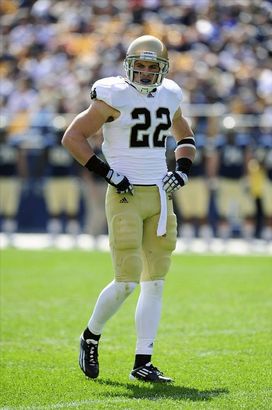 1. Playmaking ability: Are they around the football and do they finish when they break on a route? You want to draft safeties that will make impact plays in the NFL and I begin to question prospects that don’t show up when the ball is in the air. Ask any NFL GM and they will tell you the same thing: they want playmakers in the secondary. That’s what you are paying for. Coaches can teach tackling technique. However, if the prospect doesn’t make any big plays, be careful how high you grade them.

2. Range: Look past the 40-times that come out of the combine. I don’t care if a prospect runs in the mid 4.5s, because that doesn’t impact his ability to break from the middle of the field and get outside of the numbers if they can read the QB in the pocket. Don’t look at top end speed as a true judge of a safety’s ability. That doesn’t add up to production if they can’t get out of the middle of the field or break off of the top of the numbers in Cover 2. The top safeties in this league can break on the throw and find the football at the point of attack—regardless of what the stop watch says.

3. Coverage skills: Gone are the days of the “in the box” safety that earns his paycheck in the run game. In today’s league, defensive coordinators want the ability to keep their base defense on the field vs. three wide receiver looks. And to do that, you need a safety that can walk down over the slot. Plus, think of the TE position and Jimmy Graham, Vernon Davis, Rob Gronkowski, Jason Witten, Tony Gonzalez, etc. These players are working the middle of the field and producing inside of the 20-yard line. Can the prospects play off-man, use their hands in a press alignment and mirror a release to maintain leverage? Good questions to ask when you grade the prospect’s skill set in man-coverage situations.

4. Football IQ: I don’t need to interview a prospect to find out if understands the game, because the tape will tell you. Can he jump routes knowing he has help to the inside or over the top? Does he play the technique of the defense called in the huddle? Will the prospect take the proper angle to the ball depending on the split, release and stem of a WR in the route scheme? Plus, where are his eyes? Studying a prospect’s ability to read his run-pass keys is crucial. You can begin to understand how well these prospects know the game by turning on the tape if you look for the right things.

5. Toughness: You can’t play soft and survive in the secondary in the NFL. In your tape study, see if the prospect will attack the “C” gap from a Cover 4 (quarters) alignment, “spill” (inside shoulder) vs. a pulling guard in the run front and deliver violent contact (plus power) when they finish off ball carriers. I want safeties that are a little nasty and aren’t afraid to come downhill on a receiver or a ball carrier. There is no reason a safety should allow a WR to block them in the open field or get swallowed up in the run front. And when they blitz, do they display a physical style of football in getting to the QB? They will have to play hurt and banged up in the NFL, so don’t forget to grade these safeties on “toughness.” It does matter.

Up next: grading the CB position