NFL Draft: How to grade the WR position

Previously at the NFP, I broke down my notes on grading out the CB and safety positions heading into the NFL Draft. A guide for what to look for in your own tape study. Today, let’s move over to the offensive side of the ball and talk wide receivers. Here are five keys to keep in mind when you turn on the game tape… 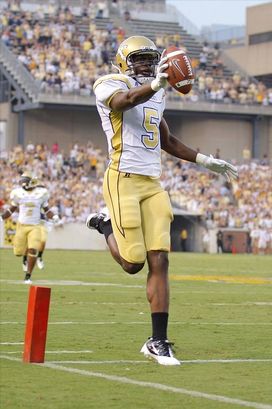 1. Vertical (separation) speed: Every NFL club wants to get a stopwatch speed on WR prospects, but does it apply to the tape? Look to see if the WR can stack on top of a DB, win down the field and test the top of the secondary. Can they eat up the cushion (distance between WR and DB) in off-man coverage, force the DB to open his hips and then separate when the ball is in the air? Speed sells, and while the 40 is a tool in the grading process at the WR position, the tape will tell you if a prospect has “game speed.” And if the prospect can’t separate at the college level, it will be a tough transition vs. the size and speed of NFL DBs.

2. Body control and hands: A couple of keys to look at here. Can the WR adjust to the ball? Think of the 9 (fade) outside of the numbers or a ball thrown to the back shoulder away from a defender’s leverage. And do they catch the ball outside of their frame? Sounds simple, but you can grade out a prospect on their ability to “track” the ball down the field and to finish the play with a clean catch. You want receivers that go up and get the football at the highest point, use their athletic ability to shield defenders and make plays after in the open field.

3. Ability vs. press-coverage: These WRs work vs. plenty of soft zone looks at the college level in their spread systems. Because of that, you might not get a chance to see the top prospects matched up vs. a true press-coverage alignment. To make up for this, study their lateral movement (short area quickness) and the power in their hands. On Sundays, these WRs will be asked to beat press-coverage, use their hands at the point of attack and then get into the route stem. In the NFL (especially vs. pressure schemes), you must win at the line of scrimmage. And many rookie WRs struggle because of their lack of experience vs. press-looks.

4. Route running: This is down the list because often the top prospects (and best athletes) can get away with rounding their cuts and sloppy footwork at the top of the stem. Do they chop their feet on inside breaking concepts or do they run through their cuts? Is there a “burst” when they come out of their cuts or are they slow, lazy working back to the middle of the field? Again, most receivers develop their route running skills when they work under pro coaching. But in your own tape study, look at the top of the route stem. You want to see clean breaks and solid footwork coming back to the ball. This is where a receiver can create some separation and gain leverage on a DB.

5. Toughness: You want to draft prospects that will block in the run game, crack inside on a SS (think of the crack toss), produce after the catch (break tackles) and take a hit in the middle of the field. These rookies will get hit in the NFL and when they are asked to block on the second level of the defense, the last thing you want to see is a soft attempt to “cut ” a DB. And while we discussed key skills above, if they aren’t tough (and shy away from contact), you won’t get much in return. They are wearing pads—make sure they use them.

Want to learn how to study the NFL Draft? Click here to signup for the NFP’s online scouting class.