During your own tape study leading up the draft, there are three routes you should focus on at the WR position: the 7 (corner), Dig (square-in) and slant. Base concepts that every rookie wide out must convert if they want to get on the field in the NFL. Today, let’s go to the chalkboard, discuss some coaching points and breakdown why these three routes are key at the pro level. 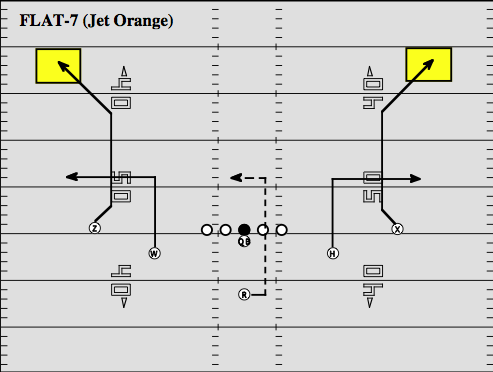 - Drawn up in the Flat-7 combination using a 2x2 “Orange” (spread) alignment.

- With a pre-snap slit outside of the numbers (X,Z), the No.1 WR will take a hard inside release (need to create room for the 7 cut). A vertical stem with the break coming between 12-15 yards (break point for every route outside of the 3-step game).

- WRs also have to convert this route from an inside alignment (No.2) or from a bunch/stack.

- Think of Cover 2. The No.1 route to beat the 2-deep look is the 7 cut. Force the CB to sit (or squat) on the Flat (or Smash) and create a one-on-one matchup at the top of the stem vs. the deep half safety. Plus, once you sell the route on tape, the double-move comes into play (corner-post). 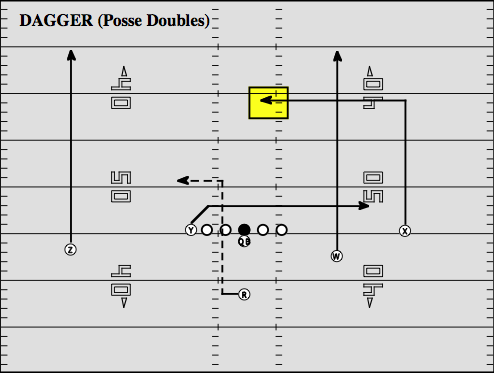 - Drawn up in the Dagger combination (9-Dig) out of a 2x2 “Doubles” alignment. However, you will see the route run in multiple combinations (think "Pin" route vs. Cover 1 or Cover 4).

- The break of this route is around 15-yards (Mike Martz would increase it to 17-yards). Straight vertical stem (can take an inside release to set up the cut) and then break back to the middle of the field.

- A top route concept vs. Cover 2 (find the hole over the Sam/Nickel and in front of the safety) and vs. any man/zone coverage with the CB playing outside leverage (Cover 1, Cover 3, Cover 4). - Need a clean cut back to the middle of the field. To convert the Dig, the WR must create enough separation on his initial break at the top of the stem to take advantage of a CB playing with outside leverage. 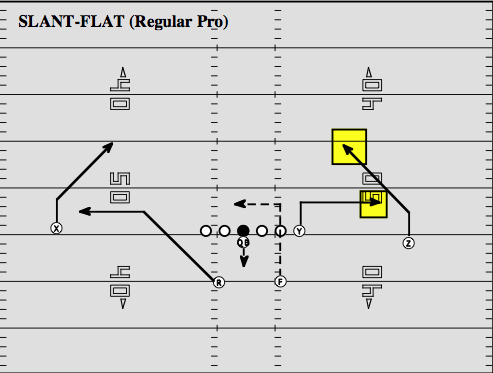 - Drawn up in base Regular personnel with a Pro alignment (split backs).

- Can be run with the 3-step drop or thrown “hot” vs. pressure (converts to a one-step release).

- Think 3rd downs and inside of the 5-yard line. Two game situations where the slant route becomes a top concept. This isn’t complex football here, but the execution is key. Win at the line (get off of press-coverage), create leverage and finish the play. Another reason why NFL clubs are looking for size/speed prospects outside of the numbers.

- Yes, this is a route we see on Friday nights in high school ball. However, if you can’t run the slant at the pro level (and win at the line), you won’t play. And with the amount of pressure NFL offenses see on Sundays, this is a crucial concept to every playbook.