NFL playoffs: Are you ready to see some speed?

“Hey rook, the playoffs are no joke.”

I heard that all week leading up to my first playoff game as a rookie back in the 2000 season with the Rams. One week after beating the Saints on Christmas Eve to get in the tournament, we would do it all over again. Get on the plane, fly down to New Orleans the next weekend and repeat the drill. 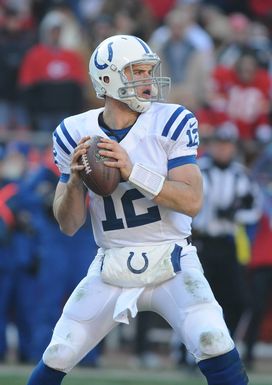 US PRESSWIRERookie Andrew Luck will make his first playoff start this Sunday vs. the Ravens.

I thought the vets were full of it to be honest. I did. How could the league possible get faster in a week’s time? Come on. I wasn’t buying it. It’s still football.

Man, I was dead wrong.

The hitting, the speed, and the tempo of the game lived up to everything the vets told me throughout the week.

I had experienced the jump in speed from the preseason to the regular season. That’s shocking when you get on the field as a rookie vs. veterans that get paid big money to play this game for a living.

Speed in the college game? Sure. But it doesn’t compare to this.

It took me some time to get adjusted.

But this game down in New Orleans on Wild Card weekend was even faster.

Special teams? No time to think. Guys were running for their lives covering kicks, exploding into the wedge (when it still existed in the NFL) and sacrificing their bodies to make a tackle inside of the 20-yard line.

So, why does the speed increase so much?

Think about what these guys are playing for. We are talking about a chance to land a Super Bowl ring and collect more playoff checks. That’s cash on top of what you made during the season. And the more games you win, the more exposure you get as a player on the biggest stage in America.

You make a play in the post-season and everyone sees it. That’s the truth. For many young players a post-season run can jump start a career and give you options moving forward.

Next weekend, we will get to see Peyton Manning and Tom Brady play. On Saturday night, it will be Aaron Rodgers. Those QBs have been through this drill multiple times and have rings to show for it.

But what about the rookie QBs that are slated to play this weekend? Think of Andrew Luck, Russell Wilson and Robert Griffin III. And let’s not forget about Christian Ponder and Colin Kaepernick in their first post-season start over the next two weeks.

That’s great theater. I want to see these young QBs handle the stress of the playoff stage. And everything is a test.

My advice to the rooks? Listen to the veterans when they talk about the speed of the game in the post-season. It could shock you a bit. However, with rings, money and jobs on the line, what would you expect?