After watching the Ravens and 49ers advance to Championship weekend, here are my notes from Saturday’s matchups in the Divisional Playoffs. 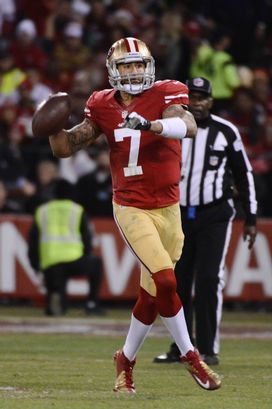 US PRESSWIREKaepernick's skill set was on display in the 49ers' 45-31 win over the Packers.

Kaepernick lights up the Packers: The combination of the 49ers’ playbook and Kaepernick’s skill set at the quarterback position absolutely gashed the Packers’ defense. Look at the multiple personnel groupings, formations, alignments and schemes. Kaepernick’s ability to run the ball off the Read Option should be talked about (along with his top end speed in the open field), but let’s also focus on the throws he made from the pocket (deep seam, 7 route, skinny post, etc.). Easy to be impressed with the overall ability we saw from the Kaepernick tonight. That was a clinic. And the QB had the numbers to prove it (17-31-263-2TDs-1INT; 16 carries, 181-yards, 2TDs).

Broncos’ Moore gives up the deep ball: Can’t let this happen in a two-minute situation with an opportunity to close out a playoff game. In Cover 2 (smart call), the safety has to play with enough depth to take away the outside vertical. With Jacoby Jones releasing down the field (CB will trail underneath with no threat in the flat), Moore should have opened his hips vs. a single vertical and taken an angle that put him over the top of No.1. However, he was late coming out of pedal (need to transition sooner), took a poor angle and wasn’t in the proper position to make a play on the ball. Know the game situation; increase your pre-snap depth if you have to and don’t allow anything over the top. That’s poor technique on a throw that should have been intercepted to close that game out.

Manning’s INT: We all know Manning shouldn’t have thrown that ball in the second OT. With Brandon Stokley trying to convert his route, Manning threw back across his body. Sure, there are QBs that get away with it, but it’s a risk anytime you make that decision. I don’t want to take away from Corey Graham and the play he made, but a veteran QB with that much experience has to throw that ball away or look at another option. Crucial mistake that set up the Ravens to kick the game winning FG.

Capers’ game plan: There is no question the edge defenders (OLBs) in the Packers’ defense had issues with the Read Option, but I’m looking at Capers’ decision to bring pressure vs. Kaepernick in the first half on 3rd down situations. That’s tough when you don’t get home on the blitz, because DBs have their backs to the QB in coverage. How many times did we see the 49ers’ QB break contain or step up with plenty of open field to work with? In that situation, go with Cover 2 or even Cover 3. Keep it simple. Rush four and allow your second level defenders to drop to a landmark and read the QB. That was a rough night for Capers and his game plan.

Torrey Smith vs. Champ Bailey: The Ravens’ WR worked over Bailey in the first half. Look at the vertical speed (plus the ability to create separation) on the post or the body control to come back for the ball on the 9 (fade) route in the red zone. I know Bailey didn’t have safety help on the post, but that’s on him to play through the break, drive to the up field shoulder and stick to the hip vs. Smith down the field. Champ couldn’t match the speed or route running ability of Smith on Saturday.

- You think Joe Flacco made some money today? The Ravens’ QB threw for 331-yards and 3 TDs.

- Michael Crabtree: route running and a burst after the catch. That’s obvious when you watch him play right now.

- John Fox should have to explain the decision to take a knee at the end of regulation with two timeouts left. Give Manning a shot to win the game.

- Where was the deep ball from Manning and the Broncos’ offense? Think of the defensive scheme from the Ravens. When they didn’t bring pressure, Baltimore played a lot of 2-Man. Underneath trail-man with safety help on top of the numbers.