Click here for my notes from Saturday’s matchups in the Divisional Playoffs.

With the Falcons and Patriots now advancing to Championship weekend, here are my quick game notes from Sunday’s Divisional matchups. Five things that stood out from my perspective… 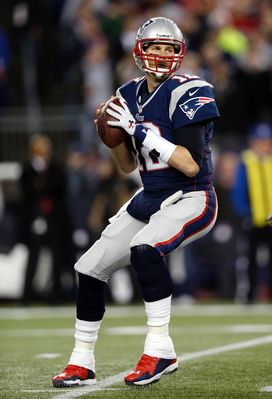 US PRESSWIREBrady threw three TD passes as the Patriots advanced to the AFC Championship.

1. Patriots win with tempo, matchups: Look at the consistent matchups Tom Brady and the New England offense created today. Even without Rob Gronkowski (expected to miss the rest of the playoffs with an injury according to a PFT report), the Patriots used multiple personnel groupings and alignments to win on the edge and between the numbers. Hernandez, Welker, Vereen. Houston couldn’t play with the speed and tempo of this offense and was exposed when Brady (344-yards, 3 TDs) targeted the middle of the field or worked the boundary in the vertical game. The way I see it, you almost need a couple of built in checks (think base defensive schemes) to compete with the pace of the Patriots. There were times when the Texans couldn’t get lined up in the red zone—and you don’t get those snaps back.

2. Ryan, Falcons’ 2-Minute offense: Seattle challenged the Falcons’ QB in the final thirty seconds of the game by using five-man zone pressure schemes (3-deep, 3-under in the secondary). How did Ryan respond? The QB hit Harry Douglas on the deep out and then targeted Tony Gonzalez on the inside curl (excellent blitz pickup by RB Jacquizz Rodgers) to set up the game winning FG. No matter what your opinion was of the QB throughout the game (or after the pick he threw to Earl Thomas), give Ryan (24-35-250-3TDs-2INT) the credit for making the throws in a crucial situation to put his team in a position to win the ball game and advance to the NFC Championship.

3. Russell Wilson: The QB's ability to throw the deep outside cuts to the sidelines (3-level schemes) and extend plays in the pocket continues to impress me. Sure, Seattle did show some Read Option looks, but this playbook was productive today because of Wilson and the passing game. The rookie plays with the poise of an experienced vet and he doesn’t panic vs. pressure. Work the pocket, keep the eyes down the field and make plays. That’s what Wilson (24-36-385-2TDs-1INT) did as he brought Seattle back from a 20-0 hole at the half. Excited to see him play next year as he continues to develop as a pro.

4. Pressuring Schaub: When the Patriots had the Texans’ QB in 3rd down and 7-plus, they went with pressure (both zone and man). In man-pressure schemes, align your DBs off the ball, drive the 3-step reads, make the tackle and get off the field. Don’t’ make it complicated when you know the ball is going to come out. And going back to Schaub’s INT, the Patriots again brought pressure (off the edge) with LB Rob Ninkovich dropping as a “middle hook” defender to make the play vs. the inside sight adjust. That’s smart football from a defensive perspective.

5. Seattle’s missed opportunities: Start with the 4th and 1 call in the second quarter. That’s a situation where you use the boot action with Wilson or let Marshawn Lynch run off tackle (Power O, Lead, etc.). However, running the base FB belly (dive) isn’t going to get it done. I have no issue playing for the sticks there (over taking the FG), but you have to put the ball in the hands of one of your playmakers. And then there was the end of the half with the lack of execution and the clock issues that took points off the board. Can’t come up empty in those situations on the road in the playoffs.