NFL Preseason Week 3: What to watch

The third week of the preseason is viewed as final "dress rehearsal" for the vets and another opportunity for rookies to stand out on tape. With a full schedule set to kickoff tonight, here's what I'm looking for over the weekend.

Game Plans: This isn’t as detailed of a game plan as you will see during the regular season. However, for the first time this month players will study some film, get in some scout team work and set a play script for this weekend’s games. That leads to an expanded playbook, schemes and matchups. As close as you can get to “real” football in August. And for the starters, the last two or three quarters of “live” work until the games counts. 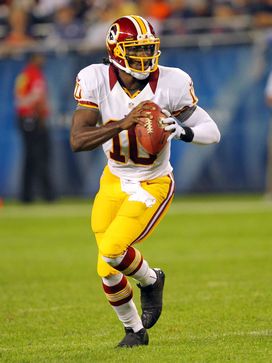 US PRESSWIREHow will the Redskins game plan with RGIII this weekend vs. the Colts?

RGIII vs. Indy: What will the Redskins and QB Robert Griffin III show on Saturday vs. the Colts? I was surprised to see the ‘Skins lean on their Heavy personnel (1WR-3TE-1RB) this past weekend early in the game vs. the Bears. Sure, you can run the boot game, outside zone, etc. with three TE personnel on the field. However, will Washington use some spread looks, throw the ball down the field and cater more to Griffin’s skill set when they dedicate some prep time to Indy?

Jets’ offense: Put some drive together. Produce points. Execute the offense. This Jets’ team has struggled offensively with both Mark Sanchez and Tim Tebow at QB. Preseason or not, running the base install in live game situations with some success is a part of developing an offense. Rex Ryan’s club needs to show some progress vs. the Panthers on Sunday night.

Morris Claiborne vs. the Rams: The CB saw his first action of the preseason last weekend against the Chargers, but he still needs a lot of work. If I’m Cowboys defensive coordinator Rob Ryan, I hope Rams’ QB Sam Bradford targets the rookie all night. If Dallas wants to roll into opening night vs. the Giants and rely on their pressure scheme, Claiborne has to be game ready.

Cedric Benson: More than anything, I just want to see Benson run in the Packers' system, hit the hole, work to the second level of the defense and deliver some power on contact. This is an audition for the veteran RB agianst his former club in Cincy. Green Bay brought him in for a reason, so let's see what he can do with the touches he gets tonight.

Bears’ O-Line vs. Giants’ defensive front: Chicago will use some seven and even eight-man protection schemes in their play actiom packages, but once again we will watch left tackles J’Marcus Webb and Chris Williams compete for the starting job. And even with New York DE Jason Pierre-Paul expected to sit Friday night, this is still the best work the Bears can get in the month of August.

Gabbert vs. the Ravens: Plenty of talk about the advanced development of the Jags’ QB leading into his second season as a pro and that’s exactly what you want to hear coming out of Jacksonville. Tonight in Baltimore, a great matchup for Gabbert. Seeing the multiple looks and overload pressure packages from the Ravens’ defense is something you can’t recreate on the practice field.

Russell Wilson: I talked about the rookie from Wisconsin on Wednesday here at the NFP because this is an enormous opportunity for a third round pick. Can he show Pete Carroll and the coaching staff enough to win the starting job over veteran Matt Flynn? Wilson does bring some creativity and play making ability to the game plan, so let’s see how he performs vs. the Chiefs.

More Nick Foles: With Michael Vick out with a rib injury, the rookie gets the start in Cleveland. Foles showed some ability on Monday night vs. the Patriots in Andy Reid’s west coast system and this is just another chance for the QB to prove he can handle the No.2 role heading into the regular season.

Special teams starters : If you want an idea of who is favored to make the final cuts, check out the kicking game this weekend. The players that are starting on the four core special teams units (kickoff, kickoff return, punt, punt return) are in a position to stick with the opening day roster.