With some help from the All-22 tape, here are five matchups I am looking at on the Week 9 Sunday schedule in the NFL—starting with Percy Harvin vs. the Seahawks’ secondary.

1. Percy Harvin vs. Seahawks’ secondary: From a pure matchup standpoint, I’m going to take Seattle’s Sherman, Browner, Chancellor and Thomas vs. Minnesota’s receivers. That’s a legit secondary for Pete Carroll. However, with Harvin we have to think multiple alignments and schemes. The Vikings will use Harvin in the backfield, as a slot receiver, outside of the numbers, pre-snap movement, etc. Creative play calling that puts the football in his hands. There is no question Adrian Peterson could see 20-25 touches tomorrow, but when it comes to making plays in the passing game, Harvin has to be productive for the Vikes to win on the road. 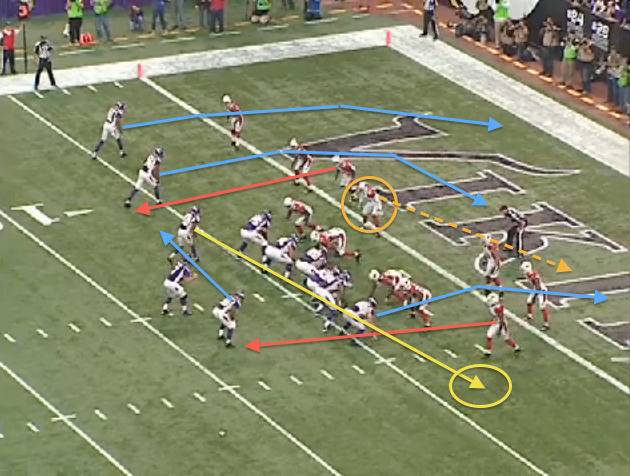 Posse personnel (3WR-1TE-1RB) in a “Slot Open” alignment. Playing vs. Cover 0 pressure (blitz-man), the Vikings use the “Swap Boot” to get Harvin the ball. Tough assignment for any DB to work through the mess off of boot action and stick to coverage. 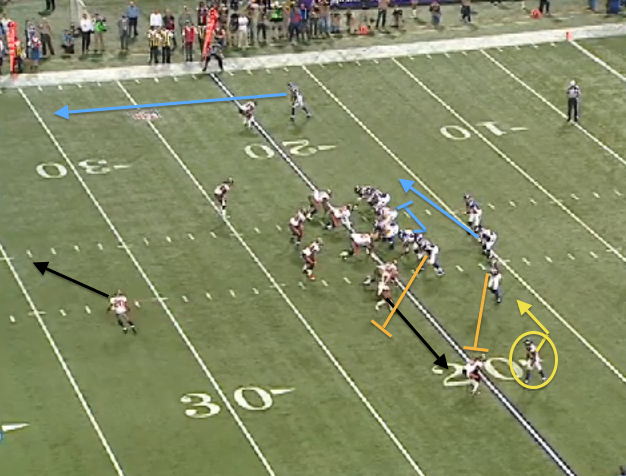 Posse personnel again with pre-snap motion to create a “Doubles Slot” alignment. Harvin (No.1) will run the screen with the slot WR blocking the CB and the LT working up to the second level of the defense. Use a simple screen (with closed side run action) to get the ball in Harvin’s hands with open field (and blockers) in front of him.

2. Eli Manning vs. Steelers’ pressure packages: Along with Cover 3 and 2-Man, Eli Manning has to prep for a variety of zone blitz concepts. Dick LeBeau’s unit will show multiple fronts and use overload pressure looks. Plus, they will set some “traps” in the secondary based off their pre-snap disguise. For Manning, Cruz, Nix, etc., identifying pressure and adjusting their route concepts will be key to beating the Steelers’ pressure. 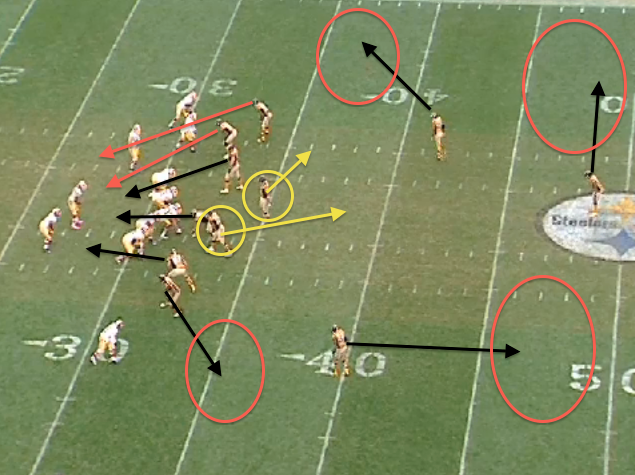 Overload pressure with the SS and the Nickel showing to the closed (strong) side of the formation. Two inside “vertical hook” droppers (yellow) that will match to No.2 and No.3 with a 2-deep shell in the backend. However, the CB and the safety to closed side of the formation are playing “Gold” technique. Instead of jamming and re-routing No.1, the CB will play with a “soft squat” and read No.1 to No.2. Drop No.1 vertical and jump No.2 on the flat, smash, option, etc.

3. Julio Jones, Roddy White vs. Cowboys’ man-coverage schemes: I’m interested to see how the Cowboys matchup in the secondary vs. Jones and White. Earlier this week, I broke down Jones’ TD vs. Philly’s Nnamdi Asomugha. Outside release, run the 9 (fade) route vs. press-man. For Cowboys’ CBs Morris Claiborne and Brandon Carr this is a tough assignment in Cover 1 or if Dallas plays some quarters (Cover 4). And if the Cowboys bring pressure, the ability to flat-foot read, drive on the ball and play the sticks will key to winning on 3rd downs. Remember, Matt Ryan and the Falcons will mix their personnel and use different formation alignments. A lot to play for from the perspective of Rob Ryan’s defense in a game the Cowboys need to have.

All-22: Falcons’ Hi-Lo Opposite 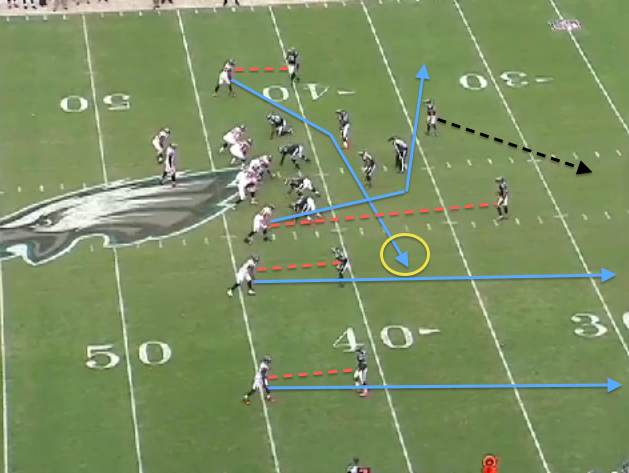 Posse personnel in a 3x1 alignment with TE Tony Gonzalez removed from the core of the formation vs. man-free. Inside, the Falcons are running “Hi-Lo Opposite.” An intermediate crossing route from Gonzalez (Hi) with White (reduced split) coming underneath on the shallow crosser (Lo). 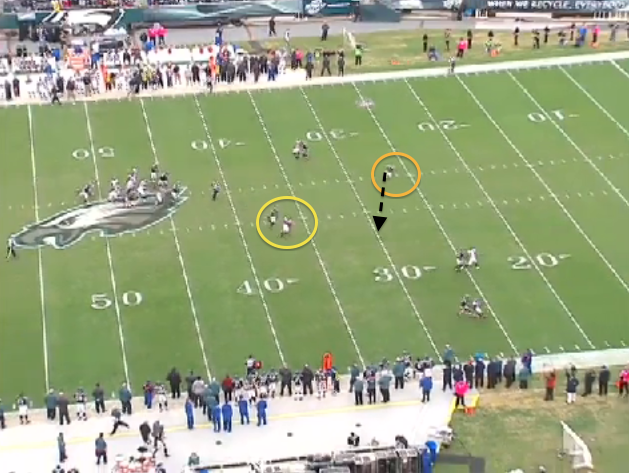 Leverage. That’s it. Asomugha is coached up to align with an outside shade and use his help in the middle of the field. When White breaks underneath, the CB is now caught trailing the route and has to make an immediate tackle after the catch—or this play is out the gate.

4. Packers’ pass rush vs. Cardinals O-Line: Arizona has issues up front. We all know that. It impacts their ability to throw multiple breaking routes down the field plus it puts QB John Skelton in adverse third down situations. If the Packers can consistently get home with four tomorrow, look for Green Bay to sit in 2-Man on third downs and use a deep half safety over the top of Larry Fitzgerald. But let’s not forget about Dom Capers’ pressure schemes—both zone and man. A matchup where the Packers have the ability to dictate the flow of the game from a defensive perspective and put constant pressure on the QB. 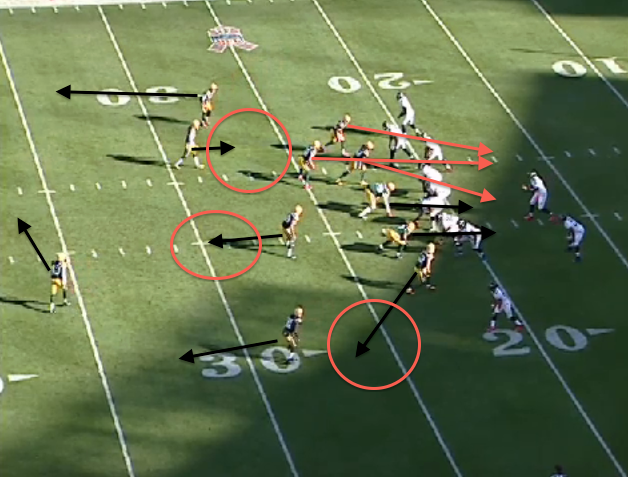 Rush five, drop six (three-deep, three-under). That’s pretty standard when we look at zone blitz concepts across the league. However, the Packers are showing overload pressure to the closed side of the formation vs. a bunch look. Create some confusion, get a free runner off the edge and force the QB to dump the ball.

5. Reggie Wayne vs. Miami’s defensive game plan: Watching some Colts’ tape, you have to account for Wayne within Indy's system outside of the numbers (standard route tree) and in the slot where the WR can win with a “two-way go” (inside or outside release). And I’m curious to see how the Dolphins will game plan Wayne from a scheme perspective when the WR is aligned inside of the numbers. How do you limit Wayne and take away one of Andrew Luck’s top options in the passing game?

All-22: Colts’ OVS (outside vertical stretch) 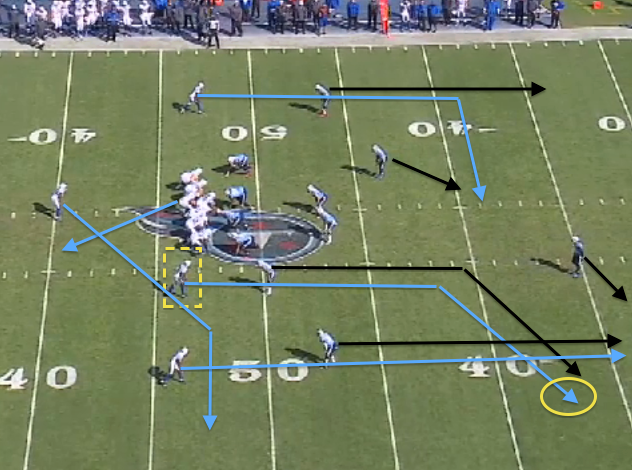 The “OVS” is a 9-7 (corner)-Flat combo you will see vs. 2-Man, Cover 2 and Cover 3. Run off the top of the defense with the clear out 9 route and target the 7 cut. With the Titans playing 2-Man, and Wayne in the slot, Luck can hit the WR on an outside breaking route vs. inside trail-man technique.