Five things to watch for tomorrow in the Week 7 Sunday NFL action….

1. Carson Palmer: The Bengals would be right in scripting a game plan tomorrow against Atlanta that is featured around RB Cedric Benson, but we still have to see Palmer makes some plays in 3rd and medium situations. Basic concepts: the slant, out, option, dig, etc. After watching the tape from the Falcons-Eagles game, look for Cincy to take some shots down the field, but that doesn’t discount what Palmer needs to do in order to move the sticks. Time for the QB to make some plays if the Bengals want to avoid dropping to 2-4 behind Pittsburgh and Baltimore. 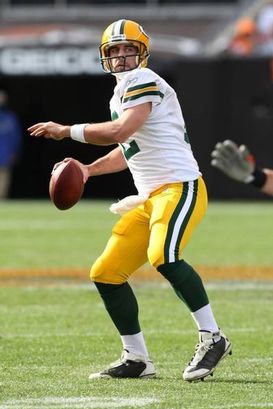 ICONRodgers will have to play big in the red zone vs. the Vikings' Cover 2 defense.

2. Rodgers in the red zone: Have to score touchdowns tomorrow night against the Vikings once Green Bay’s offense gets inside the 20-yard line. Expect to see Cover 2 in the red zone from Minnesota where the corners can sink to create a five-deep look—forcing the QB to take the check down. The routes that beat it? 4 Verticals, Flat-7 and the smash-Post. The Vikings only want to rush four, and if the Packers can’t produce numbers on the ground, putting points on the board is going to fall into the lap of QB Aaron Rodgers. Going to have to make some big throws.

3. Helmet-to-helmet hits: Interested to see what the league office has accomplished with threats of suspensions and the big fines we saw this past week for Brandon Meriweather, Dunta Robinson and James Harrison. Talked it about here at the NFP earlier this week and over at the Chicago Tribune. Does it change the way defensive players attack receivers in the open field, or do we see the same aggressive style of play? Fines could start to reach the six-figure mark, and no player wants to forfeit an entire game check because of a suspension handed down from the NFL. I don’t like seeing players in the secondary launch themselves at defenseless receivers, but I don’t see it coming to an end.

4. The NFC West: Is there a team out west that we can latch onto as a favorite to win the division? I like what I saw from Seattle last week in the win over Chicago because of what they did with personnel in the backfield. Two backs in Marshawn Lynch and Justin Forsett that can both move the sticks. Sam Bradford continues to impress in St. Louis, the Niners got a win last week and ‘Zona will start Max Hall at QB again. Do you see someone that stands out? In Week 7, I am going to lean towards Seattle, but there isn’t a club that looks like they can run away with this division.

5. Bears’ O-Line: Forget about talking rankings and numbers when we look at the Redskins’ defense that is coming into Soldier Field tomorrow. There is no reason for Jim Haslett not to pressure Jay Cutler and the Bears. Mike Martz is going to have to use some six and seven-man protection schemes—especially when the ‘Skins pressure from the secondary. Although extra protection does cut down on the number of options for Cutler in the route tree, the Bears must find a way to give the QB time to read the field. Chicago has a good matchup with WR Johnny Knox outside of the numbers, but that goes to waste when Cutler continues to get hit.