Looking back on the final Sunday of the 2012 regular season, here are five things that stood out from my perspective—starting with A.P. and the Vikings. 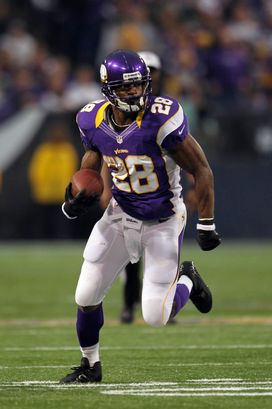 US PRESSWIREAdrian Peterson rushed for 199-yards as the Vikings beat the Packers to get into the NFC playoffs.

1. Adrian Peterson, Vikings make the tournament: I don’t want to take anything away from Vikings’ QB Christian Ponder (16-28-234-3TDs) because he made some big plays today in Minnesota’s 37-34 win over Green Bay. Break down the red zone throws or the deep ball when he caught Sam Shields looking in the backfield on the double-move (Sluggo). But my focus is on A.P. and his 199-yards on the ground (only 9-yards short of Dickerson’s record). I saw the power, speed and the violent style with the ball that has Peterson in the discussion for the MVP award. Find me a safety or a corner that consitently wants to square-up and tackle A.P. for three hours on a Sunday. He takes away the angles, runs through contact and forces defenders to lunge in the open field. That’s four straight wins for the Vikes with another shot at the Packers this Saturday night in the Wild Card.

2. Alfred Morris beats up the Cowboys: How about the rookie? This isn’t new to see Morris produce in the Redskins offense, but in a game for the division title he played like a vet. Sure, RG3 and the Redskins are going to use the Read Option looks that freeze the DE, but we have to recognize Morris’ ability to run the ball in the basic Zone schemes up front as well. That’s where I saw the cutback vision from the rookie and the quick burst to get to the second level. The RB has balance, runs with low pad level and can carry the game plan. 200-yards and 3 TDs on 33 carries. That’s impressive right there as the Redskins take home the NFC East title.

3. Romo’s INTs: We all know this is going to be a discussion point moving forward because the Cowboys’ QB made some questionable throws. Look at the 9 (fade) route early in the game that he left short and to the inside or the 4th quarter INT to the flat. In a crucial situation, that’s a throw off the back foot vs. pressure with air under it. You just cant make that throw with an underneath “buzz” player reading the QB and working to the flat. I give ‘Skins defensive coordinator Jim Haseltt a ton of credit for his game plan. He came to the stadium with multiple blitz packages. That’s smart football. But this is still on Romo and his decision making on another big stage.

4. Decision time in Chicago: Fire a 10-6 coach? That’s a tough call for GM Phil Emery and the Bears. I would make the move because I believe its time for a change in Chicago. Looking at Lovie Smith's team, I understand the personnel issues they have on offense. They need to upgrade the O-Line, the TE position and add some legit speed at WR. But after failing to make the dance after a 7-1 start and now missing the playoffs for the fifth time in the last six years, some new leadership is needed from my perspective. Lovie is a very good football coach, but this could be an opportunity for Emery and the team to go a different direction.

5. Slumping Texans: The Texans have gone from the No.1 seed to playing on Wild Card weekend and it starts with the QB position. If Houston wants to beat Cincy this Saturday and advance, they need to get more consistency from Matt Schaub. And I would also look at the secondary play from the Texans. That has to be better. Checking out the AFC bracket, its hard not to envision the Broncos and Patriots meeting in the Championship game right now. But isn’t that where we had the Texans slotted for most of the season? Houston lost three of four to close out the year and I'm curious to see if they can raise their the level of play in the post season.