Looking back at the Week 13 Sunday schedule in the NFL, here are the top three plays from my perspective: Andrew Luck’s game winner vs. the Lions, Russell Wilson’s overtime TD throw in Chicago and Reggie Nelson’s end zone INT to close out the Chargers.

Let’s break them down and get into some coaching points…. 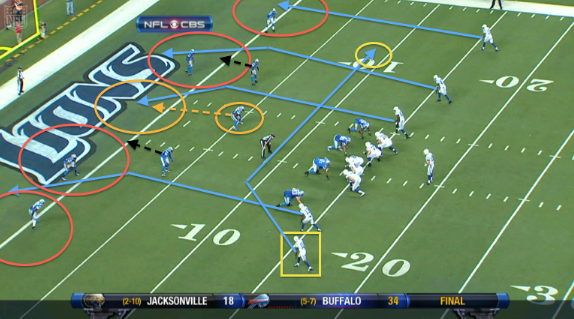 -I want to start with the coverage. In a “Last One” situation (with the ball inside of the 20-yard line) playing Cover 2 is a smart call from the Lions. With both CBs aligned on the goal line—and the Mike Backer running the inside vertical seam—this gives Detroit a “five across” look. Stay square to the line of scrimmage and read the QB. Where do you want the ball to go? Underneath. Take away the top of the route tree and force Luck to dump the ball to the flat or the middle of the field.</p>

-I was taught to call this route concept “Seattle.” Run out of an empty alignment (or a 3x1 formation), the Colts will send four verticals down the field with the No.1 WR to the open (weak) side of the formation (Donnie Avery) on the underneath crosser. Given the game situation, the Colts want to target the two inside seam routes and only target Avery as a final check down option. 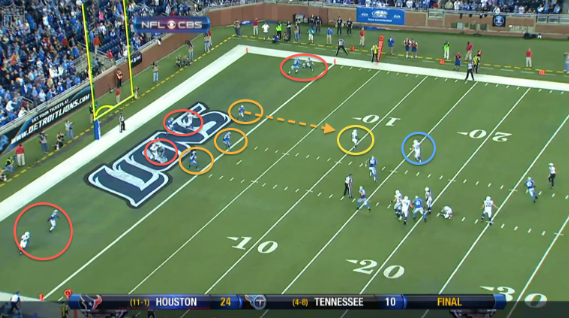 - Rush with contain principles. The last thing you want as a defense in this situation is to allow Luck to step up or break contain as it forces the DBs to “plaster” to their coverage. In practice, this is called a “scramble drill.” Match to the WR and use a basketball technique (defend the player with your back to the basket). No different here as Cover 2 now turns into a matchup zone with the DBs taking their eyes off the QB.

- With the Mike and the two seam-hook defenders dropping to the middle of the field (two verticals) along with the closed side CB matching to No.1 on the 9 (fade) route, there is plenty of room for Luck to dump this ball to Avery. 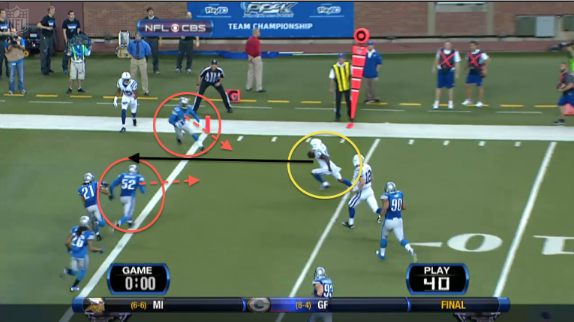 - The CB is going to be late (back to the QB) and Avery has enough speed to beat the angle from the inside pursuit.

- I like the defensive call as it protects the top of the secondary, but this is why rush and coverage work together. Let the QB out of the pocket and the coverage is going to break down. With Luck extending this play and getting the ball to Avery in the open field, the Colts were able to steal one on the road in Detroit. 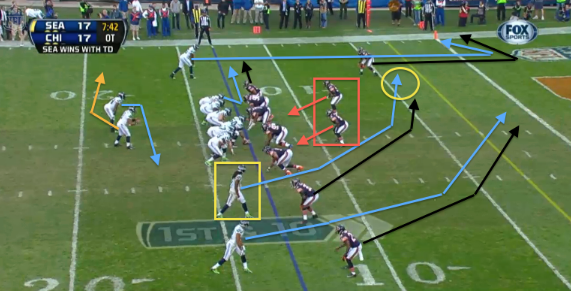 - The Seahawks and Russell Wilson had already established the Read Option late in the fourth quarter and throughout this drive in OT. The ideal setup for the boot action. Wilson will ride RB Marshawn Lynch through the mesh point, force the two LBs to attack the line of scrimmage on the false run read and roll to the closed side of the formation.

- The boot concept is the same regardless of the offensive personnel on the field. No.1 to the closed side will work the outside comeback with No.2 blocking down and releasing late to the flat. That leaves Sidney Rice and Golden Tate to run the two-level crossing routes.

- With the Bears playing Cover 1, Rice will matchup on CB Charles Tillman on a route working away from the defender’s leverage (outside shade). 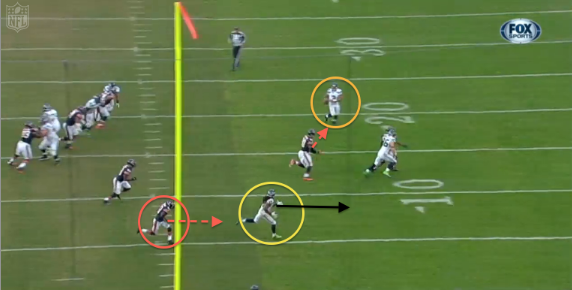 - We saw this from the rookie QB all afternoon at Soldier Field. Because of the boot action, Wilson gets outside of the pocket with eyes down the field. Give Rice time to separate from Tillman on the crossing route and target the WR. 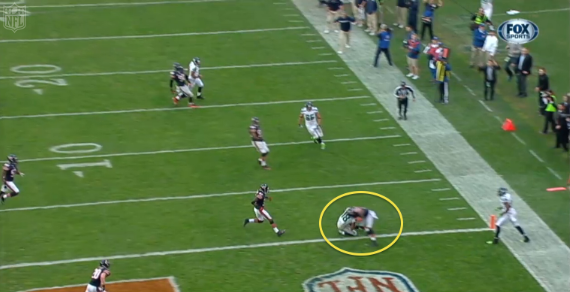 - Rice takes a violent hit from Major Wright on the TD, but this goes back to Seattle producing in the Read Option plus the route scheme vs. Cover 1. With the LBs stepping to the line of scrimmage (no depth on the underneath drop) and Tillman aligned with an outside shade, Wilson has time to let this play develop. Impressive day from the rookie in the Seahawks’ win. 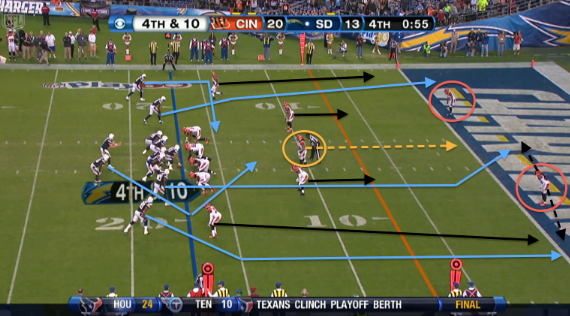 - Quick coaching point on Cover 2 in the red zone (or “Red” 2). The CBs are taught to sink (or trail) No.1 on vertical concepts. I call this a “soft squat” technique where the CB will run with the 9 (fade) route and cushion the deep half safety.

- The Chargers are running a Cover 2 beater (3 Verts) with the open (weak) side Smash and Angle as the check down options for Philip Rivers. With Antonio Gates running the inside seam and No.1 on the 9 route, San Diego can put stress on safety Reggie Nelson to play two verticals. 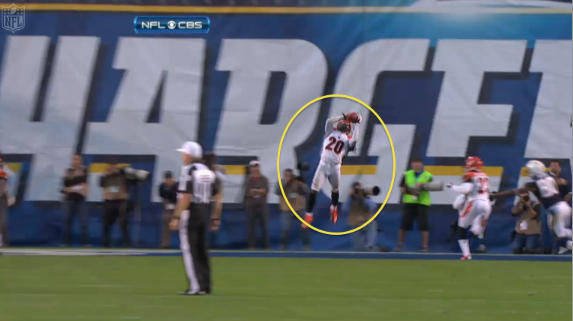 - Remember, in Cover 2 the Mike Backer has to carry No.2 vertically. That’s a tough matchup vs. the speed and athletic ability of Gates on the seam route. However, Rivers is quick to target the fade and doesn’t force Nelson to lean inside (or open the hips). Easy read for the Bengals’ safety to drive this route and finish the play.