Using some cut-ups from the All-22 coaches tape, let's get into five matchups I am looking at on the Week 8 Sunday NFL schedule—starting with RGIII vs. the Steelers’ 2-Man defense.

1.RGIII vs. Steelers’ 2-Man defense: Watching the Steelers’ tape this week, you are going to see 2-Man (2-deep, man-under), Cover 3 (3-deep, 4-under) and zone pressure from Dick LeBeau’s unit. And when Pittsburgh wants to play coverage on third and 7-plus situations, look for the safeties to get to the top of the numbers with underneath defenders in a “trail-man technique.” For Griffin and the ‘Skins, the key is to occupy the two deep safeties (think 9 route) and target the middle of the field (seam, post) or run outside breaking concepts (2-Man defenders will play with inside leverage). I like the 2-Man scheme, but there are ways to exploit it. 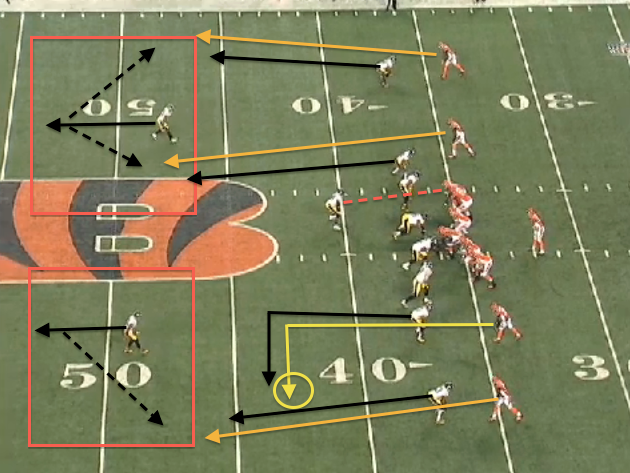 - Steelers in their 2-Man alignment with the Bengals sending two verticals to the closed (strong) side of the formation and working the out route from the slot to the open (weak) side. Play off the defender’s leverage, break to the numbers and move the sticks.

2. Eagles’ red zone defense vs. Michael Turner: The Falcons are loaded when we talk about red zone options for QB Matt Ryan. Atlanta has TE Tony Gonzalez inside of the numbers (or removed as a backside X receiver), Roddy White and Julio Jones (always have to play for the fade and double move), plus Michael Turner. Atlanta can run the ball in the inside of the 20-yard line and that is vitall when the field shrinks. Think 2-Back power schemes (Power O, Counter OF, Lead). How do the Eagles and new defensive coordinator Todd Bowles script a game plan here for the Falcons? I wouldn’t be surprised to see some Cover 4 (quarters) that allows both safeties to flat-foot read their run/pass keys and add to the front to limit Turner.

All-22: Falcons’ Counter “Crunch” vs. Redskins 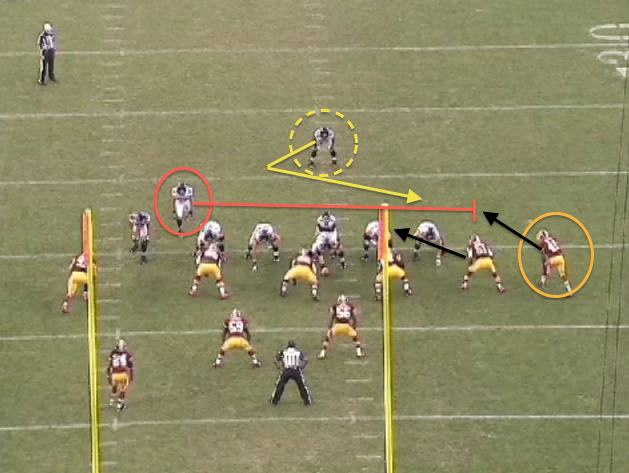 Counter action from the Falcons (bunch alignment). Turner will step to the play side with the “U” TE coming back across the formation on the “crunch” block. 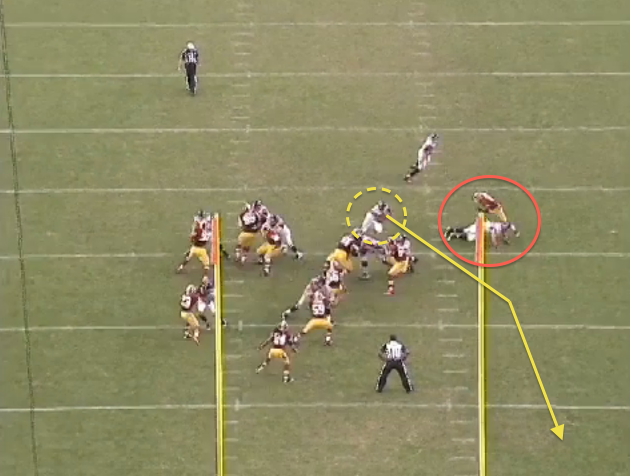 With the TE cutting the safety walked up to the line of scrimmage and the LBs stepping to the play side, Turner can cut back and get up the field for a TD.

3. Cowboys' secondary vs. Victor Cruz in the slot: Cruz will align outside of the numbers and run the deep curl, 9 route, comeback, etc. However, when the Giants need a play in a crucial game situation, look for Cruz to align inside of the numbers (slot). We all saw how the Giants’ WR beat the Redskins’ “slice” call last week to get over the top of the secondary on the deep inside seam route for the winning score, but I’m looking more at the short to intermediate route tree on 3rd downs. The Hi-Lo, option, “whip” option, angle, etc. Routes where Cruz can sit down at the sticks vs. zone coverage or work away from a defender’s leverage in man situations. The Cowboys and coordinator Rob Ryan needs to game plan to take Cruz out of the route scheme when he aligns in the slot. 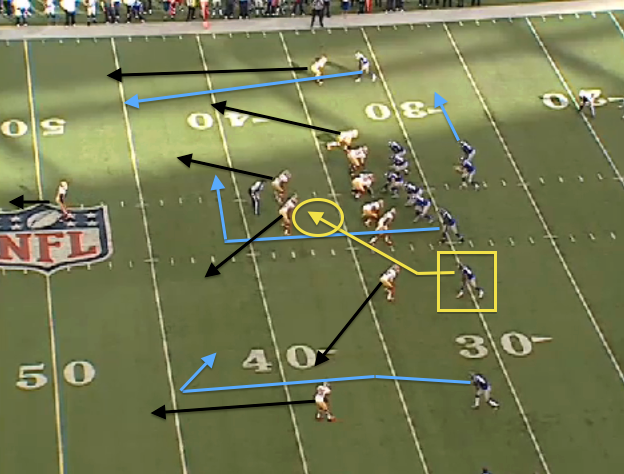 - The base Hi-Lo concept vs. zone coverage. With the Redskins playing Cover 3, the TE will work vertical on the release and break on the intermediate dig route (Hi) with Cruz running the underneath shallow crosser (Lo). If Cruz reads zone, he sits it down. If he reads man, he works across the field or breaks back to the numbers on the “whip” action.

4. Peyton Manning vs. Saints’ secondary: This is a tough matchup for a Saints’ unit that has given up big plays. We could see some more Cover 2 from New Orleans tomorrow night in Denver, but regardless of the scheme called in the huddle you have to hold your looks as a DB vs. Manning. The Broncos’ QB will run this offense (especially in the no-huddle) from the line of scrimmage. Show pressure—or move early to a deep middle of the field alignment—and Manning will check to target the coverage/scheme. The “Levels” concept, “Semi-Series” (Semi-Seam, Semi-Curl, etc.), the Hi-Lo, etc. A great test for safeties Malcolm Jenkins and Roman Harper. 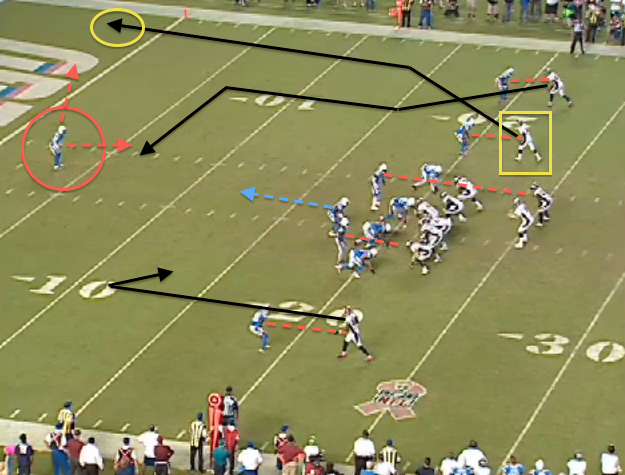 - Manning sees press-alignments on the outside with a single high safety look. The QB checks at the line of scrimmage, adjusts the route scheme and throws a man-coverage beater (“Switch” route) for a TD to WR Brandon Stokley.

5. Panthers’ option schemes vs. Bears: On a short week, Lovie Smith’s defense has to prep for some option football from the Panthers and QB Cam Newton. Think college spread sets here with the Read Option, Inverted Veer, Triple Option, etc. I broke down an example of the Panthers’ Triple Option scheme vs. the Cowboys in the Chicago Tribune on Friday and the Bears should expect to see some designed option reads from Newton. My question: Can Chicago limit the option schemes with their 7-man front (Cover 2 in the secondary) or will this defense continue to use multiple coverages (Cover 3, Cover 1, Under 10) and walk a safety down into the run front? I’m very interested to check out the Bears’ defensive game plan tomorrow.

All-22: Panthers’ “Inverted Veer” vs. the Seahawks

- On the “Inverted Veer,” Newton will ride the RB through the mesh point and read the closed side DE with the open side guard pulling and the TE on an “arc” release to the second level of the defense.

- Base read for Newton: “option” the DE. If the DE attacks up the field on the RB, Newton keep and follows the guard up through the hole. If the DE crashes down the line of scrimmage, Newton hands the ball off. Just one of the many schemes the Panthers have built into their offense.