Now that we are through the Thanksgiving schedule and Arkansas-LSU, let’s focus on Sunday in the NFL. Here are five things I am watching for tomorrow—starting with Leinart and Hanie taking No.1 snaps.

1. Leinart gets the start: The entire AFC will be watching the Texans-Jags matchup tomorrow because of Leinart. A 7-3 football team that can run the ball with production and play defense under Wade Phillips. But you still need to see the plays made from the QB position. Think 3rd downs here and in the red zone. Can Leinart convert, move the sticks and play efficient football (without turnovers) inside of the 20-yard line? WR Andre Johnson is listed as “probable” and is expected to see the field tomorrow. Could be a nice target for the former first-round pick. 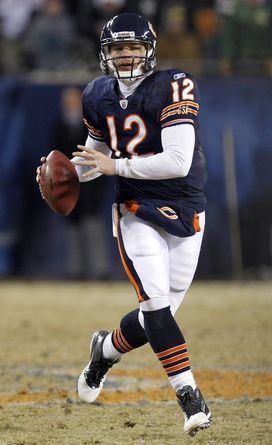 Caleb Hanie will start at QB for the Bears out in Oakland on Sunday.

2. Caleb Hanie vs. the Raiders: Keep an eye on the Bears' offensive game plan tomorrow in Oakland. There is no question Chicago’s defense and special teams will have to play big without Jay Cutler under center. However, I want to see Mike Martz’s play calling with the No.2 QB running the huddle. Expect plenty of Matt Forte and Marion Barber in early down and distances and look for some of Martz’s classic routes when Hanie has to make a throw: Hi-Lo crossers, dagger (deep dig route), OVS (outside vertical stretch), H-Post (angle route), etc. Let’s see how the QB responds.

3. Broncos’ defensive pressure: We know what we are going to get from Tebow and the Denver offense: option football, unique looks and multiple personnel groupings. But don’t forget about the Broncos’ defense vs. Philip Rivers and the Chargers. Look for plenty of edge pressure from rookie Von Miller and Elvis Dumervil working against a beat up San Diego O-Line. How does that translate to the secondary? A matchup I hope to see of Champ Bailey vs. Vincent Jackson. The Chargers’ WR has vertical speed and the ability to create separation when he stems his routes up the field. However, it starts up front. Denver has to win on the edge and force that ball to come out so the secondary can make some plays.

4. LeSean McCoy’s production: If the Eagles want to keep Brady and his TEs off the field, McCoy has to be the focus of the game plan. With Vince Young expected to get another start, put the ball in the RB’s hands. Look for the sprint draw, edge runs and the screen game with McCoy. Watching him play this season, there aren’t many backs that can duplicate his ability to make defenders miss in the open field and cut back when running lanes open up. If I am Andy Reid, there is no question I look to take some shots early in the vertical passing game. But the game plan is about long, sustained drives that feature McCoy.

5. Rex and the Jets: If the Jets want to talk playoffs, then they have to get this one tomorrow at home vs. the Bills. This Buffalo squad is beat up and just lost RB Fred Jackson for the season. However, this is more about the Jets—and their offense—from my perspective. To make a late season playoff run, we have to see much better play from Mark Sanchez. I can talk about Shonn Greene and the run game, or the amount of targets for WRs Santonio Holes and Plaxico Burress, but the production had to come from the QB. Protect the ball (vs. pressure), finish drives and put points on the board. Time for Sanchez play like a veteran.