Before we talk football, the National Football Post sends out its thoughts to the Raiders family after the passing of legendary owner Al Davis...

Let’s take a look at the Week 5 schedule, talk personnel, break down some key matchups and discuss some Xs and Os. Here are five things I am watching for tomorrow…. 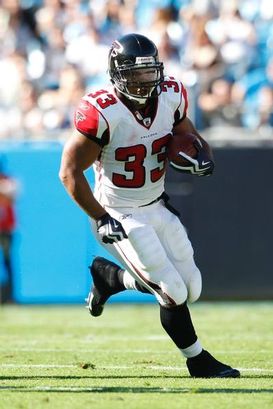 ICONIf the Falcons can establish the run game with Michael Turner vs. the Packers, the deep ball comes into play.

1. Michael Turner vs. the Packers’ front seven: If I am calling plays for the Falcons, Turner is the focus of my game plan. Control the tempo, use the two-back downhill running game and keep Rodgers and the Green Bay offense on the sideline. Think of a call sheet that leads with the run game to set up boot, play action and the vertical shots near mid-field to WRs Roddy White and Julio Jones. The Falcons have the ability to use a variety of personnel groupings and alignments with QB Matt Ryan, but way I see it, winning up front is the key for Atlanta at home.

2. Brady vs. the Jets’ secondary: To beat New England, you must take away the intermediate route tree. The Jets can play press-coverage with Revis and Cromartie outside of the numbers here, but what is their plan vs. Gronkowski and Hernandez when the ball moves inside the 20-yard line? This is where Brady will throw the Hi-Lo concepts and work his TEs out of bunch looks. Man-coverage beaters with routes that break back inside of the numbers. Not easy to take that away vs. Brady.

3. Eagles’ run defense: This Philly defense has to tackle. Sounds simple, but I see a unit that can’t get off blocks up front, is slow to react at the linebacker position and doesn’t wrap up in the secondary. I expect the Bills to ride RB Fred Jackson in the game plan and test this front seven early. And in a game Andy Reid and the Eagles must have to get back in the NFC East discussion, this defense has to get off the field and set up Michael Vick with some scoring opportunities. Won’t be easy against a Bills’ offense that can move the sticks.

4. Arian Foster vs. the Raiders: On Friday, I wrote up my own defensive game plan vs. the Texans’ offense without WR Andre Johnson in the lineup. My main goal: play press-man on the outside and drop an extra safety into the box to limit Foster. Houston will see some eight-man fronts from Oakland, but the key here is to establish the run game, win against a physical Raiders’ front and use the TE position in the short-to-intermediate route tree. No question the Texans’ lose some big play ability without Johnson, so let’s see how they attack Oakland early.

5. Hasselbeck’s production: Here is what the Titans’ QB will see from Dick LeBeau’s defense: zone blitz concepts, overload pressure and some 2-Man (2-deep, man-under) in passing situations. I don’t have any concerns about the veteran QB reading the defense at the line of scrimmage, but who is going to make plays in the passing game? This is the first real test for the Titans’ offense without WR Kenny Britt in the lineup. I understand this Steelers’ defense is struggling to take the ball away, but when you look at this scheme, you still have to avoid third and long situations. Tennessee needs to win on early down and distance situations with RB Chris Johnson to set up Hasselbeck if they want to move to 4-1 on the season.