As we get ready for Sunday, here are five things I am looking at on the Week 3 NFL schedule...

1. Texans’ defense: I want to buy Houston as a legit contender in the AFC this season, but I am also very interested to see how Wade Phillips’ defense plays tomorrow on the road in New Orleans. Can the Texans’ blitz front get home and what do we see from the secondary vs. Drew Brees? Because if you want to send pressure at the Saints QB you have to take away the “hot reads,” play with leverage and drive on the football with solid technique. Great early season test for Mario Williams and the Houston defense in the Dome. 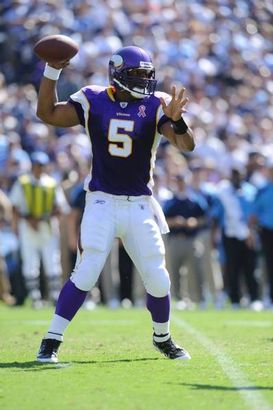 ICONTo avoid an 0-3 start, the Vikings need to get some solid production from McNabb vs. the Lions on Sunday.

2. McNabb’s production: Has to be there for the Vikings with the 2-0 Lions coming to town. No question Adrian Peterson has to produce vs. the Detroit front seven, but after McNabb’s first two weeks as the No.1 QB in Minnesota, this team needs the veteran to make some plays. Think crucial situations here (3rd downs, red zone, 2-minute drill, etc.). The Vikes don’t need big numbers from McNabb, but they do have to see their QB show up when he needs to make a throw. If not, Minnesota will be looking at an 0-3 start. That’s a problem.

3. Bears' special teams: I broke down some keys to the NFC North matchup on Thursday at the NFP, but we can’t talk about Lovie Smith’s squad without discussing the kicking game. If the Bears struggle to move the ball offensively vs. Dom Capers’ defense, field position will play a big role. Generate return yardage with Devin Hester and Johnny Knox—and don’t forget about their coverage teams. Because the Packers can produce with rookie Randall Cobb returning kicks. Chicago needs to win this phase of the game if they want to knock off the Champs at Soldier Field.

4. Bills vs. Brady: Take some risk here. That’s my defensive game plan vs. Brady and the Patriots offense. I want to see if the Bills will send some pressure and try to move Brady out of the pocket. Use six and seven-man blitz schemes, sit on routes and make some big plays on the defensive side of the ball. No need to drop back in coverage—because Brady will eat that up. And if the Bills want to beat the Patriots for the first time since 2003, they need to hit Brady and get their hands on the football in the secondary.

5. Eli Manning vs. the Eagles: The Giants' QB looked shaky in the Monday night win over the Rams, but why not give him some help with the running game? Lead with Ahmad Bradshaw and Brandon Jacobs, control the tempo of the game and keep the Eagles offense off the field. This gives the Giants opportunities to take vertical shots down the field in the play action game and it also keeps Manning out of 3rd and long situations vs. the Philly CBs. And when that happens, the Giants can lean on the short to intermediate passing game to move the sticks.