Let’s take a look at the Sunday schedule in the NFL and talk personnel, matchups, plus some Xs and Os. Five things to watch tomorrow as the Wild Card and playoff discussion takes center stage.

1. Carson Palmer vs. Packers’ secondary: Green Bay got the win in Week 13 over the Giants, but what stood out from my perspective was Eli Manning’s ability to throw the vertical passing game. The Giants’ QB challenged the top of the defense and allowed his WRs to go make a play. With the Raiders coming to Lambeau, we are talking about an offensive scheme that is built on the downhill power running game. However, don’t discount Palmer’s ability to work the vertical route tree outside of the numbers. The Raiders have speed at the WR position and will throw the 9 (fade) route and the deep post off of play action and vs. pressure. Let’s see if Tramon Williams, Charles Woodson, etc. can get their hands on the ball. 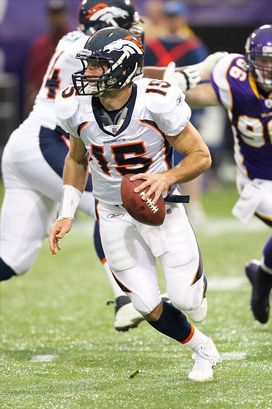 ICONThe Bears' defense will have to play with discipline vs. Tebow and the Broncos.

2. Tebow vs. the Bears’ defense: This is a good matchup to watch because of the style of defense the Bears play under Lovie Smith. Base calls (Cover1, Cover 3, Cover 2) vs. a unique offense in Denver. The Bears will see some option football (read option, speed option, etc.) with Tebow at QB. And with only three days to prep for a new scheme (plus a non-divisional opponent), run-pass reads and option responsibilities will be key. One player to keep an eye on is Julius Peppers. The Bears’ DE can have a major impact vs. the option and has to win on 3rd down situations vs. a QB that did show the ability to beat Cover 2 in the Week 13 win over the Vikings.

3. Romo’s red zone production: National stage for the Cowboys’ QB with the Giants coming to town in a crucial NFC East game. This New York defense has a front four that can get to the QB (and will bring pressure), but over the last two weeks they have been exposed in the red zone. Time for Romo to make good decisions with the ball, target the Giants’ Cover 2 shell and work the middle of the field with TE Jason Witten inside of the 20-yard line. There will be opportunities to score points for the Cowboys in a game that can give them control of the division in December. But the production has to be there at the QB position.

4. Rex Ryan’s pressure scheme: I give Chiefs QB Tyler Palko plenty of credit for protecting the ball in the Week 13 win over the Bears in Chicago. However, this is a much different defensive scheme he is going to see on Sunday when K.C. travels to New York. Look for pressure (early) from the Jets’ defense and multiple looks up front to create some confusion in the QB’s route reads. If the Jets are a going to make another late season push into the post-season, this is a matchup they should win. Force turnovers, give Mark Sanchez easy scoring opportunities and get off the field on 3rd downs. Bottom line here: dictate the flow of the game from a defensive perspective vs. Palko.

5. Arian Foster and the Texans’ run game: No Andre Johnson tomorrow in Cincy and a rookie QB making only his second career start in the NFL. What does that lead to? More touches for Foster and Ben Tate. I expect the Texans’ game plan to feature the RB position and focus on quick play action that allows T.J. Yates to make basic reads. If you want to watch a team that is going to grind out ball games with their running game and a top-tier defense, then check out Houston tomorrow. It doesn’t have to look pretty to get another win and continue to push for an AFC South title.