Let’s run through my game notes from the Week 7 Sunday schedule in the NFL. Some Xs and Os, personnel, game plans, etc. Ten things you should be talking about today—starting with Victor Cruz’s TD to beat the Redskins.

1. Cruz beats the Redskins “bracket” look: As I have said before, Cruz makes his money in the slot. No different on Sunday when Eli Manning hit the WR for 77-yard TD that put the Giants ahead for good. Washington was playing what I see as a “slice” call (2-on-1) vs. Cruz. Smart to take away the option route, plus the deep dig, curl, etc. However, when the safety sits for an outside breaking cut—with the Nickel CB playing hard to the inside—you still have to account for the straight vertical seam. Can't get split in that situation. The Giants had the perfect route call to the beat the “slice” or “bracket” look from the Redskins’ secondary in the 27-23 win. 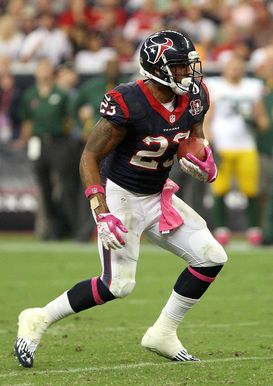 US PRESSWIREArian Foster and the Texans rolled over the Ravens 43-13.

2. Texans blast the Ravens 43-13: Houston beat up Joe Flacco, forced turnovers, used the TE position and controlled the line of scrimmage (239-yards rushing). We knew coming into this game that an already suspect Ravens' defense had a tough matchup (even with Terrell Suggs returning to the field), but I didn’t expect the Texans to roll like this. If you are a Houston fan, this should be encouraging after the loss last week to Green Bay. The Texans played like the team we hyped up all season long and put it on John Harbaugh's club.

3. Rodgers puts on another show: That’s two straight weeks where the QB has played at an MVP level within the Packers’ offensive scheme. Rodgers finished with 342-yards and 3 TDs on 30-37 passing. However, let’s not forget about these wide outs. Last week it was Jordy Nelson and James Jones lighting up the Texans’ secondary and on Sunday in St. Louis it was Nelson again along with Randall Cobb. Look at the back shoulder grab from Nelson plus Cobb on the quick “Nod” route (red zone double-move) and the deep inside seam when Rodgers extended the play. Big day for the QB and this passing offense in the 30-20 win over the Rams.

4. Smart play from Saints’ Patrick Robinson: Every DB coach I played for in the NFL taught their guys to push WRs out of the end zone during the “scramble drill.” Find the WR, “plaster” the coverage and toss him out of bounds (legal play with the QB outside of the pocket). That takes them out of the route (can’t be the first player to touch the ball). With the Bucs needing a TD on the final snap of the game running the “Pin” or “Mills” concept (No.1 runs dig/post, No.2 runs inside curl/option), this is exactly what we saw from the Saints’ CB vs. Mike Williams before the WR came back in bounds to make the catch. Smart play from Robinson knowing the situation in New Orleans’ 35-28 win on a day when Drew Brees threw for 377-yards and 4 TDs.

5. More questions about the Patriots: Any win is a plus in this league. Especially within the division. Let’s start with that in New England’s 29-26 OT win over Sanchez and the Jets. However, are you really sold on this Patriots’ squad? I saw more issues in the secondary and again the Patriots failed to close out an opponent when they had a chance in the 4th quarter. You can’t let Sanchez put together a 92-yard drive and then respond with a three-and-out on offense. That’s not good enough. And if it wasn’t for Tom Brady and the no-huddle attack, this game doesn’t even get to OT. Like I said, you take wins in this league any way you can get them. But the Patriots are far from dominant right now and have a lot to clean up.

CONTINUE TO PAGE 2 FOR THE REST OF MY GAME NOTES