Let’s roll through the Week 3 Sunday schedule in the NFL. My notes on some Xs and Os, game plans, personnel, etc. Ten things that you should be talking about—starting with Flacco’s 2-Minute drill to set up the Ravens’ win. 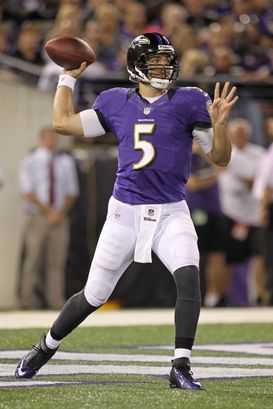 US PRESSWIREFlacco and the Ravens were aggressive in their play calling to set up the winning FG.

1. Flacco’s final drive: Let’s look at the Ravens’ QB in the final drive to set up the game winning FG. Flacco starts with the back shoulder fade to Jacoby Jones, hits Dennis Pitta on the quick out and then comes back to the TE again on the 7 (corner) route. There were plenty of flags (and missed calls) in both secondaries tonight, but I like the idea of the Ravens going back to the 9 (fade) route to Jones again in the 2-Minute drill where they picked up the P.I. call. Be aggressive and force the Patriots’ secondary to make a play. Big win for Baltimore.

2. The 3-0 Cardinals: Time to buy the Cardinals and their 3-0 start? Kevin Kolb put up some numbers today in the win over the Eagles, but let’s talk about the defense—again. Last week this Arizona unit limited Tom Brady and they did the same today vs. Philadelphia. Pressure the QB, take away the vertical passing game and force turnovers. Arizona racked up five sacks vs. Vick and also scored on defense. That wins.

3. Ponder in the red zone: You can see the speed of the QB on the 23-yard TD run and I like the call to get him outside of the pocket in the boot game. The second TD throw to TE Kyle Rudolph: “shake” route. TE presses up the field, sticks to the out and then gets vertical. I didn’t see this one coming, but with Ponder’s production inside of the 20-yard line, plus a solid run game and defense that forced Alex Smith into turnovers, the Vikings took down one the league’s top clubs. Impressive win for Leslie Frazier’s team.

4. The 0-3 Saints: There is plenty of blame to go around when you drop three straight to open the season, but I’m looking at the poor defensive play in New Orleans. Is it scheme related or this about personnel? There can be an adjustment period as a player with a new coordinator on defense. No question about that. But giving up 233-yards rushing to Chiefs’ RB Jamal Charles goes beyond anything you can draw on a chalkboard. Get off blocks, take solid angles to the ball, break down and tackle. Something is missing here.

5. Revis’ knee injury: We have to wait for the report on the knee injury to the Jets’ CB, but if Revis is out for an extended period of time this is a major blow to New York. Think of what Revis brings to Rex Ryan’s game plan. When you have a top tier CB it allows you to play a mix of coverage and pressure in the secondary and adjust your base schemes because of what he brings to the field. Can you run the same game plan without Revis? Sure, but don’t expect the same results.