Let’s breakdown five plays from the Week 8 Sunday NFL schedule and talk some Xs and Os. Without the All-22 tape (comes out on Tuesdays), I pulled some cut-ups from the TV copy to give you a look at route schemes, coverages, technique, etc. 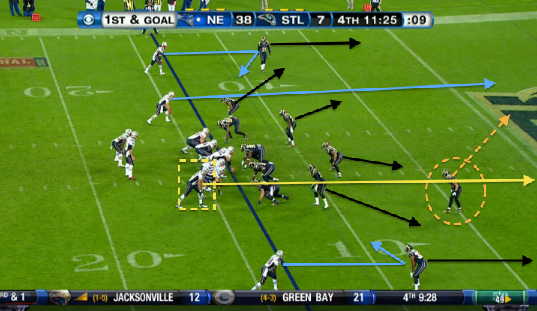 -Quick inside run action from Brady and the Patriots with the Smash-Seam concept. The No.2 receivers (Gronkowski, Welker) will take an outside stem and push vertically up the field with the No.1 receivers (X, Z) on the Smash (hitch) routes.

- All the stress is on the Rams’ FS when you play Cover 3 (3-deep, 4-under). If the underneath defenders (“middle hook” and “curl-flat”) don’t sink and get enough depth to impact the seam, the FS is in a tough spot playing two inside vertical concepts. 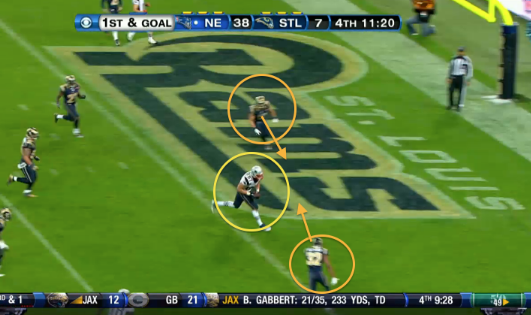 - Brady holds the FS in the middle of the field and throws this ball between the hash and the numbers. Even though No.1 does not threaten the CB vertically, this is still on the FS to read the QB, break on the throw and take a perfect angle to make a play. That’s not easy when Brady has time to look to the open (weak) side and then come back to Gronkowski for the TD. 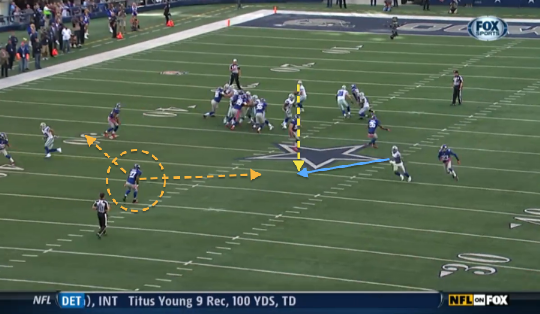 - I wanted to show this angle because it gives us a good look at FS technique in the deep middle of the field. Brown is square (with the proper depth) and in a position to read the QB with the CB playing from an outside leverage position vs. Bryant.

- Read the eyes of the QB. Romo is locked in on Bryant. And because of the depth the Giants’ FS has in this situation, he can break at a 45-degree angle on the throw. 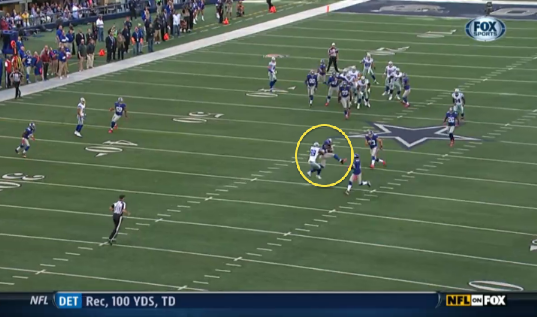 -The finish from Brown. Break in front of the receiver and go attack the ball. Just one of the four picks Romo threw today in the Cowboys’ loss to the Giants.

- There is a reason I am talking about a basic slant route here—and it starts with the game situation. The Bears needed to get in position to kick a game winning FG and went back to Brandon Marshall on the slant route multiple times to move the ball down the field.

- Carolina is playing a “soft” Cover 4 (quarters). Look at the depth of the SS (aligned over No.2 in Cover 4) and the cushion the CB is giving Marshall. Plus, with the nickel “squeezing” No.2 on the slant, Marshall gets a free release off the line and breaks back to the middle of the field. 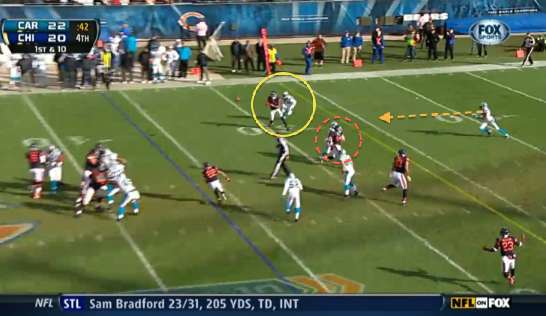 - Size and length. That’s what the Bears have in Marshall when we discuss inside breaking concepts. Create leverage with the route stem. Look (again) at the cushion here on the WR when he cuts inside.

-What would I have called in this situation? Cover 2 to get a jam on Marshall at the line of scrimmage or Cover 1. You have to challenge WRs in 2-minute situations with the game on the line. This was too easy for Cutler, Marshall and the Bears to get into FG range with a basic route. 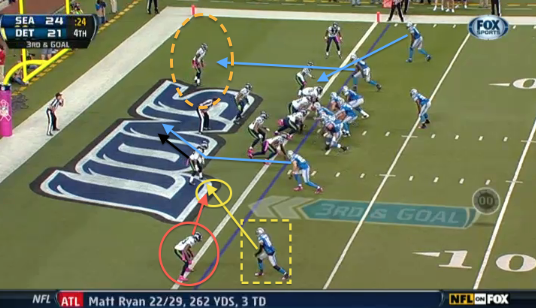 - Head up alignment from Seahawks’ CB Brandon Browner vs. Young. To the open side of the formation, Seattle is showing a Cover 2 look with the CB in a “soft squat” and SS Kam Chancellor aligned in the deep half. 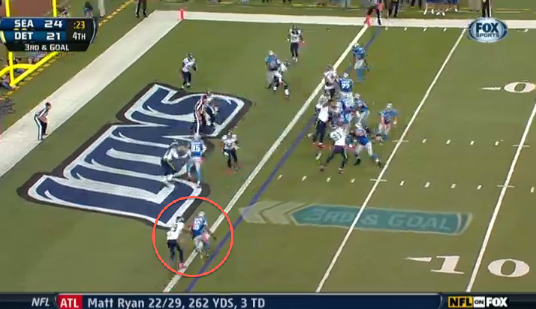 - Why is Browner beat? He gives up the inside. With the Sam Backer late to burst underneath the slant, there is no help for Browner once he allows Young to win on the release. And the throw from Stafford is low and to the inside. Perfect ball placement to win this game. 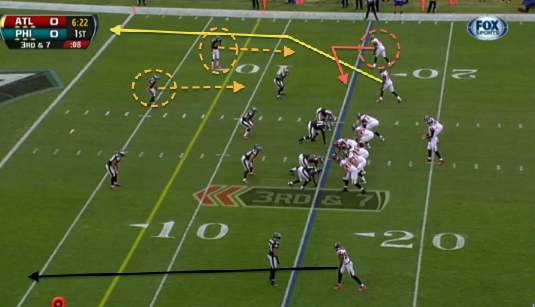 - I wanted to look at this route to highlight the lack of eye discipline from the Eagles’ secondary. Ryan and the Falcons show the “Tunnel” screen action with Julio Jones and throw the “wheel” (or “rail”). A play action scheme that always shows up vs. Cover 4 defenses in the red zone.

- You have to read your keys in the secondary. Focus here on the CB and the FS. Both DBs stick their eyes to the line of scrimmage and drive downhill.

- The SS in Cover 4 must read the release of No.2 and the CB will look inside to help (think 7 route) when No.1 runs a Smash, underneath crosser, etc. Play the technique of the defense. 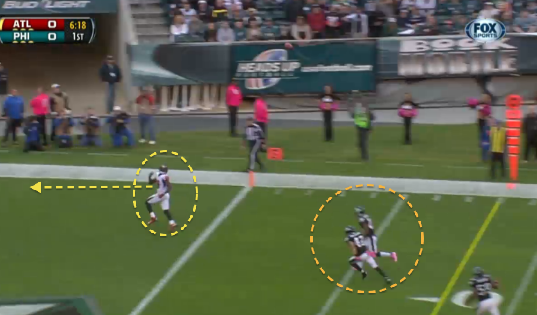 - A quick view of the Eagles’ DBs when this ball is in the air. That’s just not good enough when you give up a free play because you aren’t reading your keys. Tough day all around for Philly.