With NFL training camps opening up this week across the league, here are ten questions I am thinking about. From the Saints to the multiple QB competitions, let’s check them out.

1. Can the Saints survive without the head coach?

Yes, Drew Brees is now under contract and there is no question he the leader from a locker room perspective. I understand that. However, this is an unique situation in New Orleans without head coach Sean Payton for the entire 2012 season. The way I see it, multiple leaders now have to emerge from the Saints roster and it will be a challenge to keep the daily focus entirely on football during camp. Pro ball players are usually at their best in adverse situations and that is exactly what this Saints team is faced with as they prep to put the pads on. I’m very interested to see how they react. 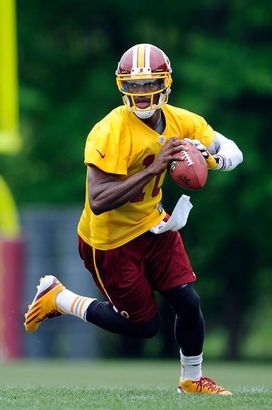 The Redskins have multiple options in the playbook with RGIII under center.

2. Will the Redskins cater their offense to RGIII?

If you look at a Mike Shanahan game plan, it is loaded with movement passes (boot, swap boot, sprint, dash, etc.). That fits when you hand the ball to rookie QB Robert Griffin III. However, what's next? With RGIII, we are talking about a unique player at the QB position. What about some spread looks, the read option in crucial game situations and creative play calling that caters to his skill set? The ‘Skins have an opportunity to expand their game plan because of the talent they now have at the QB position. Let’s see what they do.

3. Did the Packers and Patriots fill their needs on defense?

Go back to the draft where both Green Bay and New England selected young defensive talent. Edge rushers, secondary help, etc. Smart moves when we look at these clubs and their issues from the 2011 season. But can you count on rookies to make an immediate impact in the game plan? That’s my question with the Packers and Patriots. They both scooped up multiple rookies that are expected to play a role on the defensive side of the ball—and now we get to find out if they are game ready by the end of camp.

4. Do the Cowboys have the CBs to win the East?

I’m a big fan of what Rob Ryan wants to do defensively down in Dallas and now he has two CBs that allow him to be even more aggressive in his play calling. The Cowboys spent big via free agency and the draft to pick up veteran Brandon Carr and rookie Morris Claiborne. Think blitz-man here, zero-coverage and seven (or even eight) man pressure schemes. When you have two CBs you can trust out on an island, it opens up the possibilities within the playbook to go after the QB. Claiborne has to develop quickly in camp, but I like the look of this Cowboys defense right now.

5. Can Manning take the Broncos to another level?

I’m anxious to see the Broncos offense throughout the preseason from a scheme perspective and to find out where Manning is in terms of his recovery from a neck rehab. Do the Broncos lean on the passing tree that Manning produced with in Indy and does the former Colts QB still resemble the elite player we know? Its too easy to look at this Denver club as the early AFC Wet favorite because of the addition of Manning. I want to watch them go to work first.

6. Is Mark Sanchez the unquestioned No.1 in New York?

Focus on Sanchez when looking at the Jets. Because for all of the talk about Tim Tebow, the story here is Sanchez. The veteran QB doesn’t have to worry about losing his job or coming off the field for specific packages designed to utilize Tebow’s skill set if he takes care of his own business as a pro QB. Run the offense, protect the ball, make smart decisions down the field, etc. This is Sanchez’s job if he produces. 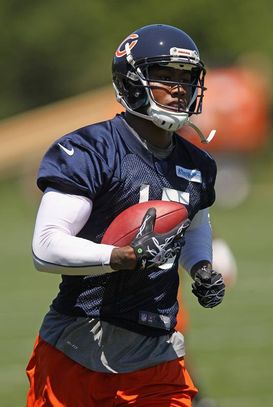 The Bears will have a new look with WR Brandon Marshall and coordinator Mike Tice.

7. What does the Bears game plan look like under Mike Tice?

Chicago’s new offensive coordinator will be calling plays for the first time in his coaching career and the Bears have some new talent at the WR position with Brandon Marshall and rookie Alshon Jeffery. Two size/speed players for QB Jay Cutler. But with the same questions along the O-Line, how will Tice will cover up those issues? I would expect Chicago to lead with the run game, stretch the middle of the field using play action (think inside verticals) and utilize the TE. And its on Tice to put his QB in a position to win based on his game plan and call sheet.

8. What should we expect from the Eagles defensively?

The Eagles had plenty of problem defensively last season from scheme, to discipline and technique under coordinator Juan Castillo. But watching this club play out the schedule, they did improve at the end of the year. Move to this offseason, the addition of LB DeMeco Ryans (an immediate upgrade at the LB position) and more edge speed via the draft. If the Eagles can play more consistently on defense, this is one of the top teams in the entire league (and my early NFC East favorite).

9. Will Randy Moss play a significant role for the 49ers?

A lot of hype surrounding Moss this offseason in San Fran and I’m wondering if he is anything more than just a situational player for Jim Harbaugh’s offense. If he can run the 9 (fade) route vs. Cover 2, beat press-coverage, put some stress on top of the defense and flip the field, then the Niners have something to work with here. But after a year away from the game, I have my own questions as to how productive he can be in 2012.

10. Which QB competition carries the most weight?

I’m going to say Seattle and Tennessee. With Pete Carroll’s club, is it possible that new free agent Matt Flynn would lose out to a rookie in Russell Wilson and a veteran holdover in Tarvaris Jackson? And down in Nashville, when will Jake Locker take over the huddle from Matt Hasselbeck? The key—for both clubs—is to find a No.1 guy and give the rest of the roster a QB they can believe in. And you can't let the decision linger late into August. That’s crucial.

Five more to think about…

- What will we see from Sam Bradford in St.Louis?
- Can the Lions develop the run game?
- Are the Texans even better defensively in Wade Phillips’ second season?
- How does Todd Haley structure the Steelers offense?
- When will Adrian Peterson be back on the field?

Monday: How to evaluate DBs during camp