After catching up on all of the Week 15 Sunday action in the NFL, here are five questions I have this morning. Let’s run through them…

1. Is there any doubt in Colin Kaepernick after the Sunday night win?

We already know the second-year pro gives Jim Harbaugh some options within the offense because of his skill set. However, look at what Kaepernick did last night in the passing game. Four TD passes on the road vs. New England? That’s real production. Sure, Kaepernick did throw the INT in the red zone (Sting route vs. Cover 2). That’s a mistake based on inexperience. But if we go back to the TD pass to Delanie Walker (looked off the FS in Cover 3), the seam route to Michael Crabtree vs. 2-Deep or the “hot read” vs. pressure for the winning score, I don’t think we can question his ability to make plays. The next step for Kaepernick? Production on the playoff stage. I’m anxious to see that.

2. Do we take Aaron Rodgers for granted? 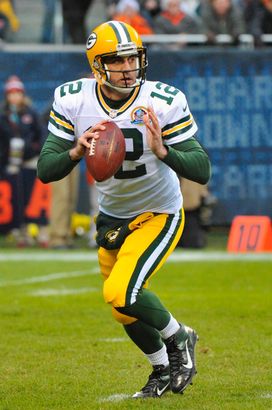 US PRESSWIRERodgers threw three TD passes during the Packers 21-13 win over the Bears.

With so much attention put on the return of Peyton Manning, the rookie QBs and Tom Brady, I’m starting to think we don’t give enough credit to Rodgers and his production in Green Bay. Watching the QB on Sunday in the win over the Bears, I’m still impressed with his athleticism in the pocket, his footwork vs. pressure and the ability to make stick throws against tight coverage. Remember, this O-Line in Green Bay isn’t a top tier unit and this team has been beat up all season. Rodgers is playing at a high level.

3. Did Brandon Carr know what was coming in OT?

Hear me out on this as we talk WR splits. During the Cowboys’ OT victory over the Steelers, Brandon Carr stepped in front of a Ben Roethlisberger pass and took the ball back to the one-yard line to set up the winning FG. However, go back to pre-snap split of Mike Wallace. The WR was aligned at the bottom of the numbers. That’s a key to play for the out route (WR shortens split to create room on the sideline). Sure, Roethlisberger left this ball to the inside. I get it. But watching the replay, Carr was in a position to jump the route playing Cover 3. And this is why pro DBs study splits and formations.

4. Is it time to point the finger at Flacco in Baltimore?

The Ravens fired offensive coordinator Cam Cameron this past week and turned the game plan over to Jim Caldwell. Did anything change? Not really. It is easy to blame coaches (players do it all of the time). But eventually we have to look at the guys in the locker room and their lack of production—regardless of the Xs and Os. Flacco (20-40-254-2 TDs-1INT) and this Baltimore offense continued to struggle on Sunday in the loss to the Broncos. And maybe its time to focus on the QB position for some answers.

5. Did Pete Carroll and the Seahawks run up the score on the Bills?

The fake punt the Seahawks ran with a 47-17 lead is going to drive some discussion, but I do believe Carroll’s comments after the game. I played special teams for seven seasons in the NFL and everyone has a fake punt in their game plan. When do you run it? That’s based off of what the Personal Protector (lines up behind the center) reads at the line of scrimmage. If you get the look you saw on tape everyday in meetings and from the scout team on the practice field, then go with it. However, there comes a time when the head coach has to put it to bed. That’s on Carroll. Call it off and warm up the bus for the airport. And by the way, the Seahawks are rolling.