Let’s look ahead to the Week 16 schedule in the NFL with a focus on personnel and game plans. Here are the five matchups that I will be watching. 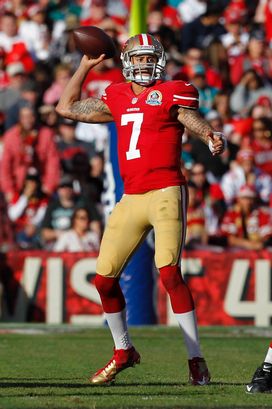 US PRESSWIREKaepernick has to matchup with the talent of the Seahawks' safeties on Sunday night in Seattle.

1. Colin Kaepernick vs. Kam Chancellor/Earl Thomas: The second-year pro lit up the Patriots secondary this past Sunday, but I’m anxious to see him play vs. the talent Seattle has at the safety position. Thomas has the range and speed to make plays from the deep middle of the field in Cover 1 and pressure schemes. Plus, don’t forget about the size and length of Chancellor in matchups vs. TEs Delanie Walker and Vernon Davis. This will be a test for Kaepernick vs. two of the best young safeties in the NFL. Can the QB make the proper reads and protect the ball? We will find out on Sunday night.

2. Eli Manning vs. Ed Reed: When looking at the Giants passing game, think of Victor Cruz inside of the numbers (Seam, Hi-Lo) and Hakeem Nicks on deep inside breaking cuts. However, for Manning to work the middle of the field he has to account for Reed in both single high safety defenses (Cover 1, Cover 3) and 2-deep schemes (Cover 2, 2-Man). The Giants' QB has to hold Reed in the middle of the field and be smart with the ball to target the deep dig (square-in) or the inside seam. This Ravens’ defense isn’t a top tier unit, but Reed can still break on the ball. Manning can’t give him a free one.

3. Adrian Peterson vs. Texans’ Front Seven: With the way Adrian Peterson is running, no one is going to shut down the Vikings’ RB. However, can the Texans limit the big plays and yards after contact? It is critical to tackle in the open field vs. Peterson, stay disciplined in your run fits, get multiple hats to the ball carrier and win on early down and distance situations. Easy for me to say, but if the Texans can force the Vikings into 3rd and 7-plus situations where Wade Phillips can bring pressure, I don’t see Christian Ponder beating this Houston secondary.

4. Rob Ryan vs. Drew Brees: Tony Romo and the Cowboys’ offense should move the ball vs. the Saints, but how does the Dallas defensive coordinator game plan for Brees? That’s what I want to find out. Is this a game where Ryan brings pressure early or will see more zone based schemes vs. the Saints? With Morris Claiborne expected back in the lineup, I like the matchup of the Cowboys’ CBs vs. Colston, Moore and Henderson. Think Xs and Os here from the perspective of the Cowboys' defense in a crucial late season game.

5. Brandon Marshall vs. Patrick Peterson: I like Peterson’s skill set. The Cardinals’ CB is physical, will use his hands at the line of scrimmage and wants to compete. And we know the ball is going to Marshall within the Bears’ game plan. This is a matchup that will be won at the line of scrimmage. Focus on the release, Marshall’s ability to gain leverage inside and the closing speed of Peterson. In a game the Bears must win, Marshall will have to carry the load once again in the passing game.