Looking back on the Week 16 NFL schedule, here are five things that stood out from my perspective—starting with Russell Wilson’s production in the win over the 49ers. 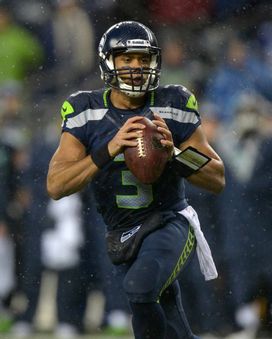 US PRESSWIREWilson and the Seahawks ran up 42 points on the 49ers Sunday night.

1. Russell Wilson on the prime time stage: If you were watching Wilson play Sunday night vs. the 49ers, then you saw the ability he brings to the Seattle offense. Sure, the Read Option adds to the playbook and it is tough to prep for when Marshawn Lynch is also in the backfield. However, I’m more focused on the rookie’s ability to navigate the pocket, get to the edge of the defense and make the tough throws. Focus on the deep out, the 7 (corner) route in the end zone, etc. Can we put him in the discussion for the Rookie of the Year award? Sure we can after Wilson and the Seahawks dropped 40-plus on one of the best defenses in the NFL.

2. Ponder, Vikings beat up the Texans: I had no problem saying the Texans could win this matchup if they limited the explosive gains from Adrian Peterson (25-86) and put the game plan in Christian Ponder's hands. Well, that didn’t happen because the Vikings’ QB played some good football and the Minnesota defense shut the door on Houston. Ponder made plays with his feet, escaped pressure, protected the ball and did enough in the passing game (16-30-174-1TD) to put the Vikings in a position to get a win on the road vs. a quality defensive team. And now all Minnesota needs is a win at home next week vs. the Packers to punch a ticket to the playoffs.

3. Roethlisberger’s 4th quarter INT: This is the type of play we are accustomed to seeing the Steelers’ QB execute. Extend the pocket, allow the WRs time to convert their routes and make the stick throw to continue the drive. However, with the Bengals playing Cover 2, Roethlisberger sailed a ball intended for Mike Wallace and Bengals safety Reggie Nelson was waiting in the deep half for a classic “basket” interception. That play helped set up Cincinnati for the game winning FG and it also knocked the Steelers out of the playoff mix. Think about it: that’s now two straight games where Roethlisberger has thrown an INT in a crucial situation.

4. Giants continue to slide: Look at the last two weeks for the Giants. That tells you the story here. Inconsistent play on the offensive side of the ball, a lack of production from Eli Manning and a defense that is getting lit up. This Ravens’ team came into Sunday under a lot of heat, but Joe Flacco, Ray Rice and the rest of the offense put up over 500-total yards of offense vs. the Giants. The New York defense isn’t getting the big plays up front along the D-Line and that is exposing the secondary outside of the numbers. Tom Coughlin’s club needs some help to get back to the post season if they want to defend the title.

5. Falcons’ play calling: On Saturday night, Matt Ryan and the Falcons played every bit like a pro offense during their win over the Lions to lock up the No.1 seed in the NFC. The run game, the screen passes, the multiple personnel groupings and the vertical shots down the field to WRs Roddy White and Julio Jones. This is a tough offense to stop when Atlanta opens up the game plan and goes to work. And when you mix play calling, use balance and highlight some real talent at the skill positions, you are going to score points.