Let’s take a look at the Week 17 schedule in the NFL. Breakdowns, personnel and some Xs and Os on the final Sunday of the regular season. Here are five things to watch tomorrow.

1. Cowboys, Giants defensive secondaries: With the talent Eli Manning and Tony Romo have to work with at the skill positions, I am looking at this NFC East title game from a defensive perspective in the secondary. Go back to the Week 14 matchup. What did we see? Blown coverages, missed tackles and an overall poor brand of football from both defenses. I want to see who can play blitz-man coverage, win in a press alignment at the line of scrimmage and take away the vertical game. Both Perry Fewell and Rob Ryan will use multiple pressure packages in their defensive game plans and that puts DBs in one-on-one situations where they have to make a play. 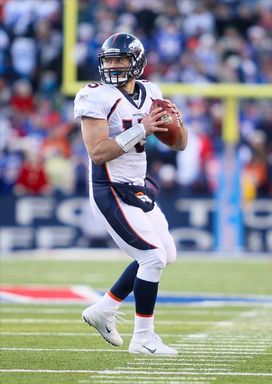 ICONCan Tebow produce, protect the ball and win the AFC West title on Sunday vs. the Chiefs?

2. Tebow’s decision making: The Broncos’ QB struggled in the Week 16 loss to the Bills and had issues seeing the field from my perspective. You look at the seam route he threw vs. a single high safety or the ball he forced into the middle of the field outside of the pocket. Two throws you can’t make in the NFL. I expect the Broncos to lead with their run package vs. the Chiefs. That’s their game plan. However, if Kyle Orton can put points on the board for K.C., Tebow will have to make some throws vs. a secondary that can play man coverage. An AFC West title at stake for Denver tomorrow.

3. Dalton vs. the Ravens' pressure: Have to start with ball security for the rookie QB. In their first matchup of the season (a Baltimore win), Dalton threw three INTs. We know what he is going to see: overload pressure, zone-blitz concepts, 2-Man, etc. Throwing the deep ball to A.J. Green might look good in practice vs. the scout team, but against this Ravens’ defense I would focus on the quick, 3-step game vs. pressure. And in that situation, the TE position comes into play. An opportunity tomorrow for Jermaine Gresham to play a big role in the game plan as the Bengals play for a ticket to the AFC playoffs.

4. Palmer vs. the Chargers secondary: Go back to this past Saturday and turn on the tape from the Lions-Chargers matchup. This is a San Diego secondary that Palmer can target in the vertical game and working underneath concepts inside of the numbers. Plus, whenever we discuss the Raiders’ playbook, think hard play action and the vertical route tree with WRs Darrius Heyward-Bey, Jacoby Ford (who is expected to play) and rookie Denarius Moore. Legit speed outside of the numbers and opportunities for Palmer to stretch the field.

5. The No.1 overall pick: I can tell you that veteran players could care less about the draft right now as they head into Week 17, but we know this is a story because of Stanford QB Andrew Luck. The Colts travel to Jacksonville to play the Jags and the Rams host the 49ers. And by tomorrow afternoon, we will find out which team will be on the clock first in April. The next question: will that No.1 overall pick be for sale if the Rams end up controlling the top of the draft? Plenty of time after the Senior Bowl and the Combine to get into that discussion.