Here are three plays that stood out from my perspective on the Week 9 Sunday schedule in the NFL. Let’s break them down and get into some coaching points. 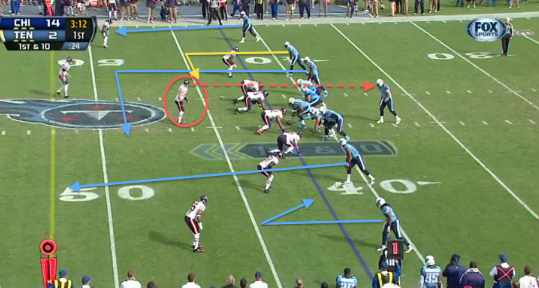 - Cover 1 (man-free) from the Bears with FS Chris Conte walked down over the TE and MLB Brian Urlacher playing the “Rover” (inside hook drop, read the QB). This gives the Bears help on two levels: inside hook and the deep middle of the field. Play with outside leverage and funnel receivers back inside of the numbers.

- Nothing complicated here from the Titans. A Smash-Seam concept to the open (weak) side of the formation with the Hi-Lo to the closed side. The TE will release up the field on the intermediate dig route (Hi) with the slot receiver on the inside shallow crosser (Lo). A concept we see in every club’s offensive playbook. 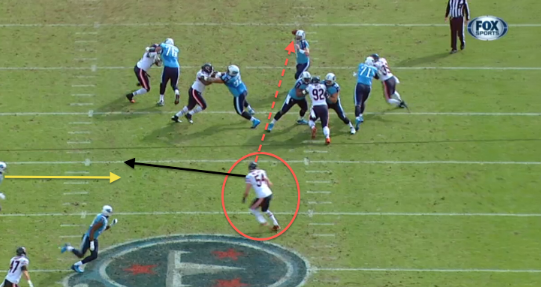 - By playing the inside hook, Urlacher will take his drop, read the QB and break on the throw. As a “rover” in Cover 1, let the QB take you to the play.

- Hasselbeck can’t throw this ball. I was surprised to see the veteran QB force this one. He is locked in on an inside breaking cut and brings Urlacher right to the play. 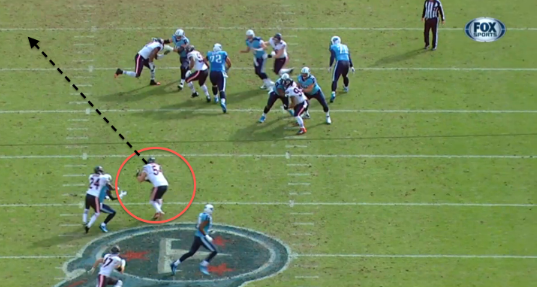 - This is exactly how Cover 1 “Rover” plays out on the chalkboard or in the game plan on Wednesday. All Urlacher has to do is read the eyes of Hasselbeck, break on the throw and then get to the sidelines for six points. Just one of the five turnovers the Bears defense produced today as they whipped the Titans 51-20 down in Nashville to move to 7-1 on the season. 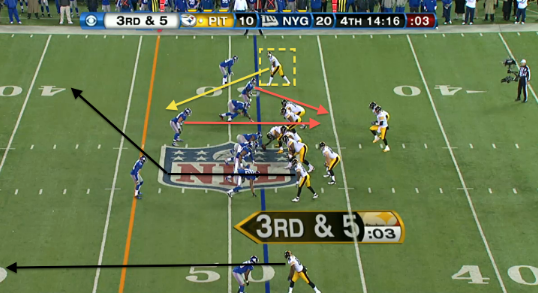 - 3rd and five situation with the Giants bringing open side pressure. Rush six and play man-free in the secondary. Smart call given the down and distance. Try to get home with six and force Steelers’ QB Ben Roethlisberger to get rid of the ball with FS help in the deep middle of the field.

- Check out Wallace (highlighted in yellow). This is a blitz read (or a “hot”). Read pressure (vs. press-coverage) and run the slant. The CB has to use his hands on the release, drive to the up field shoulder and make the play. 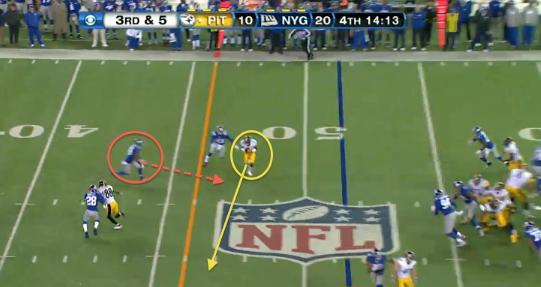 - Angles to the ball. I always talk about it when looking at the safety position. Giants’ FS Antrel Rolle (highlighted in red) is patient with his footwork, reads the 3-step route and drives downhill to make the play. However, the safety takes a poor angle vs. the speed of Wallace and allows this route to get out the gate. 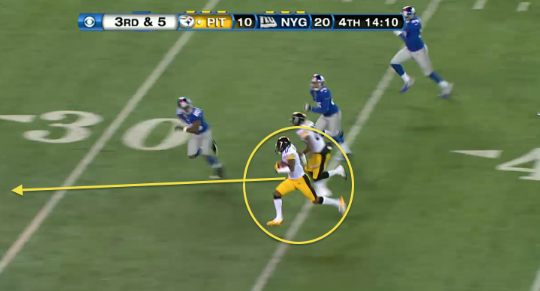 Speed. Legit speed. That’s Wallace after the catch right here. Again, we are talking about a simple blitz read and a route we see in high school ball on Friday nights. However, when the WR wins at the line of scrimmage on the slant (and beats the FS) this is going to turn into an explosive play. A 51-yard TD for Wallace in the Steelers’ 24-20 comeback win over the Giants. 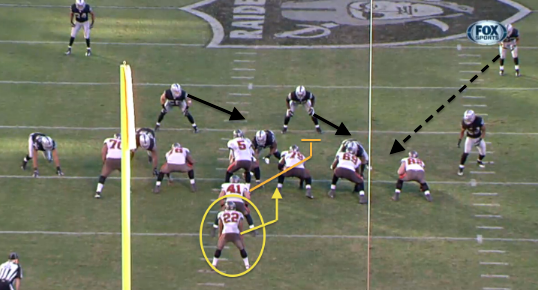 - Base power football from the Bucs. Pro I alignment, run the Lead Strong vs. a seven-man box (SS will fill C gap). This is what you get from Schiano’s club in the run game. Line up and get downhill. 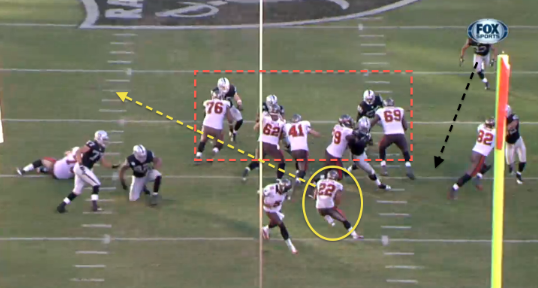 - The Raiders are going to flow to the play side (Will and Mike Backer) with the SS filling in the front. In quarters, the SS will read the TE (No.2) for his run/pass key and then fill the C gap to create an eight-man box.

- The Bucs get a cut block from the LT and work up to the second level vs. the Will and the Mike. With the SS showing in the C gap, Martin is going to use his vision to find a cut back lane and get vertical up the field. 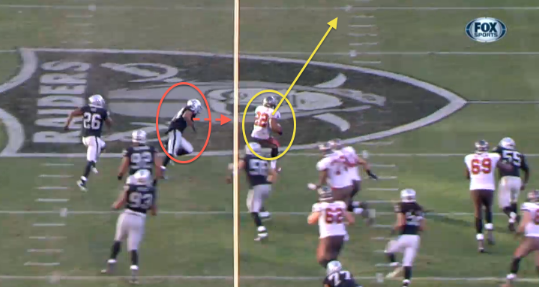 -I just talked about angles to the ball above and it is no different in the run game. Watching Martin fill up the box score (254-yards, 4 TDs) vs. the Raiders, I didn’t think the secondary of Oakland adjusted to his speed based on the poor angles they took in the open field. And if you get caught taking a flat angle to the ball vs. Martin, it is going to lead to six points. He can run.