Let’s take a look back at the Week 10 Sunday schedule in the NFL. Breakdowns, matchups, plus some Xs and Os. Here are ten topics you should be talking about today… 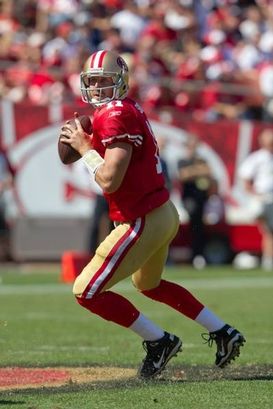 ICONAlex Smith and the 8-1 49ers play with a style that is built for playoff football.

1. 49ers win—again: A lot of eyes on the 49ers because of the matchup with the Giants. The results? More of the same for Harbaugh’s club. This team has a five game lead in the NFC West and is built to win in the playoffs. They force turnovers on defense, can run the football against any front seven in the NFL and get enough from QB Alex Smith to move the sticks and take some chances in the passing game. A legit threat to the Packers in the NFC? Too early for that kind of talk. However, don’t look past the 8-1 Niners—because this might be the most physical team in the NFL.

2. Bears' defense continues to produce: The Bears once again put the Tampa 2 defense in their back pocket and leaned on there Cover 1 (man-free) and zone pressure schemes. I saw a secondary that challenged receivers, forced turnovers, took away the big play and shut down Matthew Stafford and the Lions offense. The Bears produced six total turnovers on defense (4 INTs vs. Stafford, 2 forced fumbles), two touchdowns and had control of this game going back to the1st quarter. And when Lovie Smith's defense makes plays on the football (and produces points), it is time to start rolling up wins in Chicago. The finger injury with Stafford? It should be discussed, but if you are going to stay on the field, you have to make the throws.

3. Patriots’ Gronkowski: When the Jets had to match up CB Darrelle Revis on Gronkowski last night, it was a good sign Rex Ryan didn’t have an answer for the Patriots’ game plan. Removed from the core of the formation, Gronkowski becomes a weapon when he runs inside breaking routes (think slant, dig, post). With his size, a safety—or CB—isn’t going to be able to compete when playing with an outside shade. Tough matchup right there. The Patriots’ TE finished with 8 receptions, 113 yards and 2 TDs and got a big second half from Tom Brady (26-39-329-3 TDs) in the 37-16 win over Rex and the Jets.

4. Falcons’ 4th down gamble: There should be some questions for Atlanta today after they failed on a fourth down attempt (inside of their own 30-yard line) in OT—but only because they didn’t convert. The Falcons went with the base Power O scheme (FB kick out, backside Guard pull). The No.1 downhill run in their playbook. I understand this set up the Saints up to steal a big divisional win with a field goal, but if you can’t run your base offense (in a crucial situation), that’s saying something. My call? Tough to give the ball back to Brees and the Saints offense on a punt when you want to trust your run game to move the sticks.

5. Time to panic in Philly: Two weeks ago, it was time to jump on the Eagles’ bandwagon after the impressive Sunday night win over the Cowboys. Today, we are talking about a 3-6 football team that has had two straight weeks of inconsistent play from QB Michael Vick to go along with defense that still can’t close out ball games in the 4th quarter. Larry Fitzgerald made plays all afternoon (7-146-2 TDs) vs. the Philly secondary (with John Skelton at QB) and Vick tossed three interceptions. This is an overrated football team and I am just as guilty for hyping them up back in August. 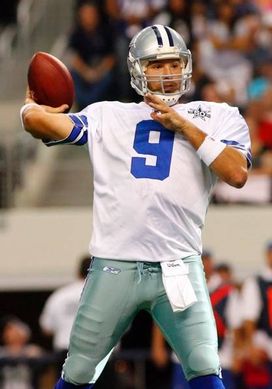 6. Romo lights up the Bills: Go back to Romo’s first TD pass in the Cowboys’ 44-7 blowout win over the Bills in Dallas. Straight 9 (fade) route to WR Dez Bryant vs. CB Leodis McKelvin playing off-man coverage. The result? Bryant goes up and takes the ball away at the point of attack for the TD. That continued all afternoon when Romo saw man-coverage. Throw the vertical passing game, work the secondary in the red zone and have a day that was near perfect. The Cowboys’ QB completes 23 of 26 passes for 270 yards and 3 TDs.

7. Ravens fall in Seattle: That’s a bad loss for the Ravens. No other way to spin it. Turnovers in the kicking game, an offensive game plan that had to focus on the drop back passing game and a defense that couldn’t get off the field vs. the Seahawk’s 4-minute drill to ice the game. However, I still go back to what the Ravens did offensively, because it is very similar to what we saw in the Monday night loss at Jacksonville. Flacco attempted 52 passes and Ray Rice finished the game with five (yes, five) carries. There has to be balance, and even if you are down early, don’t take the ball out of the hands of your top play maker. Different team out in Seattle than we saw last Sunday night in the comeback win vs. the Steelers.

8. Roethlisberger and the Steelers’ offense: The Steelers were able to lean on RB Rashard Mendenhall and the run game inside of the 10-yard line, but I like the spread looks Pittsburgh used in the 24-17 win over the Bengals. Use empty alignments and give Ben Roethlisberger opportunities to work the secondary with Heath Miller in the middle of the field and the speed of Mike Wallace and Antonio Brown outside of the numbers. Plus, when the protection breaks down, Roethlisberger (21-33-245-1 TD-1 INT) is still one of the best in the game at extending the play, keeping his eyes up the field and finding targets in the passing game.

9. Tebow completes two passes--in a win: Two completions. That’s it. Tebow goes 2 of 8 for 69-yards. However, the one deep ball he hit comes in the 4th quarter on a 56 yard score to WR Eric Decker. The Denver game plan? Something you might see in a high school playoff game. The Broncos ran the ball 55 times for 244 yards (and that’s with both Willis McGahee and Knowshon Moreno leaving early with injuries). Denver ran the ball out of the gun, used the read option look and got downhill in the power game. The next question: can they ride this style of offense? I’m not buying it. They saw something on tape this week they could exploit vs. the Chiefs front seven, but moving forward, Tebow will have to throw the ball if Denver wants to stay in the mix in the AFC West.

10. Don’t forget about the Texans: I’m impressed with this football team. They have adapted their play calling on offense without WR Andre Johnson and continue to run the ball with real production. The combination of Arian Foster, Ben Tate and Derrick Ward carried the ball 44 times for 185 yards and 3 TDs. And on defense, Wade Phillips’ unit (without Mario Williams) continues to play at a high level and force turnovers. The Texans sit atop the AFC South at 7-3 and we should call them the favorite to win that division. Good use of talent and solid coaching down in Houston right now.

Check back to the NFP on Monday afternoon for my Week 10 Game Balls and some pre-game notes on the Vikings-Packers matchup at Lambeau.