Let’s go back and take a look around the league. Breakdowns, game notes, etc. from the Week 14 Sunday schedule in the NFL. Ten things you should be talking about today—starting with Eli Manning and the Giants win in Dallas.

1. Manning, Giants take control of the NFC East: There was some sloppy football when we break down the secondary play for both the Cowboys and the Giants last night, but this discussion is all about the Giants’ QB. Again, we watched him play at a top-tier level, make throws in the 4th quarter and win a game when this entire team puts the game plan in his hands. Manning took the Giants down the field on that final drive, hit TE Jake Ballard and set up Brandon Jacobs winning TD run. The veteran finishes with 400 yards passing in a win that puts the Giants on top of the NFC East. And New York hosts this same Dallas club to close out the season in Week 17. 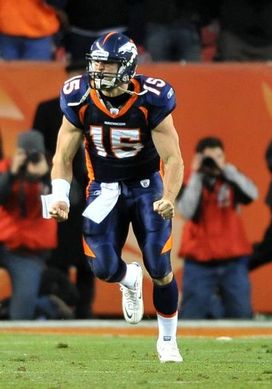 ICONTebow is now 7-1 as a starter this season for the Broncos.

2. Tebow, Broncos do it again: Hard not to buy into Tebow and this Denver team after watching them come back to beat Lovie Smith's Bears. No question we should discuss the mental lapse from Chicago’s Marion Barber running out of bounds late in the 4th quarter and the OT fumble. However, I saw a QB start the game 3-16 with an INT and finish (against a solid defense) by going 18-24 for 191 yards and a TD. Tebow was able to extend plays, work over the Bears’ Cover 2 scheme and produce points. We can sit back and break down his style of play (finding plenty of limitations), but I can’t get past his record as a starter: 7-1. And the big plays keep coming (on both sides of the ball) from John Fox’s team late in ball games.

3. Time to look at 16-0 in Green Bay: The Raiders didn’t belong on the same field with the Packers yesterday. No other way to spin it. Rodgers had complete control of the game plan (again), Green Bay won up front in the run game and the defense produced five turnovers vs. Carson Palmer (4 INTs) and Oakland. Looking ahead at the schedule, Mike McCarthy’s club travels to Kansas City, hosts a Chicago team on Christmas night that is going backwards and then closes out with Detroit at Lambeau. Even with the knee injury to Greg Jennings, is there any reason we shouldn’t be talking about the Packers going 16-0? Because I can’t see any of those teams pulling an upset when Green Bay executes on offense and generates takeaways on the defensive side of the ball.

4. T.J. Yates passes a big test vs. Cincy: Since the injuries to Matt Schaub and Matt Leinart, I have been asked about the Texans as a legit playoff threat in the AFC. My response? Defense and a running game will get you to the post season, but I wanted to see rookie T.J. Yates make some plays with the game on the line. And that’s exactly what I saw yesterday in the win over the Bengals. Yates took this offense down the field (without any timeouts) and got the ball in the end zone. The route scheme to win it? A smart call from Gary Kubiak going with a inside breaking route (underneath smash route) that gave Yates a clear read in the middle of the field. The rookie connected with Kevin Walter on a 6-yard score and the Texans got on the plane with a 10-3 record. Yates threw for 300-yards, but that final drive is what stands out from my perspective.

5. More Gronkowski: Forget Tom Brady getting into it with one of his coaches on the sidelines (because this can happen quite often in the NFL) and focus on the Patriots’ TE. I still don’t know how you should game plan Gronkowski in the red zone. Play Cover 2 and he is going to matchup against a Mike Linebacker running the inside vertical seam. Play Cover 1 with outside leverage and Gronkowski will use his size, length and route running ability to win. We saw that again yesterday in the Patriots 34-27 win over the Redskins at Fed Ex. Straight seam route for a TD to break the all-time single season record for touchdowns at the TE position. And don’t forget about what he can do after the catch out in the field, because the Redskins’ defenders had multiple issues just trying to get him on the ground.