Let’s go around the league and take a look back at the Sunday schedule in the NFL. Ten topics you should be talking about today, starting with the news of Cutler’s thumb injury for the Bears. 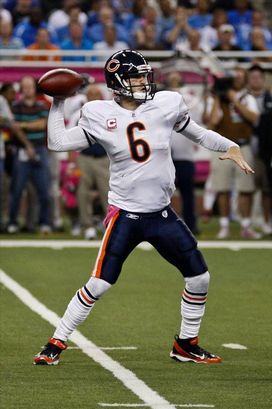 ICONThe Bears were a legit playoff threat before the injury to Cutler.

1. The impact of Cutler's injury in Chicago: The reason I’m not going to count out the Bears after the thumb injury to Jay Cutler is because of the way this club is built under Lovie Smith. Force turnovers on defense, set up field position with Devin Hester in the return game and ride Matt Fore in the game plan. There should be an expected drop off in production with Caleb Hanie now taking snaps for Chicago. Even though the playbook won’t change under Mike Martz, Hanie doesn’t have the skill set in the pocket or the arm strength of Cutler. However, as I wrote on Sunday night, Lovie can coach and this team can still make a playoff push because of their style of play.

2. Jordy Nelson’s numbers: Is the Packers’ WR underrated? No question about that. And if you watched Green Bay move to 10-0 vs. Tampa (with a real shot at running the table), you saw his play making ability. He can beat press-man at the line of scrimmage, run clean routes and separate when the ball is in the air. The Bucs wanted to challenge Aaron Rodgers and play man-coverage. But when the Packers needed to close this game out, Rodgers hit Nelson (6-123-2 TDs) on a straight 9 (fade) route for a 40-yard score. Just another weapon for an offense that continues to beat every game plan you throw them.

3. Vince Young gets the win over the Giants: We have to mention Juan Castillo’s defense before we get to the Eagles’ QB. This unit pressured Eli Manning, forced turnovers and shut down the running game of the Giants. With Young, he was up and down. Make some poor decisions with the football, missed on the deep shot to DeSean Jackson and looked like a QB that hadn’t been playing meaningful minutes on Sunday. However, go back the game winning drive and the TD pass to Riley Cooper. A standard “Hi-Lo” concept from Andy Reid’s playbook. Work two inside breaking routes and target Cooper over the second level of the defense on the short post/dig. A route the Eagles have been running for a decade. Big throw from V.Y. (23-36-258-2 TDs-3 INTs) in that type of game situation to keep the Eagles alive.

4. Lions’ running game: We should give some real credit to Matthew Stafford in the Lions’ 49-35 win over the Panthers. Detroit's QB made some questionable throws early that resulted in INTs, but finished with 5 TD passes after this club was down 24-7 in that ball game. However, don’t forget about Kevin Smith—because his production is key. The RB rushed for 140-yards and 2 TDs. And when this offense can run the football with production, they will be tough to game plan for. That is an added dimension they must have to make a push to the playoffs and compete with the Packers on Thanksgiving day. All season I have said the Lions remind me of a Big 12 team when you break down their offensive game plan, but Smith can change that is we continue to see the numbers.

5. Balance to the game plan in Baltimore: After the loss in Week 10, we should have questioned Cam Cameron and his call sheet in Baltimore. You can’t consistently win when Joe Flacco is throwing the ball 50-plus times. On Sunday? A different story in the win over a solid Bengals’ team. Ray Rice posted over 100 yards and 2 TDs (on 20 carries). And when you force opposing defenses to walk a safety into the box, it will open up big play options outside of the numbers. The result: a huge day for Torrey Smith. The rookie WR caught 6 passes for 165-yards and a TD. Good things happen when you get the ball to Rice and feature him in the game plan. 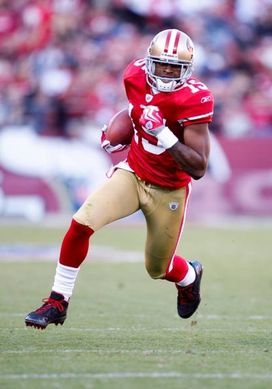 ICONCrabtree and the 49ers have won eight straight games to move to 9-1.

6. Make that eight straight for the 49ers: I feel like I am writing the same thing about Jim Harbaugh's club every week—but that happens when you consistently win in the NFL. This San Fran defense came to play on third downs, took the ball away from the Cards and ended any talk of a QB controversy in Arizona by shutting down John Skelton. Offensively, Michael Crabtree (7-120) made some plays and the 49ers ran the ball almost 50 times. I’m very interested to see them play on Thanksgiving night vs. the Ravens. That should be some good, physical football to check out.

7. Here come Romo and the Cowboys: The Redskins got some solid play from QB Rex Grossman and had a shot to win it in OT, but the Cowboys come out of Fed Ex with the win. And it starts with Romo’s production and ability to protect the ball. Both of his TD throws came when the pocket broke down and he had to extend the play. However, I still look at the decision making when grading out Romo. Because if he can avoid turning the ball over, the Cowboys can put a run together to win the NFC East.

8. The Bills continue to slide: What happened to Buffalo? This team was hot at the beginning of the season and consistently came up with game changing plays. That’s not the case anymore after another loss. This time, Matt Moore and the Dolphins beat them up 35-8 down in Miami. Ryan Fitzpatrick isn’t producing, this defensive front can’t get to the QB and the secondary is being exposed. And when we talk about the top teams positioning for the playoffs, it is hard to mention the Bills. Different ball club than we saw in the early season wins over the Patriots and the Eagles.

9. Falcons’ are still in the mix: Another team hanging around in the NFC playoff race that could benefit (like the Cowboys) from a Bears’ slide down the stretch. I talked about balance to the game plan with the Ravens and it is no different with the Falcons. Matt Ryan threw for 316-yards in the win over the Titans, Roddy White was big in the vertical game (7-147) and Michael Turner (the key to this offense) produced 100 yards with over 20 carries. There is still a lot of time to play out after the Thanksgiving holiday in the NFL, but this is a team to keep an eye on.

10. Chargers are in trouble: There are some positives from the loss to the Bears on Sunday, including the play of WR Vincent Jackson who proved again that he is one of the top vertical threats in the game. However, the turnovers on offense, the lack of consistency from QB Philip Rivers and the overall play of the secondary is a problem. That's five straight losses for a team that looked to be in a position to win the AFC West early in the season. Still time to get back into the mix, but right now can anyone buy the Chargers as a true player in the AFC?