Let’s go back and talk Sunday football in the NFL. Here are then things I saw that we need to discuss today after checking out the Week 9 games. Breakdowns, personnel, plus some Xs and Os.

1. Another 4th quarter win for Eli: That’s five wins generated by the Giants’ QB this season in the final frame. No question Manning made some mistakes in Foxborough vs. the Patriots (go back to the 2nd half INT on the corner route in the end zone), but we need to focus on how he finished. Third down on the final drive, Eli hit the deep inside seam route. And on the goal line, he threw the Flat-7 (corner) combo out of the Giants’ Heavy personnel for the win. A classic play fake to the open (or weak) side of the formation. Another big win for the 6-2 Giants and Eli has this team alone in first place.

ICONIs there a defensive game plan that can limit Rodgers and the Packers' offense?

2. Rodgers lights up the Chargers: He is best in the NFL. And on Sunday, Rodgers made the “tough” throws almost look routine. Take the fade route to Finley or the back-shoulder throw to Nelson. Perfect ball placement in matchups the Packers can win. And, to be honest, if you have the game plan that can stop Rodgers, I want to know what it is—because I can’t figure it out. Look at these numbers vs. the Chargers: 21-26-247 yards- 4 TDs (plus 52 yards rushing). MVP numbers for Rodgers and the 8-0 Packers.

3. Two straight losses for the Patriots: Tom Brady is going to score points and put drives together, but over the last two weeks, he looks vulnerable. Why? Pressure and aggressive play from the secondary. That’s exactly what we saw from the Steelers’ defense in Week 8 and on again Sunday from the Giants. Move Brady off the spot with pressure, take away the intermediate route tree in the Patriots’ offense and drive on inside breaking routes in the secondary. Give Brady a lot of credit here for putting the Pats in a position to win in the 4th quarter, but completing only 28 of 49 passes isn’t what we expect to see from the QB.

4. Flacco's final drive: Made the throws to win the game. The Ravens' QB goes 92-yards vs. the Steelers' defense, overcomes a drop in the end zone and ends up hitting rookie WR Torrey Smith on the straight 9 (fade) route vs. Cover 1. Baltimore saw zone pressure, Cover 2, etc. on that drive. Flacco used Anquan Boldin inside of the numbers, worked the sideline and continued to move the ball. Think of the situation here. Divisional matchup vs. a top tier defense. Flacco had complete control of the 2-minute drill and this ball club now moves to first place in the AFC North. You won't see many 2-minutes drills as good that when we consider the defense Flacco was working against and the situation.

5. Jets roll in Orchard Park: This is the Jets team I expected to see all season. Big matchup vs. the Bills and Rex Ryan’s club wins up front on both sides of the ball. They were the more physical team and I like what I saw from a game plan perspective on offense. The pick Mark Sanchez (20-28-230-1 TD-1 INT) threw in the end zone on the opening drive needs to be corrected in the film room, but take that play out and we are talking about an aggressive game plan. Lead with Shonn Greene and the run game, use play action, target WR Plaxico Burress on inside breaking routes and test the Buffalo secondary. The Jets clearly out played a good Bills’ team in the 27-11 win.

6. No surprise with Harbaugh, Niners: What did we see from the 49ers on Sunday in the 19-11 win over the ‘Skins in D.C.? More of the same, really. Efficient production from QB Alex Smith (17-24-200-1 TD), a ground game led by Frank Gore (19-107) and a defense that attacks the QB and forces turnovers. And if you haven’t bought into Harbaugh and this team yet, get on the train. They are well coached, play with good technique, and with a 7-1 record should run away with the NFC West title. You aren’t going to see the numbers the Packers put up in Harbaugh’s system, but you will see the wins. That sells. 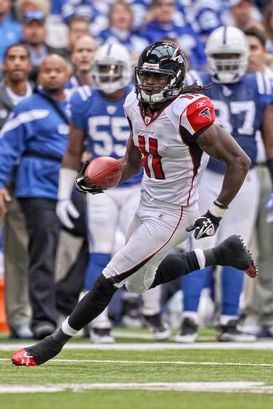 ICONWith Julio Jones healthy, keep an eye on the Falcons the second half of the season.

7. The Atlanta offense: When I look at the Falcons’ offensively, I see a unit I would want to coach. Start with the running game and Michel Turner, move to Gonzalez at TE, Matt Ryan at QB and the speed outside of the numbers. The same speed we saw from rookie Julio Jones in the 31-7 win over the winless Colts. Having the rookie WR healthy makes the 5-3 Falcons a tough matchup the second half of the season. And when you can take a 3-step slant route for 80-yards, you know have an added dimension to your game plan. Keep an eye on this club.

8. Dalton and the 6-2 Bengals: The rookie QB is improving, his game is more polished and the playbook in Cincy can be more creative because of his production. I like what I see from fellow rookie A.J. Green. A clean route runner, vertical speed and ball skills. However, in this league it starts at the QB position. I am impressed with Dalton. On the road vs. the Titans, the second round picks throws three TDs and directs the Bengals to ten fourth quarter points for the comeback win. Is this club talented enough to compete with Baltimore and Pittsburgh in the AFC North? We are going to find out.

9. Concern in Oakland: There should be after the 38-24 loss to Denver on Sunday. The Broncos gashed this Raiders' defense up front in the run game with Willis McGahee (163-2 TDs) and QB Tim Tebow (117-yards). And as a team, Oakland gave up 298-yards rushing. That’s bad football. However, what about Palmer at QB? The veteran threw 3 TD passes but also produced three INTs. And maybe that is the bigger concern here, because this Raiders offense was stale, dull and didn’t execute in the fourth quarter. That’s on the QB.

10. The Dolphins get a W: I can’t explain why the Chiefs couldn’t execute after beating the Chargers on Monday night, but Tony Sparano and the Dolphins deserved this win. QB Matt Moore threw 3 TD passes vs. a Chiefs’ secondary that played with an aggressive style last week, Reggie Bush was productive (142 total yards) and WR Brandon Marshall posted over 100-yards to go along with a score. Plus, when you add in a defense that held K.C to three points, we have to ask why it took so long to see some positive results from the Dolphins.